Jayson Bradley wrote something so powerful and on target that I felt I should highlight it here on my own blog:

Don’t tread on me

Christianity in America is so entangled with patriotism and exceptionalism. When asked to shelter in place, Christians don’t think it’s odd to deck themselves out in G.I. Joe cosplay complete with AR-15s to storm a government building and demand their rights.

But at the same time, they’re unflinching in their support of authority being misused against others.

When an unarmed black man or woman is shot and killed on camera, they instantly make excuses on behalf of authorities. That can look like trotting out an old mugshot to prove that person’s terrible character, or simply pointing out that they got themselves killed by not being obedient enough.

But when asked to stay home, patriots have no problem grabbing their guns and defying orders. The mixture of Christianity and Americanism is a troubling tincture, enabling people to cite Romans 13 to get others to obey authority while they stock up weapons to fight off a potentially tyrannical government.

Any religion that demands that others take up their cross while we take up our sword is not Christianity.

It’s strange, but nothing reveals the rot at the center of American Christianity like the response people have had to wearing masks. It requires zero sacrifice to put a mask on—but that’s still too much of an ask for many Americans.

Mask wearing is really the perfect litmus test for self-denial. It’s something we do for others. My mask protects you, and your mask protects me. It’s not only a legitimate way to stop the spread of germs, but it also communicates our care for others.

So when a store like Costco or Trader Joe’s refuses to allow someone in without a mask, it’s to protect their employees (who aren’t getting paid what they deserve) and other shoppers. They’re asking people to take the health of others seriously. Because the choice not to wear a mask doesn’t communicate that you’re OK with getting sick; it communicates that you’re OK with getting others sick.

It’s such a low bar for denying one’s self. And yet, there are people all over the country who refuse this small act of solidarity. Their discomfort and inconvenience is too big of an ask.

Read more on his blog Honest to God. 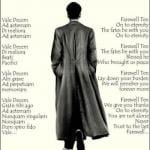 July 19, 2020 Vale Decem, Keep Your Faith: Choral Music of Doctor Who
Recent Comments
0 | Leave a Comment
"Sorry about that. Always feel free to email me to let me know!"
James F. McGrath The Contradictory Dates for the Birth ..."
"My reply from a few days ago seems to have gotten stuck, waiting for approval."
robrecht The Contradictory Dates for the Birth ..."
"I don't see that the thrust of this blog is economics at all. If it ..."
Bob Shiloh Christian Socialists
"I personally think that Matthew just invented his infancy narrative out of the Old Testament ..."
Chris H The Contradictory Dates for the Birth ..."
Browse Our Archives
get the latest updates from
Religion Prof: The Blog of James F. McGrath
and the Patheos
Progressive Christian
Channel
POPULAR AT PATHEOS Progressive Christian
1