Vale Decem, Keep Your Faith: Choral Music of Doctor Who

As I’ve been writing about the Doctor Who episode The Battle of Ranskoor av Kolos I’ve been paying close attention to elements that casual viewers might miss, at least at a conscious level. The lighting (or lack thereof) in the episode seems particularly striking to me. The music is as well, even when considered within the context of a season’s worth of distinctive music provided by composer Segun Akinola, whose approach to composition is very different from the melodic-symphonic character of many recent seasons, and yet very different at the same time from the ambient electronic music that characterized the show early in its history. The season finale is not the only episode the music for which features human voices that season, but it is the only one to feature voices singing chorally in four parts. The liner notes are available online. The composer writes, “The conclusion of the series, a moving story of faith, doubt, loss and hope offered the chance to return to the sound of The Woman Who Fell to Earth, whilst also encompassing many of the musical journeys we’ve been on up to this point.” The singing enters as Delph begins his creative work. It won’t be the last time. 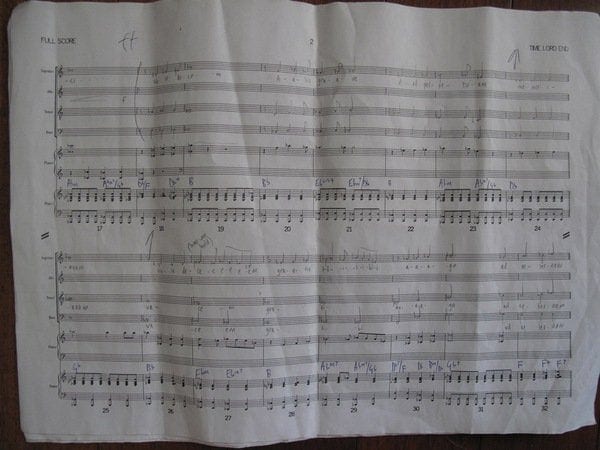 The show’s music has been interesting and extremely creative throughout its history, from its theme in its original form to the most recent episodes. Choral singing of a traditional hymn appeared famously in the episode Gridlock. What I hadn’t really paid attention to before now were the lyrics for the piece with the title Vale Decem (“Farewell Ten”) with Latin choral singing bidding the Tenth Doctor goodbye. It is in essence sung to the Doctor by the Ood. The music, I have no doubt, made a powerful impression on anyone watching the episode. It is the lyrics that I ignored. The lyrics alas are plundered from other works by a lyricist who wasn’t proficient in Latin and took bits that were useful from other pieces, not always producing a result that is grammatical. There is an analysis (and proposed grammatically correct alternative!) provided by Dr. Penelope Goodman of the University of Leeds on her blog.

For those who are interested in digging into it musically, there are arrangements of it on Musescore. You can listen to it here:

There is a powerful socially distanced rendition of “The Long Song” from The Rings of Akhaten that was uploaded to YouTube in May, performed by Borna Matosic and the Doctor Who: LOCKDOWN choir. It is available in two versions, with and without orchestral accompaniment:

Choir features in unreleased music from the episode The God Complex, a track with the title “Forget Your Faith in Me”:

Returning to The Battle of Ranskoor av Kolos, here is the track “Keep Your Faith” the title of which provides a good indication of why I was especially eager to have the chance to write about this episode. The human voices return to powerful effect here.

As someone with a passionate interest in Doctor Who, music, and the intersection of both of those with religious themes, you can see why all of this interests me. I’m grateful as always for the way that I not only learn things about a particular topic I am focused on researching, but many side avenues, when working on a project. The use of choral singing on Doctor Who seems to consistently coincide with some sort of religious or quasi-religious theme.

You can purchase the entire album of the season 11 soundtrack on Amazon.

July 20, 2020 Worship in Spirit and in Zoom
Recent Comments
0 | Leave a Comment
Browse Our Archives
get the latest from
Religion Prof: The Blog of James F. McGrath
Sign up for our newsletter
POPULAR AT PATHEOS Progressive Christian
1