Doctor Who: The Rings of Akhaten

The Doctor Who episode “The Rings of Akhaten” is surely one of the best in the show’s history for those interested in seeing Doctor Who explore religion. Spoilers ahead!

The episode begins with a charming scene (with the Doctor somewhat creepily spying on it) as a leaf blowing in the wind – yes, the leaf that was later “page 1” in Clara’s book – causes a man and woman to meet. Those two people will eventually become Clara’s parents. The Doctor, at both the beginning and the end of the episode, is trying to figure out what it is that makes Clara possible – a seemingly ordinary girl, and yet she lived and died in two different time periods and here she is alive again.

The very name of the previous episode – “The Bells of St. John” indicates that this mystery is the season’s story arc, rather like the flesh or the death of the Doctor or Bad Wolf have been in previous seasons. That episode was focused on the Great Intelligence and wi-fi, and yet the name of the episode is nothing to do with that, but instead focuses our attention on the mystery of Clara – and the additional mystery of who gave her the phone number for the Doctor’s TARDIS.

In “The Rings of Akhaten,” apart from at the beginning and end, the focus is in fact on the episode’s standalone story. Clara has trouble deciding where she wants to go, eventually saying “Somewhere awesome.” The Doctor takes her to the rings of Akhaten for the Festival of Offerings – and he mentions that he had been there once, a long time ago, with his granddaughter.

A religious component is introduced to the episode early on. Local people believe that a site in that system where a pyramid stands is the place where all life in the universe began. When Clara asks if that is true, the Doctor says “It’s what they believe. It’s a nice story.”

The psalm singers of Akhaten come into focus soon, and Mary, Queen of Years, a young girl who is the repository for her society’s history and stories. It is her job to sing to the old god and keep it asleep.

But it is the time for the old god to awaken.

The Doctor is very adamant about the deity – “It will feed on your soul, but that doesn’t make it a god. It’s a vampire.”

Since the entity feeds on the stories which comprise one’s soul – “we’re all stories in the end” – eventually the Doctor is willing to give the entity his memories to feed on, hoping that will be too much for it. In the process, he says that he was there for the universe’s beginning and its end, and that he guards secrets that must never be spoken. (There is an allusion to either the Celestial Toymaker or The Mind Robber when the Doctor says he’s been to a parallel universe where the laws of physics were controlled by a madman’s mind).

In a sense, the Doctor is portrayed as a true god, taking on a lesser being, a parasite, that some have mistakenly called “the only god.”

With the presence of a vampire and a mummy, there were echoes of ancient Egypt (and thus perhaps the popular myth of ancient gods as aliens?). And the name of the system, Akhaten, sounds a lot like Akhenaten, the pharaoh famous for seeking to introduce monotheism, the worship of one God alone – the sun!

In the end, what defeats the false god is not the Doctor as another god, however superior in certain respects. He could only feed the entity what has been. But Clara steps forward and offers the leaf, as a token of a life cut short too soon, and thus all the infinite possibilities of what might have been and could be. Infinity defeats the deity that isn’t truly ultimate.

The hints at the Doctor’s secrets bring us back to the era of the Seventh Doctor, when the Cartmel Master Plan, as it has been referred to, was focusing more attention on the mystery of who the Doctor is. Then as now, the challenge is to have some satisfying revelations and yet an ongoing mystery. We’ve all seen how that can be done well or poorly. Perhaps we will indeed get to hear the Doctor’s name – if so, I suspect that it will sound like “Doctor Who.” But the matter of why the Doctor’s identity needed to be such a secret can be spun out for much longer.

What did you think of “The Rings of Akhaten”? 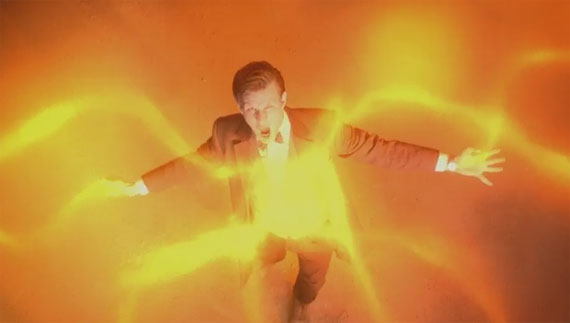 Take Up My Yoke
I've been thinking about a couple of sayings of Jesus and the...
view all Progressive Christian blogs
What Are Your Thoughts?leave a comment
Copyright 2008-2020, Patheos. All rights reserved.