I want to share a number of things connected with my course on Religion and Science Fiction that I am teaching this semester. First, I’ve been making videos to introduce certain topics, and I have made a few sci-fi opening credits sequences to precede them. As I mentioned recently, after I shared my initial versions of them on social media, a way was proposed to improve them dramatically (in both the literal and figurative senses of that word). If you’re a New Testament scholar, you surely know Jeffrey Gibson’s work on The Disciples’ Prayer (often called the Lord’s Prayer or Our Father but if you’ve read his work you’ll likely prefer his way of referring to it. If you’ve ever heard him read a paper at a conference, you’ll also know he has a wonderful voice. What you may not know is that he actually works as a voice actor. I hired him to provide the voiceover monologue for this and one other science fiction opening credits sequence for my class. Have a listen and you’ll undoubtedly want to employ him if you do anything similar. I’m tempted to hire him for the purpose of online teaching, to dub his voice in place of my own in all my lectures. That would be expensive, but my teaching evaluations would undoubtedly improve.

In addition, here is my provisional schedule of topics and readings. There will generally be at least one short story and/or at least one academic article to be read in connection with a given topic. Movies and television shows are listed in brackets where these are particularly relevant to a topic, but we will not watch those in their entirety in class although students are encouraged to do so and can earn points for doing so.

8/25: Introduction: Defining Religion and Science Fiction – What is science fiction? What is religion? Why study them together? Where do we start?

9/10: Marcus Broaddus, “The Voices of Martyrs”; Robert J. Sawyer, “Come All Ye Faithful”; Harrison, “The Streets of Ashkelon”; Murphy, “Jesus and Life on Mars”; Meynell, “Christ in the Universe”

9/29: Chapter 2 from Terminator and Philosophy; Arp, “If Droids Could Think.” [AI continued: Bicentennial Man; I, Robot]

10/6: Silverberg, “The Pope of the Chimps”; Ted Chiang, “Catching Crumbs from the Table”;  Juli Gittinger, “Dehumanization of the ‘Nonhuman’ Being” [TOPIC: Mythologizing Evolution; X-Men, Superheroes]

10/27: The Book of the Living; Star Trek and Sacred Ground chapters 11 and 13; Raven Leilani, “When I Left My Faith, I Went to ComicCon” [TOPICS: Fictional Religions like Earthseed and the God’s Gardeners; Scientology; Fandoms as quasi-religious identities]

11/3: Zelazny, “A Rose for Ecclesiastes”; Miller, “A Canticle for Leibowitz”  [TOPIC: Post-Apocalyptic]

11/5: Philip Jose Farmer, “Prometheus”; Payes, “In His Own Image” [TOPIC: Universalism and truth; Enemy Mine]

11/12: William Tenn, “On Venus Have We Got A Rabbi”; Phyllis Gotlieb, “Tauf Aleph” [TOPICS: Judaism; Superman]

There will also be a series of debates on selected topics where students argue the case for or against adopting a particular stance on a sci-fi issue.

9/8: Should religious freedom extend beyond Earth? Do religions have the right to proselytize through interstellar transmissions or missionary journeys?

9/22: Can an artificial intelligence be considered a member/adherent of a religion?

9/24: Can the three laws of robotics protect humanity from machines?

OR: Can a machine deserve “human” rights?

9/29: Can/should artificial intelligences be used to come up with arguments for the existence of God/the truthfulness of specific religions’ claims?

OR: Should the running of our world be handed over to an artificial intelligence, programmed to act in humanity’s best interest?

10/6: Mutants with superior intellectual, athletic, and other abilities are emerging as a result of evolution. Should special laws be enforced upon them, to protect humanity’s traditional form? Should they be rounded up and either eliminated, or studied so that we can unlock the secret behind their special abilities and share it with everyone?

OR: Should limits be placed on the rights of human beings to alter themselves through genetic manipulation and cyborg enhancements?

10/8: Might humanity’s gods be aliens? If this turned out to be true, what might the implications be?

OR: If we discover evidence of intelligent alien life, should it be covered up to avoid traumatizing humanity?

10/22: If pharmaceutical companies develop a drug or other treatment that can prolong human life indefinitely, should its sale and use be outlawed?

10/27: Should science fiction fans have their beliefs, pilgrimages, and right to wear costumes protected in the same way that (other) religions do?

10/29: A powerful otherworldly intelligence has contacted the UN and demanded our worship. Should we comply?

11/5: We have made contact with aliens who have nothing corresponding to human religious beliefs and practices. Should we cover this up?

11/12: Should terraforming of other worlds be allowed?

11/19: Should humanity pursue transferring our consciousnesses into machines as a way of ensuring our long-term survival?

Any suggestions for additions or substitutions? It isn’t too late to make changes, and I’ll be inviting students to make recommendations from things that they are familiar with as well. Nevertheless, it will remain the case that there is far more that is worth reading at the intersection of science fiction and religion than there is room for in a semester-long course. 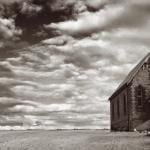 August 26, 2020 Spiritual Deserts
Recent Comments
0 | Leave a Comment
Browse Our Archives
get the latest from
Religion Prof: The Blog of James F. McGrath
Sign up for our newsletter
POPULAR AT PATHEOS Progressive Christian
1