Patheos Explore the world's faith through different perspectives on religion and spirituality! Patheos has the views of the prevalent religions and spiritualities of the world.
On the one hand, as I have said before, there is no slippery slope as traditionally conceived of by conservatives who warn of any departure from whatever they consider traditional and true.
One of the most common arguments used by “fundamentalists” (or whatever one may wish to call those who claim to accept the Bible as inerrant and that it is all to be accepted and believed) is that rejecting their view of the Bible puts one on a “slippery slope” down which one will inevitably slide to liberalism, unbelief, or whatever horrific things are said to lie at the slope’s bottom.
The biggest problem with this argument is that, when it comes to Biblical literalism, Biblical inerrancy (understood in any straightforward sense), and related viewpoints, there simply is no place one can actually stand at the top of the slope.
The Bible is a diverse and varied collection of writings. One can say that suffering comes upon those that deserve it, or that there is no direct connection between sin and suffering, and find support in the Bible. One can blame suffering only on the individuals who suffer or on the groups and communities to which they belong and find Biblical support.
And so the irony is that the only truly biblical viewpoint is one that recognizes the Bible’s diversity. If one claims the Bible is inerrant (which seems to assume that it has a unified teaching on the subjects it addresses) then one is already being unbiblical, and thus presumably already sliding down the slope.

And so when someone talks of the “slippery slope” it is perhaps best to remind them that the only place that is unsafe is in fact the “top” which is inhabited by self-proclaimed Biblical literalists and inerrantists who are doing dangerous exegetical and hermeneutical acrobatics to try to maintain a stable high ground that isn’t really there. That’s presumably why those who hold such views (as I once did) live in fear of the slippery slope. Unlike those who hike and ski safely upon the slopes, knowing the dangers and proceeding with knowledge and caution, the fundamentalist occupies an illusory peak while doing interpretative summersaults that are liable to cause landslides.

So there is indeed a danger – but for those who think they stand safely on the peak. The rest of us can go skiing and hiking and explore the mountain, and find places all over its slopes that one can remain if one chooses. That isn’t to say that the slopes can’t be slippery, just that there is no obligation to slide to or stay at the bottom, and no stable pinnacle that one can dwell on for any length of time.

I hope that most readers will understand that what I’m mainly offering is an affirmation that (metaphorical) skiing is fun, and I hope you’ll find the courage to join in and explore the slopes of our human existence!

On the other hand, as I thought about the image once again, it seems to me that the image as it is most commonly used is precisely backwards. Here’s why:

First, in my experience, changing your mind on one topic doesn’t automatically lead to a rethinking of other areas which logically ought to be affected by the change. Educators will tell you this. Pastors will tell you this. I think everyone knows it to be true in their own experience. It may be that those who are concerned to be logical and think things through will eventually realize the additional implications of changing their mind on the topic in question. But it is rarely automatic, much less a fast and direct path such as the downhill slippery slope metaphor suggests.

Second, even when education, reading, and/or thinking suggest that we need to change our minds about our cherished beliefs, we rarely do so willingly. Anyone who has had their assumptions challenged, whether in a university classroom or an informal conversation, will surely acknowledge that they did not immediately confess to having been wrong and undergo a complete revision of their thinking. We resist. We deny. We look for counter evidence and for arguments that will prevent the change. Sometimes, the mere fact that someone we respect continues to hold the view we wish to cling to will encourage us to do the same, even if we have amassed an incredible number of reasons and arguments that are pushing us to change our minds. Sometimes we say “I don’t see any logical reason why I should continue to think or believe this, but deep down, in my heart, I want to, and so I will.” That’s hardly a slippery slope. 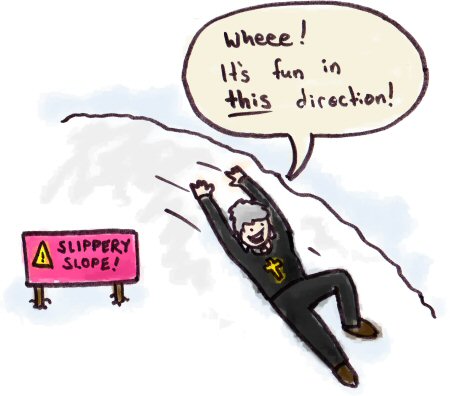 Or maybe it is, but one that leads uphill from our assumptions and upbringing rather than downhill. Perhaps education and learning are best likened to a climb up a slippery slope. The easier path of least resistance is to return to old habits of thinking and action, even after learning new and improved ways of doing things. Whether you are learning to play an instrument or studying the Bible, old habits re-emerge naturally, and it takes effort to improve our playing, our thinking, our understanding, or anything else. The slippery slope lies behind us, and learning is not something that puts us in danger of falling downhill, but allows us slowly and painfully to climb upwards.

And so I find myself less inclined now to ditch the problematic notion that exposing yourself to new and different ideas takes you down a dangerous slippery slope, and more inclined toreverse it. Exposing yourself to new information will potentially allow you to climb to higher ground and see further than you currently can. The slippery slope is a real danger, but the danger is that you will prefer to stay put and seek the security that seems to afford, or in spite of learning and growing will allow yourself to slip backwards down the slope.

The real danger is not that education will lead you to change your mind more than you had hoped. The real danger is that we are able to resist and avoid changing our minds, even when things that we have learned provide us with good reasons to do so.

And so let’s challenge those who think they are in danger of sliding down a slippery slope if they learn new things to join us in realizing that the slippery slope rises before them, and only by exposure to new information can we climb upwards and hope to see more clearly from higher ground.

Sliding down does have its pitfalls, but climbing up is by far the bigger challenge.

Right and Wrong about the Slippery Slope (Rachel Held Evans)

Slippery Slopes All Around

October 22, 2020 Announcing the Imminent Arrival of Metatron
Recent Comments
0 | Leave a Comment
"Brilliant perspective. It is not surprising that the fundamentalist political right-wing imports fundamentalist religious zeal ..."
robrecht Qx2: Comparing Anonymous Sources and their ..."
"Time to apply Occam's razor!"
Zeigler John Prove It
"As a foreigner looking at American politics, I'm bemused at how similar both sides are ..."
Harold Porter Prove It
"Thank you for pointing out that I hadn't finished that thought, or that something got ..."
James F. McGrath Warning Labels for Christianity?
Browse Our Archives
get the latest from
Religion Prof: The Blog of James F. McGrath
Sign up for our newsletter
POPULAR AT PATHEOS Progressive Christian
1