Reading the Bible while White

Biblical scholar Ekaputra Tupamahu has written an insightful article about whiteness in our field. I will have to take some time to grapple with the implications of specific things he says about the Synoptic problem. Here I want to focus on the broader subject of his article, the “stubborn invisibility of whiteness in biblical scholarship.” Esau McCauley’s Reading While Black has been getting a lot of much-deserved attention. I’ve been seeking to reflect on and incorporate the implications of these considerations into my teaching. I read while white, and most of my students do too, and doing so is full of privilege and pitfalls that are prone to go unnoticed in a way that reading while black, or a woman, or any other identity besides white male Christian is not afforded the luxury to.

Let me say from the outset that it has been delightful and fascinating, as well as profoundly refreshing, to find myself teaching my course on the Bible this semester after a long period in which I did not do so. While I did throw in readings from a very small number of straight white male authors, the preponderance of readings were authored by women, people of color, and others historically pushed to the margins of the academy and underrepresented in bibliographies as well as on conference panels.

Butler University has a new core curriculum requirement related to social justice and diversity. I have been planning to submit my course to be included among those that can mount towards the fulfillment of the requirement. Yet now as several times before I find myself in two minds about this. I am deeply concerned that even in the effort to increase diversity, we perpetuate marginalization and fail to interrogate existing norms. I taught my course with no fanfare about representation in the readings. They were simply examples of high quality academic sources. There is no reason the reading list cannot look like this in every course unless something is deeply amiss in a particular field. One thing that was delightful was that, as I emphasized inquiring about the consensus of experts if there is one, it was easier than ever before to make clear not only that experts in a field are not “unbiased,” but that those biases matter. It is possible to foster respect for expertise and at the same time draw attention to the fact that, when a discussion is dominated by a particular category of people who do not even recognize themselves as having an identity, such as English-speaking white males, we need to listen all the more closely and carefully to what those with other identities have to say about such topics.

One thing that jumps out at me as a thread running through the reception history of so much of the Bible is the distortion of meaning that occurs when texts by the oppressed become the scriptures of the powerful. Texts with a message of liberation from slavery are downplayed in favor of texts that safeguard that institution. The ironic labeling of the opponents of Jesus in the Gospel of John, a swipe at leaders of a local synagogue to which this group of Jesus-followers had belonged but from which they have been excluded, becomes in the hands of non-Jewish readers a basis for antisemitism. The critique of empire in Revelation, read by white conservative American Christians, becomes a bizarre end-times rapture theology that predicts their vindication. That last one is especially striking as we have witnessed how readily Evangelicals will declare allegiance and pay homage to a deceitful leader and trade core elements of the teaching of Jesus for access to the reigns of power. It also strikes me that the whole notion of the “rapture,” not found in the Bible, encapsulates the essence of privilege nicely: white middle class American Christians feel they can simply assume that when hardships confront the whole world, their treasure in heaven will ensure they are spared, just as their earthly treasure safeguards their comfort and distance from the hardships others face on earth.

What do you think? If a course like this is flagged as not merely “the Bible” but “the Bible through the lens of social justice and diversity” or something of that sort, does that risk perpetuating the marginalization of perspectives that should simply be part of any course on “the Bible”?

Let me share some links that are relevant to this topic. First, here’s a particularly clear example of white male theology at its worst:

‘God intended it as a disposable planet’: meet the US pastor preaching climate change denial

On demolishing strongholds: Approaching both wokeness and whiteness with weakness

Hope as the Will to Turn Things Upside Down

Privilege loss and the cross

Reflection: When the things of God and the Emperor conflict

Why do Christians protest?

Our masks have unmasked us

Christendom was not very Christian

Do We Want to be Made Well? The Sickness and Sin of Racism in America

A natural vision of justice amidst the pandemic

Religious naturalism, myriad nature, and justice: A reply to Kahn and Keller

Ira Einhorn and the politics of Jesus

The Power of Faith in Filipino Americans’ Fight for Justice

What do evangelicals and Nazis have in common?

From Widows to Warriors 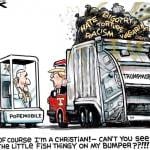