I know I’ve felt that dreams I’ve had in the past have conveyed other kinds of insights before. But I think a dream I had recently may be the first that I felt I learned something from about a contemporary ethical debate.

In the dream I was a person who owned a boat. In real life, I’ve never owned a boat and have rarely been on one. In the dream, someone approached me to transport something for them, essentially to smuggle something, and it was something that I considered it highly unethical to do.

I awoke with an awareness that the situation I was being put in was, from my subjective perspective, the same one confronted by those asked to bake a cake or make floral arrangements for a same-sex wedding.

Now, I know that from the perspective of most readers, as from my own, these things are not at all the same from a moral standpoint. But at the heart of it is a common question, the question of whether one should be able to refuse to provide a service because doing so would involve you in an activity that violates your own conscience.

Pretty much as soon as I awoke from the dream I realized that there were several solutions that helped address this:

I wrote this almost as soon as I awoke, and feel like I had more insight then than I can recover. Moments of insight, like dreams, can be fleeting.

If I had been asked what a dream might be like in which I was approached as a potential smuggler, I would have assumed that it would involve the Millennium Falcon. This dream was surprising to me in more ways than one.

Have you had a dream from which you awoke feeling as though you had caught a glimpse of something important? Did that impression stay with you? Thinking back a few days later, the dream and its insight would probably have faded entirely, had it not been for blogging…

Discrimination in the name of “Religious Freedom” 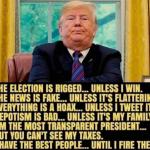 December 11, 2020 Believing Lies
Recent Comments
0 | Leave a Comment
"I thought the one of the points of the incarnation was that Jesus became fully ..."
Iain Lovejoy Divinity and the Learning Jesus
"More information than we have ever needed or wanted. None the wiser."
Matthew Christians and Internet Rumors
"None. Why do you ask?"
James F. McGrath Tampering with the Words of the ..."
"I'm not sure what led you to this bit of satire from almost 13 years ..."
James F. McGrath Obama Confesses To Being Hindu Muslim ..."
Browse Our Archives
get the latest from
Religion Prof: The Blog of James F. McGrath
Sign up for our newsletter
POPULAR AT PATHEOS Progressive Christian
1