“When celebrating the harvest, pour a libation to the Gods before you eat (Censorinus, De Die Natali 1.8-10).”

Any activity may be transformed into a ritual, and ritual can be transformative of your normal activities. It is simply a matter of putting your activities into a ritual context.  Upon waking we address our Lares, maybe by offering some incense and lighting a candle or lamp for them. Then we go about our usual morning routine, cleaning and dressing for the day, adding in affirmations. “May this water wash away impurities from my body, as the rain purifies the air.”

I include feeding wild birds as part of my daily morning routine, regardless of the weather, because birds are closely related with the Lares as messengers to the Gods. So they are fed before I eat. Afterward I will return to my lararium and consult the Lares, usually through a sortes virgiliane, where a copy of Virgil’s Aeneid is randomly opened and a passage read for the day’s meditation. I will next conclude with another offering of incense and a prayer of thanks before continuing my day. So my morning routine takes place during my morning ritual.

If I have chores in the kitchen to do, then first I light a fire for the sacellum of Vesta and offer incense and laurel. The Penates of the kitchen are called upon as well, to help in the chores, and after everything is done, a thanks-offering is given to conclude the ritual during which I had cleaned dishes, cooked, and cleaned up afterward. Everything was done in a ritual context.

Likewise out in the garden. There are rituals performed at every stage of the gardening process.  Each time the soil is turned, mounds are built, seeds planted, weeding, mulching, harvesting are performed, they begin and end with offerings in order to place these activities into a ritual context. Pliny even tells us of an example that when sowing rabbia, a ritual is begun and then the sowing proceeds while chanting, “I sow this rape seed for myself and my neighbors.”

A particular harvest festival, to which the law of Numa above seems to refer, is the Vinalia. A ceremony was held on 19 August for the Vinalia Rustica, which was performed by the flamen Dialis, the high priest of Jupiter. Veiled under his toga, he would begin the normal sacrificial rituals. A usual order is to offer incense first to provide a pleasing scent, then the offering of cakes made from flour and cheese, followed by a libation. Thus, in saying that one should “pour a libation for the Gods” it is implied that other offerings preceded the libation.  Such oblations are always offered before the main sacrifice of a ritual. In the middle of the main sacrifice, the flamen would harvest the first bunch of grapes, taking the choicest bunch as an offering to Jupiter in thanks for the harvest, and also with a promise to offer more when the new wine would next be celebrated (Varr. L. L. 6.16).  A similar ritual was then held on 23 April for the Vinalia Priora, when flasks of the new wine, aged for six months, were opened and tasted by the flamen Dialis for the auspicious occasion, before he poured a libation of the vinum novum for Jupiter.

Today the Vinalia provides us with a model.  Whether engaged in business, athletics, artistic pursuits or menial chores, there is a Goddess or a God readily called upon to lend us assistance.  It is only a matter of placing our activity into a ritual context to become imbued by the power and presence of a God or Goddess, so that we may perform our tasks better and more carefully with Their help. Doing things this way is also a reminder to us that the Gods are ever present with us, that we should speak and act in conscious awareness of Their benign presence, and thus that we ought to live accordingly in a pious, ethical and reverent way of the Gods. 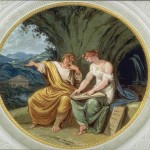 June 12, 2013 An Ecstatic and Formal Side to Roman Traditions
Recent Comments
0 | Leave a Comment
""My 'battle' is often with atheists - pagan atheists - who revere nature and argue ..."
Thisica Beliefs: That the Gods of Ancient ..."
"the bottom line is reality, one may have ones own moral consience of how important ..."
jeff Discussing Sacrifice in the Bhagavad-Gita
""In some rituals the numen of a Goddess may instill a sensation of serene security."Do ..."
Guest An Ecstatic and Formal Side to ..."
"Thank you for sharing with us, Piscinus."
Crystal Clary Annis Morning Prayers
Browse Our Archives
get the latest from
Pagan
Sign up for our newsletter
POPULAR AT PATHEOS Pagan
1

It's All Fun and Games Until...
Fivefold Law
Related posts from Religio et Pietas