Religion vs Genetics: The Battle Between Two Truths

Religion vs Genetics: The Battle Between Two Truths January 6, 2018 Bruce A Robinson

The conflict between genetics and religion is a never-ending debate. 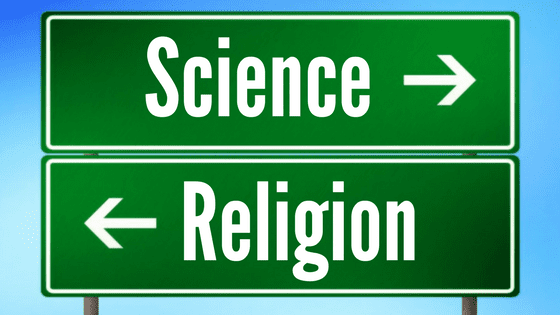 A Google search for the three words: conflict, science, and religion returned about 95.5 million results in late 2017!

The conflicts between science and religion appear to be a prominent and enduring debate. A Google search for the three words: conflict, science, and religion returned about 95.5 million results in early 2018!

Conflicts are to be expected because science and religion have two very different concepts of truth. Religious truth is typically derived from people’s interpretation of English translations of ancient texts like the Hebrew and Christian scriptures (a.k.a. Old and New Testament) in the Bible. These are often believed to be inspired by God, and inerrant — without error.

On the other hand, the scientific truth starts with a person being curious about something in nature. They formulate a concept that might explain their observations. They and other scientists then conduct wide-ranging tests to see if the concept corresponds with reality. Over time, those concepts that work out are called theories. In science, the word “theory” refers to a belief that is well proven to be accurate.

Unfortunately, in casual use, the word often means a guess.

Genetics is one of many fields of scientific study, surprisingly, among the most serious conflicts between science and religion over the past 15 decades have been five that directly or indirectly involved genetics. They are slavery, the origin of the species, gender, homosexuality, and, most recently, transgender persons:

During the mid-19th century, the most important religious/ethical conflict in the U.S. involved the morality of human slavery and whether people owning other people should be eliminated.

The Bible treats slavery as a normal part of everyday life. Genesis 9 discusses a curse that Noah laid on his son Ham. Noah was motivated by to some unspecified sexual indiscretion initiated by Ham with Noah in his tent. The curse involved the perpetual slavery of Ham’s sons, grandsons, and further descendants.

Today, to transfer guilt and punishment from a guilty person, like Ham, to innocent descendants is almost universally considered to be immoral. However, the Bible has many instances where sin and punishment were transferred from the guilty to the innocent.

For no obvious reason, in modern times, the descendants of Ham were assumed to be blacks in Africa. Slaves were once considered to be equivalent to 3/5 of a person in the U.S., at least when the number of seats in the federal House of Representatives was computed for each state.

Many Christian clergies once taught that when God created the universe, he placed different races of people in different locations in the world: blacks in Africa, whites in Northern Europe, etc. The belief was that God wanted the races to remain separate. Further, they were not to intermarry. Thus, after slavery was abolished in the U.S., racial segregation was tightly enforced in the U.S. for many decades. Remnants of this racial discrimination remain today.

The science of genetics tells us that the genetic differences in the DNA of humans of different races are minuscule. Skin color is caused by the presence of melanin which is controlled by only six genes out of a total of perhaps 20,000 genes in a typical human’s DNA. Thus to enslave or discriminate against persons of a specific race makes little or no sense to a person knowledgeable in genetics.

So, genetics — a very small part of science — was and remains at the basis of a major conflict in U.S. history, and continues to motivate racism today.

Origin of the Species and the Theory of Evolution

The two creation stories in the Bible’s book of Genesis discuss how God created different “kinds” of animals during a short interval circa 4004 BCE.

In 1859, Charles Darwin published the book: “On the Origin of Species by Means of Natural Selection.” He discussed his theory of evolution and its cause as well as the driving force behind evolution as occasional, minute, accidental, random, and beneficial changes in an animal’s DNA which gave it a greater likelihood of generating more offspring. Eventually, through many such positive changes over a long time interval, a new animal species might evolve.

Darwin’s book and theory triggered a major genetics-based conflict between science and religion which is still being fought today.

Many religious conservatives accept the belief that such changes in DNA can occur but believe that they are never sufficient to generate a new species. Others believe that the theory is complete without merit.

Again, genetics is at the core of a major conflict between science and religion.

Women were heavily discriminated against in biblical times. In the U.S., this bias has continued in gradually lessening amounts to the present day. It was only during 1920 that the 19th Amendment to the U.S. Constitution was ratified and women were allowed to vote.

Genetics tells us that a person’s biological sex is defined by the presence or absence of a “Y” sex chromosome among the 46 chromosomes in human DNA. This again is a tiny percentage of the total and speaks to the equal worth of females and males. Assigning different fundamental human rights to men and women again makes little or no sense to a person knowledgeable in genetics.

So, genetics strikes again as a minor field of study in science that causes a major and continuing conflict between science and religion.

The Bible has historically been interpreted as condemning all same-gender sexual activity as a perversion worthy of the most severe punishments, including spending all eternity in the torture chambers of Hell after death. This belief is still widespread, particularly among fundamentalist Christians, other evangelicals, and other religious conservatives.

Prejudice against homosexuals has been dropping for decades. This has accelerated since mid-2015 when the U.S. Supreme Court legalized same-sex marriages (a.k.a. gay marriages) throughout the country.

The concept of heterosexual, homosexual and bisexual orientations was first proposed by a German writer, Karl Ulrichs in 1862. After studying the results of research into the nature of sexual orientation during the 1950’s, the American Psychiatric Association declared in 1973 that homosexual orientation is a normal human sexual variant, and was not a form of mental illness.

A decades-long search for one or more genes in human DNA that cause homosexual orientation was not particularly successful.

Recently, the cause of homosexual orientation has been found to be epigenetic, not genetic. The term “epigenetic” refers to a layer on top of DNA that controls how genes are turned off or on.

Again, only a few epigenetic components appear responsible for determining a person’s orientation. A saliva test has been developed that predicts the sexual orientation of males with an accuracy of 83%.

About 0.6% of the adult population is transgender. That is, the gender with which they currently identify is different from the sex with which they were identified as newborns. The remaining 99.4% of humans are cisgender: their current gender identity matches their birth-identified sex.

Since gay marriages were legalized across the U.S., many conservative groups who were attacking persons with a homosexual or bisexual orientation switched their focus to oppose equal rights for transgender individuals.

People have searched the Bible for references to transgender individuals. The number of passages found has varied from 0 to 100! (See references 1 and 2).

The root cause of discrimination against transgender persons is related to the definition of a person’s gender.

Many liberals follow an adult’s stated gender identity whereas many conservatives base gender solely on the design of a person’s primary sexual organs.

The precise cause of being transgender is not known. However, many transgender persons describe themselves as having a female brain trapped in a male body or vice versa.

It appears that this statement is literally true. Researchers have shown that transgender females who were identified as males at birth have female structures in their brain. and vice-versa. Again, genetics and/or epigenetics are probably involved. If this is correct, then again assigning different rights to transgender and cisgender persons will make little or no sense to a person knowledgeable in genetics.

Again, genetics may be the root cause of a major religion-science conflict.

Many of the major inter-personal conflicts and forms of discrimination in the U.S. and other nations are rooted in a conflict between religion and one narrow field within science: genetics. In all cases, discrimination has lessened over time and equal human rights have either been attained by minorities or are headed in that direction.

Cruz E. 2016. The Washington Post. Where in the Bible does it say you can’t be transgender? Nowhere.

January 8, 2018 Refugees: The Bible vs. The United States vs. Canada
Recent Comments
2 Comments | Leave a Comment
Browse Our Archives
get the latest from
Best of Patheos
Sign up for our newsletter
POPULAR AT PATHEOS More Voices
1