The 2021 NCAA March Madness Basketball Bubble – But how will students complete course work? Question not even asked

If you needed any further evidence that the ends of big-time college athletics (to establish branding and rake in money) are oftentimes at cross-purposes with the mission of higher education, look no further than the NCAA’s plan to emulate the NBA’s playoff bubble for its Division I championship tournament (otherwise known as “March Madness”).  From the NCAA’s own website:

In recent weeks, the Division I Men’s Basketball Committee has engaged in a thorough contingency planning process to determine the most effective way to conduct a safe and healthy March Madness for all participants for the 2021 championship. Through these discussions, it became apparent to the committee that conducting the championship at 13

preliminary round sites spread throughout the country would be very difficult to execute in the current pandemic environment. The committee has decided the championship should be held in a single geographic area to enhance the safety and well-being of the event.

As a result, NCAA staff are in preliminary talks with the State of Indiana and the city of Indianapolis to potentially host the 68-team tournament around the metropolitan area during the coordinated dates in March and April.  Indianapolis was already slated to host the Men’s Final Four from April 3-5, 2021.

The men’s basketball team at Baylor, where I proudly serve on its faculty, is predicted to go deep into the tournament.  The USA Today’s pre-season poll ranks the Baylor Bears #1.  And if the NCAA does the same for women’s basketball, the Lady Bears, ranked #4 in the Sports Illustrated pre-season poll, will likely find themselves playing for as long as the men.  Given the time for travel to and from the tournament’s location and as well as the time spent there, an NBA-like “bubble tournament” could mean for both teams nearly 4 weeks away from campus.  Yet none of the stories I have read online–including the one posted on the NCAA’s website–addresses how the NCAA (not to mention any of its member institutions) is going to remedy this radical breach in the student-athlete’s academic life right smack dab in the middle of the Spring semester.  The fact that the question does not even arise in the NCAA’s official statement is probably good reason to believe that it never occurred to anyone in leadership there.

Update:  Just noticed that the top three teams in USA Today‘s pre-season men’s basketball poll are schools that identify as Christian: Baylor (Baptist), Gonzaga (Catholic), and Villanova (Catholic).  The Final Four is scheduled April 3-5, 2021, which, on the Christian calendar, are Holy Saturday, Easter Sunday, and Easter Monday.  Suppose all three of those teams make it to the Final Four.  Should they play during that weekend?  Let’s ask Sandy Koufax.

November 29, 2020 How Google Makes Us Stupid: The Tyranny of Presentism
Recent Comments
0 | Leave a Comment
Browse Our Archives
get the latest from
Return to Rome
Sign up for our newsletter
POPULAR AT PATHEOS Catholic
1 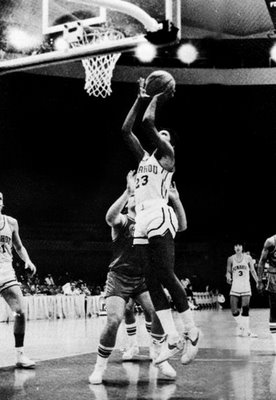 Catholic
Me v. Obama Shooting the Basketball? No Contest,...
Return to Rome

Catholic
New article in Religions: "Catholicism and the Natural...
Return to Rome
TRENDING AT PATHEOS Catholic