“Reformation Day and Schism” is an essay I published 10 years ago in The Catholic Thing.   I argue in it that Western Christians should no more celebrate Reformation Day than one should celebrate one’s marital divorce.  What follows is the essay in its entirety.

Sunday, October 31, is Reformation Day. It marks 493  years [503 in 2020] since Martin Luther nailed his 95 theses to that famous door in Wittenberg, Germany.  The Augustinian monk set in motion a sequence of events that reverberated through Western Christendom and continues to mark and separate us today.

Since returning to the Catholic Church in late April 2007,  Reformation Day has taken on a different meaning than it did when I stood on the other side of the Tiber. Nevertheless, even as a Protestant, my enthusiasm for October 31 never rose higher than modest appreciation for what I thought were Luther’s, and later Calvin’s, significant contributions in helping Western Christians to retrieve what had been lost. I say “modest appreciation,” since it always seemed to me rather unseemly to get too excited about schism and mutual 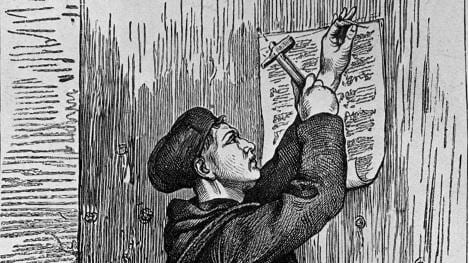 charges of apostasy and heresy.   It would be like celebrating the 10th anniversary of your divorce.  You may think that the divorce was a good idea, but not because you think divorce itself is the proper end of a marriage.

Luther himself, though excommunicated by the Catholic Church, never saw his movement as anything more than a renewal movement within the Church.  We, of course, know now that the movement he started had a life of its own, resulting in scores of different and often conflicting understandings of Scripture, sacrament, and Church, and each finding something of Christianity’s traditions to challenge.

But in order to arrive at this present state of theological diversity and ecclesial fragmentation, you needed more Luthers, of which there has been an endless supply.  His success made Luther a towering example to emulate.  Combine that with an ever diminishing memory of a unified Western Christianity, along with the spirit of the Enlightenment—that detachment from familial, ecclesial, and cultural traditions is the beginning of reason—and schism then becomes a sort of secular sacrament. Although Luther argued that justification is by “faith alone,” it is clear that he did not anticipate or support the modern idea that Church is by “the faithful alone.”

It is not surprising, then, why it is sometimes difficult for both Protestants and Catholics to think of ecclesial unity as the proper state of Christ’s Church. Because we are modern people, we tend to think of the Church as a collection of individual choosers, each with his own autonomy that may not legitimately be subject to something outside itself without good reason. That is, we assume that the burden of proving the necessity of ecclesial unity is not on the individual believer, but rather on the corporate entity that demands his allegiance. The Church, in that sense, becomes the enemy of faith, an unwelcome intruder into the believer’s pious solitude. For the modern mind, it would be like the commodity choosing the buyer, since religion, like sex and commerce, is just another act between consenting adults, which by implication makes the authority of creeds the doctrinal equivalent of annoying chaperones.

Ironically, this sort of mindset, which sees schism as proper and unity as unnatural, is one of the conceptual catalysts that helped lead me back to the Catholic Church. For I began to see that the whole idea of theology as something that is  mine to choose – like a pair of slacks that I can have tailored for my own specifications – was precisely the problem. As long as “Church” was something that was under me rather than me under it, I was doomed to a life of ecclesiastical promiscuity despite my best efforts to practice safe sects.

Once I had become convinced that Catholicism, and the Catholic doctrines that Protestants often reject (e.g., apostolic succession, infusion of grace, Eucharistic realism, and so forth), were legitimate understandings widely and uncontroversially held in the Christian world until the time of the Reformation, Catholicism became to me, for the first time since I was a youngster, a “live option,” as William James would have put it. But not only that, it was an option that I could not ignore, for it was both forced and momentous (to cite James again). That is, I had to make a decision – Protestantism or Catholicism – and I could not not choose. And whichever I chose, the decision would change the trajectory of my life. Thus, it was momentous.  I had to either walk into, or away from, the Confessional. There was not, and could not be, a third option. For this reason, it did not seem anymore that I was choosing a church; it seemed now that the Church was choosing me.

It was a book review by a Protestant professor, Carl Trueman of Westminster Theological Seminary, that crystallized this for me:

Every year I tell my Reformation history class that Roman Catholicism is, at least in the West, the default position. Rome has a better claim to historical continuity and institutional unity than any Protestant denomination, let alone the strange hybrid that is evangelicalism; in the light of these facts, therefore, we need good, solid reasons for not being Catholic; not being a Catholic should, in others words, be a positive act of will and commitment, something we need to get out of bed determined to do each and every day. It would seem, however, that . . . many who call themselves evangelical really lack any good reason for such an act of will; and the obvious conclusion, therefore, should be that they do the decent thing and rejoin the Roman Catholic Church.

I knew then that the burden was on me, and not on the Church, to show why I should remain in schism with the Catholic Communion in which my parents baptized me. I could think of no incorrigible reason to continue as a Protestant. And then I knelt; I could do no other.

About Francis J. Beckwith
You can read more about the author here.
Previous Post

November 18, 2020 The 2021 NCAA March Madness Basketball Bubble - But how will students complete course work? Question not even asked
Recent Comments
0 | Leave a Comment
Browse Our Archives
get the latest from
Return to Rome
Sign up for our newsletter
POPULAR AT PATHEOS Catholic
1