Christianity Should Not Be Cruel

Christianity Should Not Be Cruel July 4, 2019 blog admin 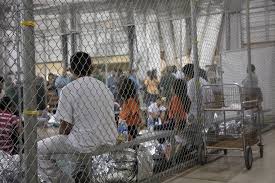 As a professor, I have had students debate with one another whether or not Christianity contributes to racial inequality or racist practice. Last fall, one student argued faithfully and fervently that St. Thomas Aquinas would have objected to the Holocaust while another student pointed to Aquinas’s just war theory and argued that perhaps Christianity is quite a vessel for violence. I struggle with what faith might mean in contemporary environments and political situations. As I read about the Trump administration denying children soap and toothbrushes at the Southern border and forcing families to sleep on concrete, I am increasingly concerned that the cynicism of the latter student with regard to Christianity is well-founded. The United States is arguing that people coming from countries with political strife that we contributed to by supporting genocidal dictators like José Rios Montt not only do not deserve our help but that they deserve to be treated as less than human. Child Protective Services would take children away from parents if they were treated the way they are in our detention centers cum concentration camps. This not new. I have heard the calls of these children in my ears over the last year.  These children reminded me of Jesus crying out on the cross, “Eloi, eloi, lama sabachthani!” Which translates, “My God, My God why have thou forsaken me!” It was the moment in which the living son of God became most human and provided a path to salvation for humanity. Jesus was quoting Psalms 22. I imagine what it might mean for children with no toothbrushes, soap, and sleeping on concrete floors to feel as if they’ve been abandoned when in reality they’ve been wrongfully separated from their parents and treated like they were less than human.

Oddly, it seems that the people most in favor of these policies consider themselves Christians.  Finding Christians who argue that white people are victims of immigration and Christianity calls for border enforcement is not difficult. Faith as a warrant for cruelty seems part of Making America Great Again, and that is worrisome.

What do we do when Christianity and cruelty become one and the same? Last October I read a piece by Adam Serwer in The Atlantic titled, “The Cruelty is the Point.” Serwer argued that some of the more abusive portions of the Trump Administration’s rhetoric and policy are predicated on the indulgence of cruelty and punishment on the part of Trump supporters with regard to issues that primarily affect minorities, be they immigrants, LBTQIA+ folks, communities of color, religious minorities, or other folks who are not white heterosexual Christians. The last identity group, Christians, concerns me in a particular way. The Christianity component is worrisome because one might hope that Christianity serves as a check on some of the more basic and power craven aspects of white patriarchy. Cruelty and white nationalism seem especially troubling among Christian supporters of Donald Trump. Sadly, we’ve done this before. President Eisenhower ran Operation Wetback. That supposed work and deportation program only stopped after a bus crash where undocumented workers could not be identified as a result of policies that only numbered workers rather than naming them became too morally reprehensible to continue. We know the result of carelessly separating families and recklessly moving them about. We know the darkest periods in American history are tied to the same suspicions and bigotry that animate the current political environment.

Somehow, despite bragging about sexual assault, maligning Latinx people as rapist, murders, and drug dealers in his announcement speech, the Charlottesville response, and a tiring litany of racist remarks, misogynist remarks, homophobic remarks, Islamophobic remarks, and a devil may care attitude toward civility that Christians generally expect from the bully pulpit, Trump hovers at near the same approval rating among Republicans that he enjoyed at the beginning of his presidency. That approval rating, above 80%, is very high for a person who makes many mistakes that might trouble or end other presidencies. Many who support Trump seem to do so precisely because they identify as Christian. The link between Trump and Christianity is difficult to process in light of policies designed to specifically make children sleep on concrete floors and go without basic hygienic supplies.

Draconian enforcement of immigration policies is designed in a way that unnecessarily separate families; this administration does not keep count of the families and the children being torn apart and does not think about how they might be reunited. We do not actually know the number of separations given that the only current focus is on parent-child separations and there are many other family pairings and groupings seeking relief in our country. Even where federal judges have provided injunctions, the administration continued to separate families and to withhold basic communication between parents and children for over a month.  More facilities are being constructed to hold immigrants seeking asylum in tent cities. Family separations are intended to be cruel and where the intention might have been absent incompetence finished the job. Where the administration has argued that immigration enforcement is a procedural matter and even invoked Romans 13, Trump and those working for him seem reticent or recalcitrant when considering immigration a moral issue. Memos show that the separations were designed to be cruel as to provide a deterrent to those seeking asylum. This is meant to be abusive. This is functionally cruel. I don’t remember the verse exhorting Christians to be cruel in giving unto Caesar. In fact, the best examples of American Christianity tend toward Dr. King’s explanation that an unjust law is no law at all.

Kids are dying and pregnant women are among those suffering. Is this any of this necessary? Is it really necessary for a supposedly Christian president? When faith leaders laid hands on Trump and blessed him, did they envision black and brown children dying in cages? This immigration policy is more severe than the Obama administration’s mass deportation efforts that earned him the deporter-in-chief moniker. In other words, Obama’s already questionable immigration policies lead to the deportation of black and brown people sometimes into very dangerous places to which they have little or no connection are being leveraged into something that intends cruelty and punishment as its end. We’re missing something from the Emma Lazarus poem when we tell people they are not welcome and that we don’t care if they are in danger if they cannot come to America.

The cruelty is not limited to the Southern border. The recently passed Alabama, Louisiana, and Ohio abortion laws are not restrictive, they are punitive. They punish women. Women who don’t know if they can take care of another person on their own. Women who have survived incest. Women who have survived rape. Women who might have to carry a stillborn or nonviable fetus to term. Purging trans people from the military is about punishment, not about policy that helps the military. The cruelty is the point.

The treatment of children at the border is part of a broader systemic push to be mean. This isn’t about Christianity. It’s about cruelty. It’s about controlling the bodies of people of color at an imaginary line because people are worried about diluting white cultural dominance. It’s about purity myths and men enforcing them to detriment of women and people of color. It’s shameful…  If you’re a Christian, you might be called to do better.

Sam Perry is an associate professor at Baylor University in the Baylor Interdisciplinary Core. He lives in Waco, TX.

July 16, 2019 Tyler Perry and the Rhetoric of Madea
Recent Comments
0 | Leave a Comment
Browse Our Archives
get the latest from
Rhetoric Race and Religion
Sign up for our newsletter
POPULAR AT PATHEOS Progressive Christian
1