WHAT IS THE VENGEANCE OF THE LORD?

WHAT IS THE VENGEANCE OF THE LORD? August 7, 2019 Richard Murray

“Beloved, never avenge yourselves, but leave it to the wrath of God, for it is written, Vengeance is mine, I will repay, says the Lord. To the contrary, if your enemy is hungry, feed him; if he is thirsty, give him something to drink; for by so doing you will heap burning coals on his head. Do not be overcome by evil, but overcome evil with good.” Romans 12:19-21.

Here is the twist. The purpose of the passage is NOT about threatening ourselves and others with destructive wrath, which is the way the first verse quoted above is mainly used today. Rather, the passage exhorts us to forsake “destructive wrath” in favor of the Father’s “restorative wrath.”

I propose that God’s “restorative wrath” and His “restorative love” are one in the same. The DAY OF JUBILEE and the DAY OF VENGEANCE are the same thing. God’s “day of vengeance” IS His “day of restoration.”

Isaiah 61 describes the Lord’s “restorative wrath.” Where is the widespread and worldwide melting and mauling of the wicked millions here?  Rather, does not THIS “day of vengeance” sound exactly like the “restorative love” of Jubilee?

“The Spirit of the Lord GOD is upon me, because the LORD has anointed me to bring good news to the poor; he has sent me to bind up the brokenhearted, to proclaim liberty to the captives, and the opening of the prison to those who are bound; to proclaim the year of the LORD’s favor, and the day of vengeance of our God; to comfort all who mourn; to grant to those who mourn in Zion- to give them a beautiful headdress instead of ashes, the oil of gladness instead of mourning, the garment of praise instead of a faint spirit; that they may be called oaks of righteousness, the planting of the LORD, that he may be glorified.” Isaiah 61:1-3.

There is no violence described above, only full restoration. Loving well IS the best revenge! When Jesus declared that He Himself was the fulfillment of Isaiah 61, He actually omitted the words “day of vengeance” from His recitation. Perhaps He knew how that word can be twisted by wrath-mongers and didn’t want it corrupting His mission statement.

“The Spirit of the Lord is upon me, because he has anointed me to proclaim good news to the poor. He has sent me to proclaim liberty to the captives and recovering of sight to the blind, to set at liberty those who are oppressed,

Sounds good to me!

But could this be true? Is this dynamic elsewhere stated clearly by Jesus? Oh yes!

This was Jesus’ central message in the sermon on the mount.

“You have heard that it was said, ‘An eye for an eye and a tooth for a tooth.’

But I say to you, Do not resist the one who is evil. But if anyone slaps you on the right cheek, turn to him the other also. And if anyone would sue you and take your tunic, let him have your cloak as well. And if anyone forces you to go one mile, go with him two miles. Give to the one who begs from you, and do not refuse the one who would borrow from you. “You have heard that it was said, ‘You shall love your neighbor and hate your enemy.’ But I say to you, Love your enemies and pray for those who persecute you, so that you may be sons of your Father who is in heaven. For he makes his sun rise on the evil and on the good, and sends rain on the just and on the unjust. For if you love those who love you, what reward do you have? Do not even the tax collectors do the same? And if you greet only your brothers, what more are you doing than others? Do not even the Gentiles do the same? YOU THEREFORE be perfect, as your heavenly Father is perfect.” Matthew 5:38-48.

The last verse is key. It instructs us to “THEREFORE” be “PERFECT, even AS the Father is perfect.” The “therefore” refers to the previous ten verses in which the Father’s perfection is explained. His perfection lies in this– He loves, blesses, forgives and restores His enemies!

Am I saying that “the coals of conviction” heaped on the enemies’ heads isn’t painful? No, coals on the head hurt and I think nothing is more painful than seeing the gravity of our own self-centered evil. Am I saying that God’s purging flames don’t singe, sting, sear and scorch? No, God’s fire is white hot and white holy. But, what I am saying though is that His fire ultimately saves us by overcoming all of our evil with all of His good. The church father Origen called God’s judging flames “wise fire” because they ultimately heal rather than harm. 1 Corinthians 3:13-15.

The Gospels reveal a God who never punishes to gratify Himself, but rather punishes to heal and help the evildoers improve and be restored. William Barclay,  who was professor of Divinity and Biblical Criticism at Glasgow University and the author of many Christian commentaries and books, including a translation of the New Testament and the very popular Daily Study Bible Series, traces the word “kolasis” back, through Plato, to an original term used to describe the pruning of trees back to allow fuller and healthier growth. Revenge motives are “timoria,” and only gratify the lust for an eye for an eye payback. But “kolasis” motives are always looking for a way to restore and repair that which is lost and broken.

Patristic Universalism believes Jesus will win all people back, come Hell or high-water. God, through Jesus Christ, will ultimately rescue and convince ALL to receive their rebirth, even if it is after (in some cases) much “gnashing of teeth,” prolonged emotional anguish, and stubborn mental resistance. Many will hold out for extended periods of time, but all will eventually see that against an irresistibly virtuous God there is no eternal defense. As the lies are burned away, every soul will come to itself and behold this champion truth– Jesus Christ is God’s rescuing love.

In his Commentary on Matthew 10.2, Origen, my favorite early church father, explained the “the weeping and gnashing of teeth” of those in fiery judgment as a form of repentance and sort of anger of the sinners against themselves, while in the furnace they are being purified. The Lord is the great physician with His motive for His surgical punishments always being restorative “kolasis.” God’s modus operandi is always to overcome evil with good. Loving well is the best revenge!

Even the Lord’s punishments are healing. His vengeance is His curative virtue. That IS good news! 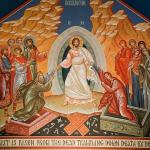 August 9, 2019 ALL IN
Recent Comments
0 | Leave a Comment
Browse Our Archives
get the latest from
Richard Murray
Sign up for our newsletter
POPULAR AT PATHEOS Progressive Christian
1