Get updates from Robert Ricciardelli delivered straight to your inbox

How Bible Reading can be Bad for your Spiritual Health by Richard Dahlstrom April 3, 2013 editorconvergingzone 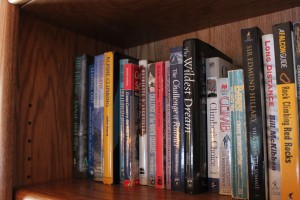 Reading about mountains is different than climbing them

Some of the most important truths in the Bible are found in obscure passages that never made the highlight reel of miracles, crosses, virgin births, and empty tombs.  Tucked away, for example, between Jesus healing of a sick man by a fountain, and his feeding multiple thousands with a few loaves of bread, I found one the most powerful, and least talked about statements Jesus ever made.  His miracles created quite a stir among people who had a stake in the religious status quo, and as a result, things are heating up between Jesus and these religious elites.  It’s in that context that Jesus says these few little words to them:

“You search the scriptures because you think that in them you have a eternal life; it is these that testify about Me; and you are unwilling to come to me so that you may have life.”

In this information age, is it possible to confuse knowing facts and verses and stories and doctrines about Jesus, for actually knowing and following Jesus in our daily lives?  Perhaps.

We give children awards for memorizing Bible verses, and run the risk of teaching them that the point of the Christian life is to learn the text.

We teach people to memorize creeds, which are declarative statements about Jesus, implying that mental assent to these creeds is tantamount to belief.

We preach the Bible, study the Bible, defend the Bible, learn the Bible in colleges and seminaries, and tell people to read their Bibles every day.  We even go so far, sometimes, as to imply that this is the fundamental ingredient for living well.

This is understandable in a culture where intellect is highly valued.  People who read blogs like this one are usually well educated, and it’s no surprise that such people cherish education, study, information gathering.  It may come as a surprise, though, to hear Jesus tell us that winning Bible Jeopardy isn’t the point of the Christian life – not even remotely.  Our collection of facts may actually work against us over time, as we begin to take pride in what we know, and equate making Bible knowledge deposits in our fact bank our criteria for maturity.

When this kind of knowledge becomes our paradigm and preoccupation, we’re cooked.  O, we might perpetuate an air of wisdom and maturity for a season, perhaps even years.  Someday though, the game will be up and we’ll be exposed, hopefully to ourselves, but at the very least to those who watch us and see so very clearly the vast disconnect between our religion and Jesus.

They’ll wonder how a religion who’s founder said, “Love your neighbor as yourself” became obsessed with gun ownership, or worse, slave ownership.  They’ll wonder how a religion whose found said “freely you have received, freely give” would have African natives saying to missionaries, “you told us to close our eyes and pray, and when we opened them you took our land”; or how it’s possible for an entire movement to obsess so much about virginity and have so many of its main leaders indicted for sexual abuse and scandals.

How can we change all this?

We need to rethink the purpose of the Bible.  As a slight mountaineer, I have dozens of mountaineering books, maps, and guidebooks.  I can talk you through some of the most challenging routes on the North face of the Eiger, and tell you about the challenges of climbing the Hillary Step near the summit of Mt. Everest.  Just don’t ask me to go there, because if I did, you’d know, as I fell to my death, that I’d read way more about climbing than I’d actually climbed.  I have friends, on the other hand, who don’t have “mountaineering libraries”.  They have real stories, from actual time spent in the mountains.  They’ve learned the theory by getting out of their chairs and living.

They’re the mountaineering version of the Bible’s soldiers, prostitutes, tax-collectors, and other outliers who, in spite of their appalling failure to know their Bibles, sought Jesus and then followed him with such passion that they began to look like him, as they loved deeply, gave their stuff away, and demonstrated great faith.  All the while, the folks who knew their Bibles best were busy marginalizing these people and resisting Jesus.  It’s as if the people with all the gear and guide books not only refused to get of their cars – they actually tried to hinder everyone else from climbing as well.  The map readers and defenders, became enemies of real climbing.

We need to get our heads out of our books and start living.  Jesus criteria for a well lived life has little do with how much we read about it him.  It has everything do with how well we made his character visible in our daily living.  Did we serve other people?  Live generously?  Cross social divides?  Embody joy and hope in our interactions with others?  Use our spiritual gifts?  Lay down our lives?

“No, but we read about those things.   Blogged.  Studied.  Debated.  Defended.  We know maps!”

Here’s Jesus response:  “I don’t care.  Put your books and maps down and follow me.  Throw a party.  Bless a neighbor.  Give some money away – lots of it.  Plant 30 trees in Jesus name.  Visit someone on stuck on the margins.  For God’s sake, DO IT!”   These are the ones who have read their maps and responded by getting out and taking the trip and in the end, it’s the journey, not knowing the map, that constitutes maturity.

How can we help people value the Bible properly so that it encourages a living faith, rather than simply mental stimulation?

April 6, 2013 Loosen your Grip and Soften your Heart by Robert Ricciardelli
Recent Comments
0 | Leave a Comment
"I am truly beyond blessed. Thank you for sharing this. God blessbuy instagram followers"
Mel What On Earth Am I Here ..."
"Original followers of Jesus (pbuh), the Nasorean Jews never believed in Greek Testaments used by ..."
submitter Allah Does not Belong to Islam ..."
"words will never be enough to describe how wonderful and great is God's gift to ..."
kirk czuhai Humility in the Divine
"Thank you Colleen, that means a lot... Please see my interview with Jeff Bethke the ..."
Editor Reflections from the Man in the ..."
Browse Our Archives
get the latest from
New Visions
Sign up for our newsletter
POPULAR AT PATHEOS New Visions
1