Too Legit To Quit

According to the an article in the New York Times, a Nevada brothel owner has been elected to a seat on the Storey County Board of Commissioners. Lance Gilman, the owner of the Mustang Ranch is entering politics.

“You can’t hold it against a person that they’re involved in a profession that’s been in existence since before Jesus walked around in his sandals,” said Corrie Northan, 46, a bartender at the Bucket of Blood Saloon in Virginia City, the county seat. “This state was formed from gambling, drinking and brothels and there’s no shame in that.”

So what do you think? Are the brothel owners “too legit to quit?”

December 17, 2012 December 17: International Day to End Violence Against Sex Workers
Recent Comments
0 | Leave a Comment
"buy soundcloud playawesome"
niggy Ashamed No More: A Review
"buy comments"
aays Having It All or Having Enough?
"There is alot of good info in this article. I am happy to find this ..."
None Rape Babies Are a Gift from ..."
"peace........instagram followers"
mojojo There Are No Enemies
Browse Our Archives
Related posts from Rogue Reverend 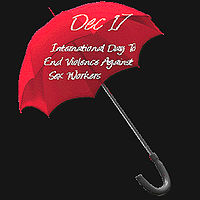 Progressive Christian
It's Not about Trafficking
Rogue Reverend