Phillip K. Dick, a Charleston tour guide, and the Battle of Sharpsburg

There are people living in Sharpsburg, Maryland, so I’ve read, who “can tell you everything about the battle as if it happened to them.” The man who said that was referring to the descendants (he was one of them) of those ― eight generations previously in September 1862 ― who found themselves swept up in the great Battle of Antietam Creek (or the Battle of Sharpsburg as named by Southerners). One single day of fighting resulted in 23,000 dead, wounded and missing. It’s been called “a gash in history that is still healing.”

As if it happened to them. That is a memory of events long removed from personal experience that becomes indelible, a living and seemingly personal memory that persists as people tell and retell it. Sharpsburg is just under 700 people; not any larger than it was in 1862. Anybody growing up there would have heard the stories passed along. Those tales would in some degree become like real memories.
I had the same fierce experience with a tour guide while on a walking tour of Charleston, South Carolina. Charleston isn’t merely a historic city; in our guide’s telling, Charleston is history. Our guide tied her story of Charleston’s story to “us,” “we,” and “ours,” linking herself to events that happened a century or two or three, even four centuries before.
The history of her Charleston wasn’t something that happened to somebody else some other time. It was “our” history she recited as we walked, hers; “my” memory and boiled peanuts the earthquake of 1886. Charleston’s history was, like the man said, as if it had happened to her. Our little tour guide, still in her young twenties, lived all that history and told us tourists about it and, so, to an extent it became our history as well. This is more than a variety of remembering. It is more a Greek word anamnesis (literally, “against forgetting”), where the telling of a past event makes it present now. It is the word Jesus uses for “remembrance.” 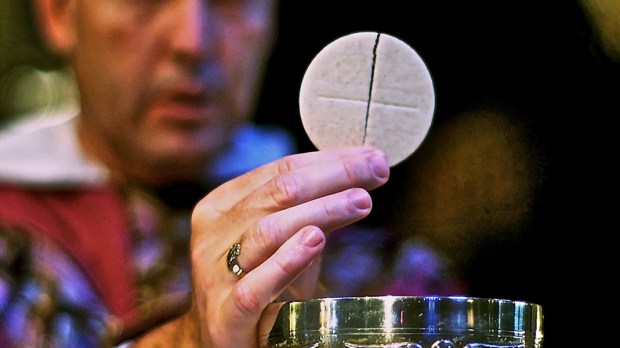 Philip K. Dick was a science fiction writer who died in 1982. He was a idiosyncratic novelist and an Episcopalian Christian. He not infrequently used Christian imagery and Christian themes. Forget Buck Rogers-style space ships and bug-eyed aliens. His science fiction looked at the interior soul coping with exterior threats. He chose themes of paranoia, political repression, the decay of society, and the tenuously plastic nature of reality. For Dick, human life was often living a life of loss, fear, regret ― yet all that was strangely intermingled with the hope of a deeper, more benevolent reality behind or above or under or within the reality we experience; and it is something we once knew.

There was a Truth that was true, but it was almost always shrouded, somehow just beyond reach. His characters possessed a visionary sense of being in touch with some vast reality. They were reaching for it, and it was calling to them.

In his implausibly titled novel Radio Free Albemuth, published after his death, he has a dead-on portrayal of Christian memory:

“Anamnesis, it was called: abolishment of amnesia, the block that keeps us from remembering. We all have that block. There’s a Christian anamnesis, too: memory of Christ, of the Last Supper and the Crucifixion. In Christian anamnesis those events are remembered in the same way, as a real memory. It’s the sacred inner miracle of Christian worship; it’s what the bread and wine cause. ‘Do this in remembrance of me,’ and you do it, and you remember Jesus all at once. As if you had known him but had forgotten. The bread and wine, partaking of them brings it back.”

I have never found a better liturgical description of what is going on in the Mass. The Lord’s Last Supper becomes “a real memory” for us, a real event we live through and remember  it as vividly as if we had lived it but yesterday. It isn’t something Jesus did with some his disciples in Jerusalem once upon a time. It is something he does with us, his disciples in these times.

We join him in the upper room. It is we to whom he speaks when he says he has longed to eat this Passover with us. He speaks to us when he says one of us will betray him, and it is to us he says he will not drink again from the cup until he drinks it anew in the kingdom, ushered in for us.

We live  the whole story, beginning to end, and unexpectedly it becomes our story, as if it had happened to us. It sneaks up on us but we find it is we, ourselves, now who are under discussion. No wonder we remember it so clearly.

And suddenly I remember another phrase. Maybe it’s  s food fad from the 1960s or the whole food diet, or the earlier catabolic diet craze, or maybe it was Grandma who said it first: “Remember, you are what you eat.”

This piece has appeared several places since I first wrote it. Due to an unhappy medical thing I haven’t been able to produce much else originally. So I’m republishing pieces I like here. 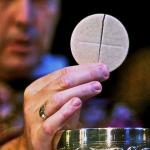 November 9, 2021
Recent Comments
0 | Leave a Comment
"So what's on the agenda after you've criminalized miscarriages, Chuck?"
Statistics Palin The American Solidarity Party Survey Monkey ..."
"Remember: We are ALL in GOD'S loving hands and nothing (not even dementia) can separate ..."
wsurfs . Memories slip-siding away
"Thank you, Manny."
Russell E Saltzman Jesuits in Space
"May you feel God's presence ever more securely as the years go on."
Ame Memories slip-siding away
Browse Our Archives
get the latest updates from
The Vatican II Lutheran
and the Patheos
Catholic
Channel
POPULAR AT PATHEOS Catholic
1

A Virus of a Film: A...
Steel Magnificat
Related posts from The Vatican II Lutheran 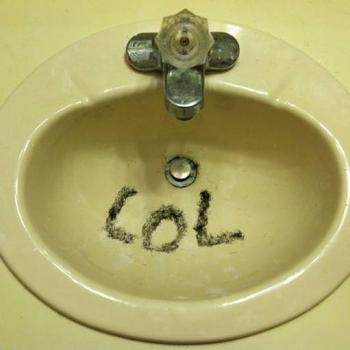 Catholic
Wiry Hair in the Sink
The Vatican II Lutheran