What makes a good daddy–A guest post by Abe Kobylanski

I’m going to be publishing a couple of guest posts this week from some great people! Today, we have Abraham Kobylanski with a belated Father’s Day post, and tomorrow, I’ll be publishing an article by Travis Mamone. Enjoy!

Author bio for Abraham: Abe Kobylanski works at a newspaper like it’s going out of style (it is!). He’s currently between religious beliefs. In his spare time, he has a blog of his own at abekoby.wordpress.com. 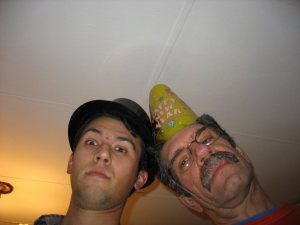 I’ve been told that our dear friend, Mark Driscoll recently said something to the effect of, in order for a father to be a good father, he must be a Christian. As I don’t personally follow Driscoll for many reasons, mainly that I disagree with him on just about everything, I can’t actually confirm this is true (Note from Sarah: it’s true. Voldemark states in this article, “in order to be a good dad, you must be a good Christian”).

But if it is, it’s not the first time I’ve heard a Christian in an authoritative position assert that sentiment.

When I was in college, at The Ohio State University, as a pretty devout Christian, who was pretty deeply involved with the Southern Baptist ministry on campus (I know, let all eyes roll) I was told something similar during a Bible study. I don’t particularly remember what the subject of the evening was supposed to be, as honestly, I remember zoning out and thinking about other stuff quite often during Bible studies, but the subject turned to love, I believe. And the group leader told us that love that doesn’t come from God isn’t true love. To translate for the uninitiated in cheesy, confusing Christianese, that means if you’re not a Christian, you don’t know how to love.

As my father is an atheist, even devoutly Christian me took offense at that.

I took my turn to speak and tell the group that my dad isn’t a Christian, but he treats my mom and me with so much love. I was in college because he chose to pay for it. He has a pretty good job, but it definitely took some saving and planning ahead for him to be able to afford all that. And he worked his ass off for it. That’s just one example of how loving my father was to me.

The group leader said that my dad might do good things for us, but without God’s influence, he wasn’t being the head of the household God called him to be as a man and leading my mother and myself in God’s direction, so that meant he wasn’t really loving the way God instructs us to love.

I disagreed with him wholeheartedly. As I respected the guy a lot, it was pretty difficult at that point in my life to do so. He honestly was a pretty good guy, but I think a bit misguided by some sketchy doctrine and whoever was above him in the SBC food chain.

And, he had never met my father anyway.

When I was younger, I looked up to my father a lot. Even though my mom, who was and still is much more devout than I am, kind of warned me about him because he wasn’t a Christian, I liked him a lot.

That’s because he was a very important part of my life. He always treated me with love and respect. Yes, he would correct me, but only in the interest of my own well-being.

As I grew older, and I started making my own decisions, as with any kid in their developing stages, conflict arose between my parents and me. But as my dad began to see I was a bright kid and not about to get myself into any serious trouble, he trusted me more and more to make my own decisions, even if he didn’t agree with them. And, at several points, he told me that I seem to be satisfied with those decisions, and that’s why he was able to trust me.

Like when I quit piano lessons (something I actually regret 13 years later) because I was trying to get involved in activities at school, and I became more interested in the drums. He supported me.

When I wanted to go to Thailand for a Christian mission trip with my college group, he supported me. He even bought me a digital camera for the trip.

My father always accepted me despite my obvious flaws and always encouraged me to overcome them, even in the few times I didn’t. He always pushed me to be better than I am, but never held me to some unreachable standard.

He was always happy to impart wisdom to me and help me think things through.

It is obvious to me that my dad has always wanted me to succeed, and he never hesitates to tell me how proud he is of me, even at times when I’m not particularly proud of myself.

And he’s always happy when I succeed. He expects me to succeed, not as some sort of ego extension, but just because he thinks that highly of me. And even then, he always seems impressed with me.

As my perceptions of God have been changing quite a bit recently, I’d have to expect that if God exists and is truly good, then all love must come from God in some manner. If that’s the case, then it’s just another example of God’s overwhelming greatness and the love God has for us.

I hope that assessment is true, but whether or not, I don’t think calling yourself a Christian has all that much to do with how you love people or how good of a parent or spouse or lover or friend you are.

Honestly, I don’t know where love comes from, but I know my dad loves me and the rest of our family.

And I hope to follow his example, regardless of what I believe.

June 15, 2012
We teach boys to abuse women. We teach girls that abuse = attraction.
Next Post

June 20, 2012 Why I believe (by someone who shouldn't)--A guest post by Travis Mamone
Recent Comments
7 Comments | Leave a Comment
Browse Our Archives
get the latest from
New Visions
Sign up for our newsletter
POPULAR AT PATHEOS New Visions
1

5 Ways to Hear What God...
Wake Up Call
Related posts from Sarah Over the Moon