“Turn and Face the Strange”

I got married this past August and moved from Michigan to Ohio. When I did this, I attempted to bring along my cat, Smeagol, who had been living at my parents house his entire life.

He was confused by his surroundings. He was afraid of our other cat, Pickle. He was sad that he no longer could go outside without a leash. He didn’t like the neighbor kids.

And so he kind of gave up on life. He stopped eating and drinking. He went and sat in his litter box, and wouldn’t get out. After a couple of days of this, I got too worried and ended up driving him back to his home in Michigan, where he is now–as happy as ever.

And some humans don’t either.

I went into 2013 with a lot of optimism. It was going to be a big year for me. I was graduating from college, finally, after a lot of set backs. I was getting married. I had (or so I thought) found a new faith that finally made sense to me. Early in the year I was invited here to Patheos. Later in the year, after my “new faith” didn’t work out for me and I found myself drawn to Christianity again, I started attending church regularly for the first time since I’d left my abusive fundamentalist church. I was excited for what the year had to bring.

But most of these exciting things involved change.

Exploring a new faith meant dealing with the fact that people who previously took me seriously would now dismiss me outright. I didn’t stick with that faith, and ended up back in Christianity (I think I’m a Universalist United Methodist now if that’s a thing)–that only meant more changes. Attending church again meant being vulnerable, facing fears, and fighting through a few panic attacks while pretending to be singing worship songs.

Moving my blog to Patheos, and blogging at the Spirituality Channel meant learning to write for a wider audience than the one I’d gotten so used to. It meant accepting added responsibility for my words, because I have a slightly bigger platform.

All of these changes were good. I am thankful for my degree, for my marriage, for my still-growing faith, and for my opportunity to grow as a writer.

But they were hard.

Especially since I have a history of severe depression that makes it difficult for me to cope with everyday life, even when it’s stable.

Here, at the beginning of 2014, I find myself feeling solidarity with my poor Smeagol cat. I’m worn out from all the changes. I have to force myself to eat and drink and stay healthy. I sometimes wish I could curl up in bed and stay there all day–in fact, sometimes that’s just what I do.

I’m not excited for the new year, but I hope that will change once I get the medical help I know I need. 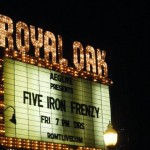 January 3, 2014 #PlanetCCM: Five Iron Frenzy, the Soundtrack to My Deconversion (and Reconversion)
Recent Comments
5 Comments | Leave a Comment
Browse Our Archives
get the latest from
New Visions
Sign up for our newsletter
POPULAR AT PATHEOS New Visions
1