Sometimes I click on click-bait. I admit it. Sometimes I eat Taco Bell too. As you could probably guess, I often regret both shortly thereafter. I didn’t eat a waffle taco this morning, but I did click on that story that’s been going around about Kane Zipperman, teenage guy who broke up with his girlfriend using memes.

And yes, I regretted it.

At first I just closed the tab and rolled my eyes and went about my day as usual. However, a few hours later I saw the same story pop up again on my Facebook wall, this time being shared by Buzzfeed (here’s a Do Not Link version of the story, because that guy’s gotten enough pageviews), who called the dude “Twitter’s New Folk Hero.”

This so-called hero gained his 15 minutes of internet fame (which included an interview with CNN) by texting internet memes (including one mocking children with disabilities) to his unfaithful ex-girlfriend. The memes themselves were boring, poorly used, and offensive, and a lot of people think the dude probably made up the entire exchange.

But by the end of the exchange, it goes from unfunny, immature, and offensive to threatening and disturbing. Zipperman tells his ex (real or not), “I wanna do bad things to you…[like] [m]urder your family.”

A week ago, Buzzfeed, CNN, and other news (or, “news”) sources were covering the story of Elliot Rogers, the Isla Vista shooter who killed several people last week. People were asking, “Where did this guy come from? How could he do what he did?” Folks on the internet were quick to blame slack gun laws, mental health problems, and even mental health treatments such as SSRIs.

Today, some of those same folks are praising a guy who threatens to murder someone’s entire family because she stepped out of line.

Our society is what researchers Glick and Fiske [1] would call an ambivalently sexist one.

Glick and Fiske have done a lot of research on the idea that sexism takes different forms. One can be a hostile sexist–which means one has an extreme hatred of women that often results either in violence or the justification of violence against women. But one can also be a benevolent sexist–a “kinder, gentler” [1] sexist that values women (in certain roles), putting them on a pedestal and wishing to protect them.

Many people in our society respect women and, if asked, would tell you that women do not deserved to be threatened with violence. They don’t deserve to be shot down in the streets of Isla Vista, and they don’t deserve to receive a text from a young man threatening to murder their whole family. “Of course they don’t! Women are our mothers, our sisters, and our daughters! We would never want such a thing to happen to them,” a benevolent man might say.

But that same exact benevolent man is likely to change his mind quickly as soon as a woman steps outside of a “proper” role for women to fill. As soon as a woman stops acting like an innocent, romanticized mother, sister, or daughter, and starts acting like a “bitch,”or a “slut,” or a cheater, the hostile sexism begins to fly. There is research backing this up. [2]

Suddenly, women who receive death threats “had it coming,” while the men who send death threats become heroes. The “bitches” and “sluts,” unlike the mothers and daughters and sisters, are just asking for violence.

The same benevolent men who put women on a pedestal are often the ones punishing any woman who decides to step off of it.

This is why CNN and Buzzfeed can mourn a tragic shooting one week, and interview a “Twitter hero” who threatens women with violence the next. This is why one week, #YesAllWomen goes viral, and the next week Kane Zipperman does.

When men cheat on women, they are excused for it. Sometimes women are even blamed for it–they shouldn’t have “let themselves go,” right? (Even here we see here an instance where a woman who doesn’t adhere to certain roles–in this case, the role of meeting a certain standard of “attractiveness”–being seen as “asking for” whatever happens to her) Yet, when women cheat on men, they are stepping off the Good Woman Pedestal, and therefore death threats are acceptable, even hilarious and heroic.

I’d like to think society is improving in it’s views toward women. I’d like to think the success of #YesAllWomen shows that men are starting to learn and listen. But then Kane Zipperman goes viral, and I put my fists back up.

We’ve still got a lot more fighting to do.

June 11, 2014 A Benediction for My Fellow Queer Christians
Recent Comments
5 Comments | Leave a Comment
Browse Our Archives
Related posts from Sarah Over the Moon 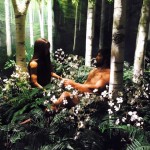