The Hopeless Innocence of Amelie

I’ve known about Amélie (2001) for a long time, but only recently decided to sit down and watch it after a co-worker of mine said it was one of her favorite movies. This French film follows a woman named Amélie Poulain from her mother’s tragic (if rather darkly comedic) death in her youth to her adult life coping with her reclusive father and waiting tables at the Two Windmills café. Her life changes the day Princess Dianna dies. While watching the news through the door of her bathroom, she drops a bottle cap, which rolls down the tiled floor and knocks loose a side panel. Behind the panel, Amélie finds a box of old trinkets. Through investigations, she locates the now-adult owner and concocts a secret way to return his long-lost possessions. After this successful good deed, Amélie feels empowered to help many of those around her.

There is much to love about this film; there’s a reason many people put this movie at the top of their favorite movies lists. The music is innovative, the cinematography is beautiful, the plot is engaging with its host of lovable-yet-quirky characters, and Amélie’s almost surreal world is engrossing. This world is a product of her childhood habit of turning to imagination as a way to escape her own sense of loneliness. The film is infused with Amélie’s naiveté, which imbues a lightheartedness to the whole story, confronting suffering as a child would, with hope that things can and will change for the better. 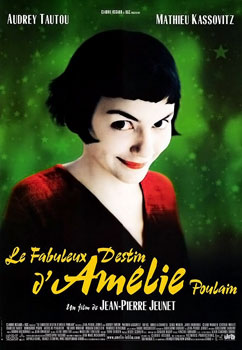 Amélie plays matchmaker for her hypochondriac co-worker and a similarly eccentric patron. She records interesting clips from TV and takes the recording to Mr. Dufayel, a neighbor who cannot leave his apartment for fear of shattering his brittle bones. Amélie persuades her father to explore the world by sending him photos of his treasured gnome statue (which she stole) at different international landmarks. She stands up for Lucien, a one-armed, much-ridiculed employee of the local grocer, and even sneaks into the unkind grocer’s apartment and plants a series of practical jokes that convince him that he may be going insane. When Amélie forges a back-dated reconciliatory love letter from a husband (now dead) to the woman he abandoned years before, the woman is overcome with joy.

One of her last good deeds to do is to return a man’s photo album that fell out of his motorbike. This man, Nino Quincampoix, has compiled this photo album using discarded photos from the metro photo booth (which seems to indicate that he’s as odd as Amélie). In her quest to return this photo album, she develops a crush on Nino, but is too timid to initiate a romance. She returns the photo album anonymously, as she did with the box of trinkets, but leaves some masked photos of herself in the album, one of which asks if he’d like to meet.

Nino responds with persistent attempts to make contact with her, despite her equally persistent hiding. Eventually, with the support and prompting of Mr. Dufayel, she meets Nino and they spend the night together (which is perhaps an allusion to a rite of passage to adulthood, where she is finally leaving the comforts of isolation and going into the real world).

On the surface, Amélie, by the very way it’s made, is a call to see the world through the eyes of innocence and to find joy and laughter in all things. All the characters have rather sorry lives, which would normally make a story a sad one. We would expect this coming-of-age story to depict the process of confronting suffering and being jolted awake. But what dawns on the viewer as the film ends is that Amélie doesn’t actually grow up. She may have found love, yet that love seems to be fantastical in its idyllic shape. Amélie portrays its protagonist as a likable character because of her good deeds, her charming incorruptibility, and her courage to step out and find true love. To me, this was strangely unsatisfying.

When Jesus asked us to emulate the faith of children, he wasn’t calling us to a naïve trust. The very fact that Jesus had to push this kind of child-like trust in the Father demonstrates that our natural inclination is to do the exact opposite, particularly in the midst of hardship. Amélie, on the other hand, naturally finds it easy to have a cheery view of life because she is seemingly oblivious to what tragedy means in the rawest sense. What Christians are called to do is to get up close and personal with this raw suffering, recognize it for what it actually is, and then speak to that suffering with gospel-filled hope and trust.

This is mere speculation, but I think what we see in popular culture is a trivialization of pain, in spite of the swelling numbers of young people joining philanthropic causes. That’s what makes movies like Amélie so appealing. Suffering can be seen in a different light—the flip-side of the coin—that helps us understand the beauty of suffering or the celebration of human experience. I think we fear seeing life as it actually is—hopeless apart from Christ. This reality is too devastating to face. The balm of self-help ideas and inspiring films and stories can only temporarily keep hopelessness at bay. This temporary fix is the best a secular humanist can give. The hope that Christ offers, on the other hand, is soaked in blood and lasts forever.

Now, let’s take a breath and get out of this heady, intellectual analysis of the film’s themes and conclude. I would recommend Amélie for anyone that enjoys foreign films. You really do fall in love with the characters and enjoy a good laugh (or several), since it’s supposed to be a romantic comedy. Be warned: there are a handful of scenes with sexual content (though the film maintains that Amélie is in no way tainted by them). Overall though, a fun weeknight flick—lean back, relax, and enjoy the show.

December 11, 2012
I’m Dreaming of a Selflessly Sacrificial Christmas
Next Post

December 13, 2012 Lord of the Rings: A Timeless Trilogy
Recent Comments
0 | Leave a Comment
"hmm interesting and informative information, and would like to add interesting information from myself. I ..."
Steve Andrews Violence and Sports in Netflix’s “Malice ..."
"Fair enough--though I do have to wonder at what point someone who believes in ongoing ..."
cneal Common Grace, 2.50
""... we're not deists and don't believe God has created and then left." Not all ..."
Deist1737 Common Grace, 2.50
"I am aware of those kinds of discussions and statements (and even of the fact ..."
cneal Confronting the American Gospel
Browse Our Archives
get the latest updates from
Schaeffer's Ghost
and the Patheos
Entertainment
Channel
POPULAR AT PATHEOS Entertainment
1