Who are your people?

How should we think of ourselves as believers? When I think about my identity, how should things like ethnicity and nationality figure in? Obviously these have been big issues in America generally and within the American church specifically for the past few years. Such struggles are not new for Christians, and Steven Bryan wants us to turn to Scripture’s teachings about culture, ethnicity, and nationality to shape our thoughts here. To that end he has written the new book Cultural Identity and the Purposes of God: A Biblical Theology of Ethnicity, Nationality, and Race.

Brayn is especially well positioned to write on this topic. Although he now teaches at Trinity Evangelical Divinity School, Bryan served for decades in Ethiopia as a missionary and educator. Though he certainly has thoughts about the American political setting, he is not as deeply entrenched in the same cultural battles the rest of us are.

Bryan argues that Scripture gives us a complex view of the relationship between the individual, culture, and God’s, well, purposes. In short, becoming a Christian is something that individuals do, and in that sense our faith transcends culture. But faith also affects culture, both in terms of shaping the kinds of sins which we are saved from and in terms of affecting the culture as more and more people are converted. Likewise, as individuals convert the church itself is affected positively and negatively as people bring their cultures into it. We also see in the pages of Scripture a sort of pattern that cultures follow as they rise and fall over time and that the church has to interact with these cultures all along the way. We also see that when we become believers we join a community/nation/ethnicity/culture/race/etc that transcends that out of which we were saved. But we also see a community that is made up of people who do not give up their identities but instead enrich the unified community by their diverse contributions.

And, well, again, it’s a complex view that a short review like this can’t do justice to. It’s also a view that I suspect won’t satisfy most of the unsatisfied people. Bryan does not choose a side in the culture to vindicate while condemning the opposition, even as he encourages us to reject extremists of all stripes–both those who would dissolve worldly cultures into nothing (and therefore functionally favor their own culture over those being dissolved) and those who would idolize their own cultures or all cultures. Which means he probably won’t be heard by those who most need it. Which is unfortunately, because this is a good and worthwhile book that we can pray would serve the church well. 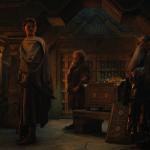