Europeans increasingly drawn to the occult 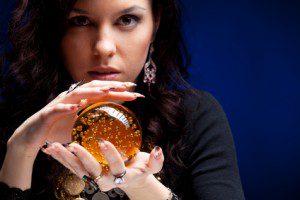 Many atheists see Europe as a trend-setter for the rest of the world: Europe has become less religious over the years, and soon the rest of the world will follow (if it manages to become so enlightened). However, simply because Europe has become more atheistic does not mean it has become a bastion for reason and science. As research by European ethnologist Sabine Doering-Manteuffel (University of Augsburg) suggests, belief in occult forces is growing in Europe.

This may be surprising considering that Europe has embraced materialism, mechanical philosophy, and technology. Doering-Manteuffel, following various historians, argues that technology enables the unprecedented spread of occultism. She states that the first real wide-spread belief in the occult occurred shortly after the invention of the printing press in Europe. Mass media transmits information quickly and efficiently, regardless if that information is about science or occult forces (see, for example, the early modern mass printing of Tarot cards).

She further argues that the modern media revolution, the Internet, explains why the occult is currently growing in Europe. The Internet merely facilitates communication, which means everyone with Internet access also has access to a community of people with whom they agree. This means, as Doering-Manteuffel puts it, that “the medium itself has taken on an occult structure.” That is, the Internet, with its ability to encourage group-think, lends itself to taking on an occult structure (this of course need not be limited to occultism but likely has application wherever group-think exists on the Internet, which is practically everywhere).

Interestingly enough, Doering-Manteuffel points out that while the invention of occult forces such as angels and karma occurred well before the modern period, their popularization in the wider society did not occur until the modern period. For instance, Great Britain saw the height of the popularity of guardian angels in the 17th and 18th centuries. Occult books came to outsell scholarly books in France by the end of the 18th century. The rise of fortune-telling, clairvoyance, channeling, past life regression, card reading and horoscopes in Europe all date to the 19th century. Modern occultism is truly modern.

While the Internet media revolution explains how the popularity of occultism spreads, it does not explain why. Doering-Manteuffel admits that at this point the best one can do is speculate. She offers two hypotheses: (1) people see belief in the occult as not contradicting their belief in science, and (2) scientific or even reasonable solutions do not exist for all of life’s questions.

Regarding the first hypothesis, Doering-Manteuffel imagines that someone could see the occult and scientific beliefs as working hand-in-hand to explain the world. Science would handle the parts of the world that require reason and verification, while the occult would tackle the rest. Science and the occult cannot contradict each other because they address different aspects of life.

As for her second hypothesis, Doering-Manteuffel tells a fictional but plausible story. A woman and man first meet and enter into a relationship, but the woman feels like her love is not being returned. She seeks a psychic who tells her that she and her lover have known each other in past lives, and that, in order to move forward, she must complete a task that she has thus far failed to complete in her previous lives. This may sound far-fetched, but the distressed woman now has a purpose in life upon which to act. Science cannot say what the purpose of life is, and if anything, it implies there is none. Such conclusions, even if true, would likely not meet this woman’s criteria for useful relationship advice.

Many would likely scoff at anyone seeking a psychic for relationship advice (especially when the service charges per minute). If Doering-Manteuffel’s research is correct, however, occult belief is growing, and so scoffing may no longer be a sufficient response. Besides, rather than scoffing, reason should be applied to the situation—that is the way of science.

For more, see “Survival of occult practices and ideas in modern common sense” in the journal Public Understanding of Science.

December 13, 2012
Why atheist scientists bring their children to church
Next Post

December 27, 2012 How are religious values passed down through families?
Recent Comments
0 | Leave a Comment
"menangqq adalah situs permainan poker Online dengan server kualitas terbaik dan bonus ratusan juta rupiah"
berbonusqq When the Social Order Has Legitimacy ..."
"This post is spot on. The problem is accentuated by a disparagement of cultural traditions ..."
Positivist Is Academia a Failed Initiation Rite?
"Another example of WIERD being, well, the weird exception to the rule.The "missing second half" ..."
Kevin Kostlan Is Academia a Failed Initiation Rite?
"Good points, Elritus.I think often times folks are right to resent a system (or System) ..."
connorwood The Symbolism of Old Gods and ..."
Browse Our Archives
get the latest from
Science On Religion
Sign up for our newsletter
POPULAR AT PATHEOS Public Square
1

Faith in numbers: Behind the gender...
The Conversation
Related posts from Science On Religion