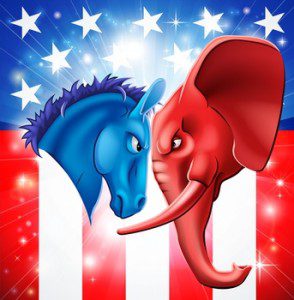 Ugh, politics. Congressional Republicans are determined to stop President Obama’s Affordable Health Care Act from ever getting off the ground, and they’re willing to hold the entire government hostage to get their way. To many people (including sometimes myself), these Tea Party-style priorities seem incomprehensible – not to mention cruel and reactionary. Who on Earth wouldn’t want to give as many people as possible affordable health care? But one perspective, informed by role of religion in traditional cultures, can at least help explain some of the conservative resistance. This doesn’t excuse governmental loggerheads, but it might help some of us to stop talking past one another.

To a liberal or progressive, it’s axiomatic that the government is morally obliged to provide services like affordable health care. If a society has the power, wealth, and means to prevent children from dying of lymphoma, or to provide eye surgery to a poor working mother, then it is morally mandated to do these things. To deny this ethical truth is pretty much the definition of being, well, a jerk.

Now, I’m not going to deny that there are some jerks out there. But not everyone who argues against the Obama health care law is one. To understand why, we need to consider one important factor: humans are social animals. We tend to live out our lives in small communities of mostly familiar faces. Homo sapiens has been around for 150,000 to 300,000 years (depending on who you ask), but we only decided to build cities for the first time about 10,000 years ago. Big, cosmopolitan societies like the modern United States are historical anomalies. In other words, most people throughout history have directly known the people they depend on, and who depend on them.

This is very, very different from today’s Western world and other developed societies. In such economically advanced nations, most people have virtually no personal knowledge of the people who depend on them, or on whom they depend. Do you know the truck driver who delivered your cereal to the grocery store? No, you don’t. Do you know who fixed the power lines, dangling in a harness with a hardhat in the rain, the last time a storm knocked out your power? Chances are very good that you don’t.

The big difference between progressive social morality and conservative or traditionalist morality is, I think, that progressives are much more comfortable with these abstract systems. If people are poor, progressives believe, it is the same vast and largely impersonal systems that provide for all our needs – delivering electricity, growing food, paving and plowing streets – that should help them back on their feet.

Conservatives and traditionalists, on the other hand, are more wary of – and somewhat out of their element in – big, abstract systems, especially when it comes to providing social goods. A big part of the reason for this is religion.

Why? Religious traditions from Catholicism to Cambodian village Buddhism have, in a very large part, always been about linking people into tight, personal networks that provide social and material benefits. A good example of this in today’s world is Brazilian Candomblé, an African-based syncretic religion that is largely practiced by the urban poor. Candomblé practitioners are famous for providing for each other in times of need, including both spiritual and material resources. It’s the religion that does the community-forming work; the most ritually active practitioners are the most generous and giving to their peers, for instance.

But you don’t need to fly to Brazil to see how this religious function works.* Go to any small Midwestern town and see how central a role the local churches play, not only in the spiritual life of the community, but in its practical, material existence. Churches are where resources are pooled, such as canned goods, and where valuable information is exchanged – who’s hiring, which doctors are good, who needs a babysitter.

The more you take part in such a small-scale community, the more your own religiously shaped, interpersonal obligations come to shape your behavior. For example, if you become deeply embedded in a Candomblé community in northern Brazil, you’ll probably find that, over time, much of your free time becomes devoted to helping other members of your community.

So what’s the hitch? Why can’t religious people and conservatives simply switch over to a larger, more systemic – and, possibly, more effective – system for providing goods to people, such as Sweden’s social safety net or Canada’s nationalized health care? Religion, after all, has often dazzlingly failed at helping society’s poor in places like India, which is both deeply religious and wildly unequal. Religious practices may have been the best game in town for thousands of years, but we’ve come up with something new and better now. Right?

Well, maybe. The best and most worthwhile objection to large social systems comes from the fact that in small-scale cultures, where religious practices and rituals drive interpersonal relationships, people get both their life’s meaning and their material support from the same place. I’m talking about the kind of meaning that comes from aiding others; the Atlantic recently published a fascinating article on the difference between meaning, which comes largely from helping others, and hedonic happiness, which comes from getting your needs and wishes met. Meaning, all things being equal, was a much better predictor of life satisfaction.

So the most pressing conservative or traditionalist problem with big social safety nets isn’t the Randian fear that helping the poor will make it more difficult for talented people to succeed. It’s the danger that, by transferring the responsibility for providing basic social goods away from local and/or religious communities to larger, more abstract systemic platforms, cultures divest people of their obligations to personally care for one another. With that can come a serious reduction in mental well-being and increase in loneliness – and in lack of meaning.

Because of the spectacular utility and effectiveness of this new, abstract system, the feedback cycles that keep communities bonded together begin to falter. Once people see that personal relationships aren’t needed to survive, they tend to transition from very tight, bonded relationship networks to looser, more discretionary ones. In other words, communities that don’t need each other don’t stay communities. They become population clusters.

Here’s the famous conservative philosopher Russell Kirk on the dangers of what happens when, “in the name of an abstract Democracy, the functions of community are transferred to distant political direction:”

In a genuine community, the decisions most directly affecting the lives of citizens are made locally and voluntarily.…For a nation is no stronger than the numerous little communities of which it is composed. A central administration, or a corps of select managers and civil servants, however well intentioned and well trained, cannot confer justice and prosperity and tranquility upon a mass of men and women deprived of their old responsibilities.

Now, let me make myself absolutely clear: I am not arguing that this conservative objection is necessarily valid. What I am arguing is that it is the unspoken fear driving much of the debate around things like the Affordable Health Care Act. If progressives were to articulate their case for large-scale social programs in a way that directly addressed this fear of a culture filled with loneliness, weakened ties, and lack of meaning, then some of the sticky resistance to affordable health care might melt away, or at least loosen a little. But progressives aren’t having this argument. They’re arguing with people who don’t want to share their resources because they are selfish, poor-hating, or lacking in compassion. The problem is that, by and large, the people progressives are arguing with don’t exist.

Conservatives worry that offloading social responsibilities to an impersonal, systemic platform will corrode the collective bonds of daily, local life.† But (other than Russell Kirk) they aren’t very good at expressing this fear, and progressives aren’t very good at understanding it. And there is some evidence to suggest that conservatives’ wariness about big, society-wide systems is warranted; social fabric has, indeed, weakened in the decades since the introduction of social welfare programs such as Social Security, as Robert Putnam has exhaustively described. This probably isn’t coincidence, if outsourcing social responsibilities to big abstract systems does, in fact, hurt people’s motivation to take part in local community life.

But it’s also clear that religions and small, local groups have historically let many slip through their cracks: outsiders, gays, children, nonbelievers. If religious groups could be counted on to provide for everyone, then we could happily cut loose our safety nets. But we can’t count on religions or local communities to carry out this task. Personal relationship webs are filled with holes, and the people who comprise them are flawed – just as we all are.

But nobody in this debate is a villain. If we learn what motivates the people with whom we passionately disagree, we might have better conversations. And one of these years, hopefully before the sun goes nova, we won’t have to suffer through yet another government shutdown (please).

* Although you might want to anyway. Especially in, oh, about mid-February.

† This is not the only reason Republicans in Congress are against Obama’s health care law. There are corporate and moneyed motivations, special interests, and resistance to Obama’s leadership. Both parties have become hyper-partisan over recent decades, and congresspeople have stopped socializing together. I can’t do anything about or shed any useful light on those things, however, so I’m focusing on the one area where I can offer useful perspectives.

October 7, 2013 Civil Religion: It's What America Needs
Recent Comments
1 Comment | Leave a Comment
"Look up Bayesian Inference, Active Inference is related to this. Active Inference is about acting ..."
Bryan Free energy, the brain, and religion
"If possible, could you clarify your point? I agreed before reading that section and now ..."
P S Free energy, the brain, and religion
"Where does progess come from? The final frontier and a new conversation begins here: https://www.lavitanuova.org.uk"
klatu A Farewell to Patheos
"Substack!!"
EricH A Farewell to Patheos
Browse Our Archives
Related posts from Science On Religion