Yes, fundamentalism is religion. And it starts wars. 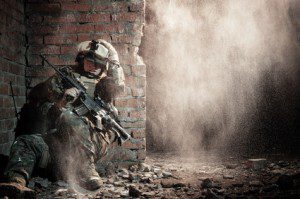 There’s a saying: no true Scotsman would ever drink Irish whiskey. Or move to London. Or put sugar on his porridge. But this saying’s not actually about Scottish people. It’s about our own willingness to play with our categories, stretching them to fit our prejudices. For example, if you claimed that “no religious believer would start a war,” current events – particularly the ISIS assault on Iraq, which has claimed thousands of lives and threatens to extinguish entire cultures – would prove you wrong. So you might backpedal: “Well, no true religious believer would start a war.” But this would be a fallacy. What’s going on in Iraq has everything to do with real religion. Fundamentalism is a real piece of the religious puzzle – and a surprisingly fragile one.

The “no true Scotsman” fallacy is often used to claim that no real, believing Muslim could be a terrorist. But the war in northern Iraq is impossible to separate from Islam. The self-proclaimed caliph of the Islamic State of Iraq and Syria (ISIS), a seriously bearded man named Abu Bakr al-Baghdadi, is motivated by many things in his military takeover of northern Iraq. Religion is the most important one. Al-Baghdadi wants to install a Sunni Muslim caliphate in the Middle East, impose hardline Islamic law, and either forcibly convert or kill anyone who doesn’t accept his fundamentalist Sunni Wahhabism. Yes, there are also plenty of secular, political, and economic issues driving ISIS (sometimes also called the Islamic State of Iraq and the Levant, or ISIL), from control of Kurdish oil fields to lingering bitterness from the 1980s Iraq-Iran war. But even these questions are utterly bound up in the religious identities that pit groups against one another and provide the transcendent symbols around which groups of people rally.

Religion is central to culture. Sociologist Emile Durkheim pointed out that religion is what generates the solidarity and traditions that glue societies together. But I want to focus on two other sources of religion’s influence on human affairs: the need for meaning and the fear of death. These are real psychological motivators, and they drive our behavior far more than most of us realize. If we want to understand religion’s dark side, we need to face them.

According to famed psychologist Roy Baumeister, meaning is one of the two basic sources of psychological well-being. The other, happiness, is a kind of moment-to-moment good feeling, the sort of emotional response we have when things are generally going our way, our bellies are full, our bodies healthy. Happiness is transient and dependent on getting our needs and wishes met. Meaning, on the other hand, is a broader thing, encompassing both past and future. Rather than arising from our own satisfied needs, meaning stems from our sense that we have contributed to others or to the group. It’s what makes us feel that our lives have been worth it. And as Baumeister has provocatively found, happiness and meaning aren’t necessarily parallel. In fact, people who have encountered more adversity and suffering in life often report feeling more meaning.

The fear of death is another powerful motivator. A well-substantiated psychological concept, Terror Management Theory, claims that cultural and religious frameworks take the existential sting out of death. By constructing worlds of meaningful symbols, religions provide people with the tools to see themselves as part of something greater that will outlast their own temporary lives. In lab studies, subjects primed with reminders of death show an increased focus on religious symbols – and these symbols then reduce subjects’ anxiety.

Religious fundamentalism meets both these needs, handily. Roy Baumeister has cited religious terrorism as one of the potential sources of meaning for in today’s world. And Terror Management Theory researchers have found that religious fundamentalists have a greater fear of death than average folks, and that their beliefs help ward off this fear.

…the belief that there is a single set of religious teachings that provide absolutely truths that, if followed, lead to special relationship with the deity, and that must be vigorously defended.…(and) the assumption that an inerrant text demands complete unquestioning submission.

Boston University sociologist Adam Seligman argues that fundamentalism relies on texts rather than rituals, on individual intellectual assent rather than tradition – and so is actually a uniquely modern form of faith. As Enlightenment culture threatened the religious systems from which people drew meaning and existential comfort, some religious leaders co-opted the modern forms of thought and applied them to religion. The result was a form of faith that spurns tradition, derides metaphor, and insists on “explicit, analytic processing” rather than intuitive or heuristic forms of thinking.

In other words, fundamentalism is extremely brittle, and it doesn’t survive contact with reality very well. Psychologists Mike Friedman and W. Steven Rholes found that fundamentalists’ beliefs could be easily shaken when confronted with inconsistencies in Bible. This is why fundamentalism has such a problem with modernity: it’s fundamentally a product of modernity, but when placed in direct competition with modernity it always loses. This dynamic explains the isolationist and absolutist nature of many fundamentalist communities. If you believe that the world was literally created in six days, you’d better wall yourself from modern culture and science in order to avoid the facts. Or the facts will come to you.

But there’s hope. One study found that hardline fundamentalists were quicker to advocate harsh military action against members of other traditions. This was unsurprising – fundamentalism has often been correlated with ethnocentrism and anti-outgroup prejudice. But there was a catch. When reminded of the compassionate or universalistic tenets of their faiths – “Thou shalt not kill” or “Love your neighbor as yourself” – fundamentalists became much less likely to support violence against outgroups than other participants. This finding drives home a key point: every religion has many different facets that can be emphasized or not. When we highlight the compassionate and noble stuff, people tend to respond compassionately and nobly. Importantly, this is especially true for people with the strongest need for meaning and the greatest fear of death.

Islam is a perfect example. Theologically, Islam is rich and thought-provoking. Its obstinate monotheism is challenging and profound. Islam boasts a rich and valuable storehouse of wisdom, including a deep historical emphasis on logic, inquiry, and cultural accomplishment. There’s a reason it was Muslim culture that kept Greek philosophy alive during the Dark Ages, and later invented algebra. There’s a reason the Caliphate and the Ottoman Empires lasted so long. I say these things not out of some banal political correctness, but out of genuine respect for Islam.

But alongside its history of enlightened, Greek-influenced monotheism, Islam contains strands of no-holds-barred cultural imperialism and apocalyptic trapped-animal defensiveness that can become outright catastrophic when activated thoughtlessly. ISIS is a frightening example of what happens when these destructive forms of Islam rumble to the surface.

And of course, this scary, Janus-like multiplicity isn’t limited to Islam. European culture boasts a powerful tradition of market-based egalitarianism and liberal inquiry. It also has a horrific tendency to force its own values and traditions brutishly on the rest of the world. (Today’s self-righteous scientistic rationalism is the latest version of this ugly habit.) There is no culture, or religion, that doesn’t possess this disturbing capacity to manifest as a source of meaning and value or a bog of persecution and fear.

The upshot? The cure for fundamentalism isn’t religion-free secularism. It’s better religion. The need for meaning and the fear of death aren’t going anywhere. And this means – like it or not – religion is here to stay. It’s our choice to determine which sort of religion it’s going to be. The only antidote to fundamentalism is religion that doesn’t constantly force its adherents into epistemic corners, that provides meaning and coherence without buckling or caving in when confronted with reality. Fundamentalism cannot do these things. It can’t deal with the truth. It’s too rigid, too inflexible. This is why fundamentalism is so dangerous. It’s a junkyard dog that’s always getting cornered.

Religions have the tools to make people better and evoke our nobler natures. They also have the tools to turn people into monsters. Above all, religions are human culture’s most powerful tool for the construction of meaning – they provide a context and purpose for individual human lives. We need to confront religion directly and boldly, challenging it to manifest its better nature and refusing to explain away its dark sides. This will be a far better and more effective strategy than the current waffling tendency to simply clear our throats with embarrassment whenever it comes to questions of culture and religion – or to simple-mindedly insist that religions disappear.

August 4, 2014
Believing Impossible Stuff Is Dangerous. Except When It’s Awesome.
Next Post

August 18, 2014 Mental illness: it's not just in our brains.
Recent Comments
0 | Leave a Comment
"menangqq adalah situs permainan poker Online dengan server kualitas terbaik dan bonus ratusan juta rupiah"
berbonusqq When the Social Order Has Legitimacy ..."
"This post is spot on. The problem is accentuated by a disparagement of cultural traditions ..."
Positivist Is Academia a Failed Initiation Rite?
"Another example of WIERD being, well, the weird exception to the rule.The "missing second half" ..."
Kevin Kostlan Is Academia a Failed Initiation Rite?
"Good points, Elritus.I think often times folks are right to resent a system (or System) ..."
connorwood The Symbolism of Old Gods and ..."
Browse Our Archives
get the latest from
Science On Religion
Sign up for our newsletter
POPULAR AT PATHEOS Public Square
1

Faith in numbers: Behind the gender...
The Conversation
Related posts from Science On Religion