The Natural History of Music 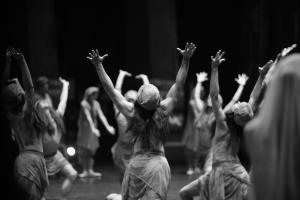 I’m teaching a course on the evolution of music through Scholarium in January and February. Or, more accurately, I’m teaching about the origins of human rhythm — our unique ability to “keep together in time.” Have you ever seen a group of dogs pounding their paws in rhythm on the pavement, jamming out together? No, because they lack the kind of brain you need to be able move your body in time to an audio rhythm. Why would humans have these skills while other animals don’t? The course I’m teaching, “A Natural History of Music,” will drill down into this question using anthropology, cognitive science, neuroscience, comparative biology, and even philosophy. It’s aimed at anyone interested in music, human evolution, cognitive science, or ritual.

Interestingly, most of the other animals who can keep a beat are birds. (Check out some of the excellent YouTube videos of the famous dancing cockatoo Snowball to see more about this.) In many ways, birds’ brains are more functionally similar to human brains than those of our closest evolutionary relatives, the great apes — chimpanzees, bonobos, gorillas, and baboons. For example, many birds mate semi-monogamously and for life.* Humans, like these birds, are largely a pair-bonding species (with some polygamous tendencies). But chimpanzees males attempt to mate with as many of the females in their band as they can, while trying to prevent the other males from doing the same. Exclusive pair-bonding is nonexistent.

And none of the other great apes can dance, at least not rhythmically. Chimpanzees sometimes do what researchers call “rain dances,” wherein they jump up and down and get excited at the approach of rain (or waterfalls), but this jumping isn’t rhythmically entrained. That is, the chimps don’t move in time with each other. Similarly, chimps sometimes occasionally beat on hollow logs, making a resonant, drum-like noise, but these displays rarely make a regular rhythm. Some chimpanzees and other simians can tap their fingers in time with recorded beats, sort of. But they’re not very good at it compared with humans.

Humans, on the other hand, start trying to bounce in time with music in early infancy. By the time we’re three or four, we can clap in time to a beat far better than any other great ape.**  Unlike chimpanzees or other nonhuman primates, then, we seem to be strongly motivated to partake in music. Neuroimaging studies show strong activation of the brain’s reward centers when we listen to music, while syncronizing with others — clapping or drumming in time to a shared beat — triggers social bonding and cooperation (usually).

Why are birds more humanlike than chimps when it comes to music? Some researchers think the connection may be that both humans and many birds — especially songbirds and the parrot family — are vocal learners. Just as humans don’t come out the womb knowing how to speak English or Mandarin or Basque, songbirds hatch without knowing their species’ unique songs. They have to go through a period of listening to adult birds, imitating and practicing their songs until they master them.

Vocal learning, in turn, requires rich connections between the audio and motor parts of the brain. In vocal learners, the brain’s reward system is also oriented toward social learning and imitation, which may make it easier for individuals to track each other’s actions and — potentially — to entrain to a shared rhythm.

The problem with the vocal-learning hypothesis is that at least one sea lion has been taught to “dance” (vigorously bob her head) to human music. (Extremely entertaining video here.) As far as we know, sea lions aren’t vocal learners. They’re very social and gregarious, but then so are chimpanzees. So Ronan (the name of the dancing sea lion) seems to throw a wrench in the theory of vocal learning as far as explaining why some animals, but not others, can keep a beat.†

One way to better understand where music came from, evolutionarily speaking, is to examine what function music and dancing play in human life. One recent pair of scholarly articles argued, respectively, that either music bonds people or serves as a signal of preexistent bonding. In both cases, music is important for socializing.

This may help explain why, although some birds and other animals can learn to dance, humans everywhere do learn it. Parrots and cockatoos don’t make rhythmic dance music in the wild. Most don’t even seem that interested in music in captivity — only a few, like Snowball, seem driven to “groove.” (Although the number of YouTube videos of dancing parrots is growing.)

By contrast, as we’ve already mentioned, nearly all humans seem to come into the world predisposed to learn to dance and make music. And humans live in large, complicated social groups — even more complicated and multilevel than those of parrots. Unlike parrots, we give our groups names, from the “bear clan” all the way up to “the United Kingdom,” using symbols from unique face painting to national flags to reify those groups (that is, make them seem more real).

It may be that something about über-complex human social groups created an evolutionary need for a new method of social bonding, and music filled that need.

In “A Natural History of Music,” we’ll be exploring this relationship between symbols, human sociality, and music, covering the neuroscience behind rhythmic entrainment, and diving into the effects of music on social relationships and the brain. We’ll also look at the role of music in ritual — the “basic human act,” in anthropologist Roy Rappaport’s words. After all, religious and civic rites of all kinds nearly always include music — and sometimes dancing.

Class on Zoom will meet six times: each Wednesday at 6:30pm Boston time, from January 5th through February 9th. Tuition is USD $120.00 for the whole course, which works out to $20.00 per meeting, or about $13.00 per hour of class time. (By comparison, online classes through a name-brand university might run you between $100-$200 per hour, plus fees.)

Classes will feature about an hour of lecture with visuals and a half-hour of group conversation, Q&A, and breakout sessions. Optional readings will help you consolidate and build on your knowledge between meetings.

From my humble point of view, “A Natural History of Music” is a darn good chance to learn about human nature from both scientific and philosophical angles at the same time, right from the mouth of an expert in evolutionary anthropology. Who can also talk philosophy.

Not a bad way to start the new year. Sign up here.

*I say “semi-”monogamously because many pair-bonding birds have been known to cheat on each other, like Jersey Shore characters, despite remaining bonded. Nature is full of drama, isn’t it?

** With the exception of many Protestants.

† As I’ve written here before, one similarity between sea lions, birds, and humans is that all three live in more three-dimensional natural environments than chimps do. It may be that auditory signaling is particularly important for animals that need to communicate with each other in three dimensions (back/forward and left/right, as well as up/down), and the resultant brain wiring makes rhythmic entrainment easier. We’ll talk about this in the course. Which, by the way, you can sign up for here.

December 30, 2021 More Signal, Less Noise
Recent Comments
0 | Leave a Comment
"Thank you for sharing you can download Spotify Premium APK completely free here : https://coimobile.com/spoti..."
cory coru day The Natural History of Music
"Connor, have you perused the Biologos website yet? Biologos is an organization largely of evangelical ..."
Heather G Mashal Faith and the Evolutionary Predicament
"...give it some reasonable thought, eh? While Russia commits an ongoing war crime against Ukrainian ..."
Michel So Long, Pax Americana
"The West DID behave well toward the Soviet remnants! If you trace the interactions with ..."
Michel So Long, Pax Americana
Browse Our Archives
Related posts from Science On Religion