Since the lockdown began, more than 200 Scientology Volunteer Ministers have volunteered over a million hours in service to South Africa. They sanitized thousands of buildings across the nation. And they protected millions throughout the country.

In honor of their service, Castle Kyalami in Midrand, South Africa, hosted an awards ceremony this week. And officials acknowledged the Volunteer Ministers for the incredibly selfless work they performed over the past two years. 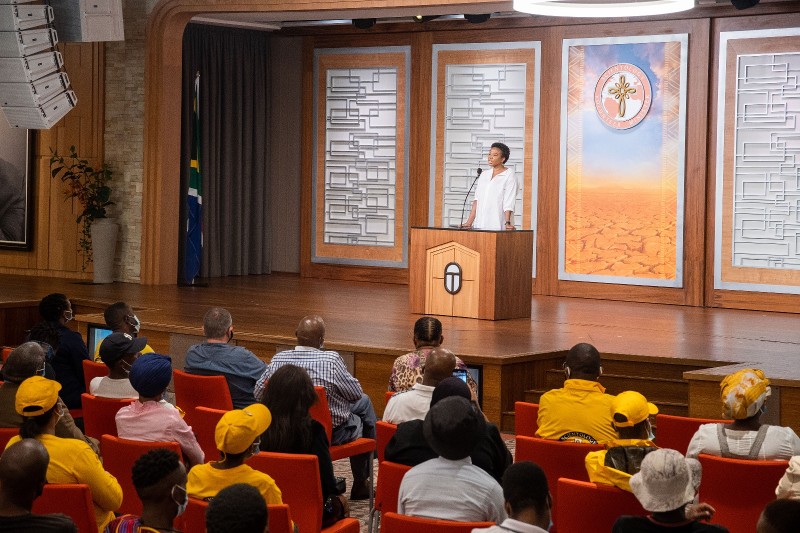 A long list of “Who’s Who” attended. This included the MEC ( Member of the Executive Council ) for Health and MEC for Education of the Office of the Premier of Gauteng. Representatives of the Social Development Department Gauteng also attended. So did officials of the Department of Justice of Gauteng. South African Local Government Association (SALGA) was also on hand, along with National Disaster Management. The Chief of Police of the Tshwane Metro Police, and Emergency Services of Tshwane, Joburg and Ekurhuleni were also there. And representative of Mogale City and many police officers of Gauteng attended as well.

Where would we be without you?

Comments included,  “We can’t possibly figure out where we would have been without you. It is just indescribable.” “We have never seen anything like that before.” “You are the defender of the people,” said the Lieutenant-General of the Tshwane Metro Police.

The MEC of Health Gauteng, Dr. Nomathemba Mokgethi, and the MEC of Education, Mr. Panyaza Lesufi, thanked two Scientology Volunteer Ministers in particular who have been part of the volunteer force since the lockdown hit the country in 2020. They each contributed more than 2,000 hours of service to the community.

Each of the volunteers present contributed minimally 100 hours, many of them between 1,000 and 2,000 hours.

A special acknowledgment to the Church of Scientology

Mr. Freddy Williams of the Tshwane Emergency Services presented a special acknowledgment to the Church of Scientology.  Since the pandemic began, the Church has organized and coordinated these volunteers and contributed tens of millions to combat the deadly virus in the country. Scientology Volunteer Minister South Africa spokesperson Sandile Hlayisi accepted the award, crediting Scientology Founder L. Ron Hubbard for the program, the technology, and the passion to help South Africa.

“My life has become so much better.”

One volunteer shared how studying the Scientology Tools for Life and becoming a Volunteer Minister has changed his life.

The man started volunteering shortly after the lockdown began. “Viva Scientology! Viva!” he said. “Since I studied the Tools for Life courses, my life has become so much better.” Before that, he considered his life to be “ordinary” at best. But since then, his life has improved in so many ways in addition to the satisfaction and pride he feels from the volunteer work he has done. “Now, I am getting married. And I have now also become a businessman.” He said it was not just a matter of reading the material in the courses or receiving a certificate that made the difference. No. Using the tools is what changed everything for him.  “The same could happen for anyone,” he said, “if they really start to apply those tools as well.”

Mr. William Molotsi, Chief of Staff Mogale City, said, “You were the first people to come to Mogale City and you volunteered your services to the entire municipality. So we say thank you! And we want to continue our journey with you. For us, this is a friendship and a friendship that we want to expand. You are my role model.”

Over the past 28 months, Scientology Volunteer Ministers have dedicated more than a million hours to assist the government and private sector to care for the most vulnerable and to ensure those providing vital functions could do so without distraction or concern.

Mr. Hubbard described a Volunteer Minister as “a person who helps his fellow man on a volunteer basis by restoring purpose, truth and spiritual values to the lives of others.” Their creed: “A Volunteer Minister does not shut his eyes to the pain, evil and injustice of existence. Rather, he is trained to handle these things and help others achieve relief from them and new personal strength as well.”

Their motto is no matter the circumstances, “Something can be done about it.”

Castle Kyalami serves as a home for the community and a nexus for all who share the goal of bettering the lives of individuals and strengthening communities across the region, nation and all of Africa. Mr. David Miscavige, ecclesiastical leader of the Scientology religion, dedicated Kyalami Castle on New Year’s Day 2019, reaffirming the commitment of Mr. Hubbard that “from Southern Africa will spring the next great civilization on this planet.”

August 1, 2022
Sharing the Scientology How to Stay Well Campaign Throughout Taiwan in the Name of Help
Next Post

August 4, 2022 What Mainline Media Fail to Report About al-Zawahiri, from Freedom Magazine, Voice of the Church of Scientology
Browse Our Archives
Related posts from Scientology Beliefs