A Sovereign Pope Would Do Things My Way & Other Quick Takes: 7QT XVII Seriatim

Yesterday marked the pope’s first full year in office. Good job, Pope Francis. In one full year, the number of doctrines you changed was zero.

Still, and no surprise, the fringe was out, hand-wringing and sniping. On one blog, I read that the pope we should have had would have been “a father and a sovereign.” But instead of a sovereign, we got a pope who obstinately decided to “do things his way.”

That explains it. A sovereign never does things his way; he does things my way. I mean, who does this Francis think he is? The pope?

As I recall, the Jews wanted their Messiah to be an earthly sovereign too. Instead, they found themselves saying, “Isn’t this the carpenter’s son?”

In truth, I think we have our father. I think we also have some children who refuse to listen to papa, because they think they know better than he.

A reader writes to ask for citations from St. Augustine and St. Thomas Aquinas regarding their belief that the gift of tongues has ceased. I had made reference to their views, a few weeks ago, in this post. For any others who are wondering themselves, here are the references.

St. Augustine writes on the subject in “Ten Homilies on the First Epistle of John,” VI, 10; here.

In the earliest time the Holy Ghost fell upon them that believed; and they spoke with tongues which they had not learned “as the spirit gave them utterance.” These were signs adapted to the time. For it was proper for the Holy Spirit to evidence Himself in all tongues, and to show that the Gospel of God had come to all languages over the whole earth. The thing was done for an authentication, and it passed away.

Augustine and Aquinas both understood that to talk in tongues meant nothing more than to talk in known foreign languages. There is no more need for tongues because there are already Christians in every nation, speaking every language.

Some observations about comboxes. I have heard several other bloggers say that they should be eliminated altogether, on the belief that nothing constructive or useful is ever said there. In response to a weekend of vitriol, the National So-Called Catholic Reporter chose no longer to allow comments. Deacon Greg Kandra has not allowed them on his blog in some time.

Bloggers faced with such realities have four options: (1) allow anarchy to reign; (2) moderate all comments, at a significant loss of their own time; (3) use customized moderation (forcing users to register so that abusers can be banned and trusted folks whitelisted, shutting down comments on posts that are more than so many days old, having heavier or lighter moderation depending on the nature of the post, and so on); (4) eliminate comments altogether.

For now, I have chosen option 2, and I have very simple rules of engagement: (1) be respectful; (2) be on topic; (3) don’t be a jackass. Since my blog (thus far) has been light with comments, that makes sense.

Now, what happened is, last week I wrote a post that went viral on Facebook. You may notice that there are 100 comments on that post. A lot more than that were submitted to my moderation queue, and I spent a great deal of time reading and deleting. It was the first time I ever refused to post a comment, and I refused a lot. I suspect the psychology is that such people submit the comment, knowing I won’t post it, but also knowing that I’ll have to read it first.

That is fine. I see no reason, for now, to change the way I manage comments. I’ll only add (because I saw it a lot) that being a jackass includes things like attacking Mark Shea and Simcha Fisher. If you include that in your comment, and think, “I hope he publishes this,” you’re an idiot. I don’t know how else to say it. Comboxes can serve a valuable function in generating discussion on important topics. But there are very few bloggers, who write on the kind of topics I do, who don’t ask themselves from time to time whether (for the sake of peace of mind and time) to eliminate comments altogether. I consider that a last option, but depending on what happens on this blog in the future, you might see changes in how I manage comments.

I am curious. If you are a blogger, and you use WordPress, how many of you write your posts in the visual editor, or how many write them entirely in HTML in the text editor? As I have grown more comfortable with HTML over the past fourteen months, I now write my posts entirely in HTML. It gives me more control. I don’t think I’d know how to use the toolbar any more if I wanted to.

Earlier this week, the New York Daily News reported that a 47-year-old British woman, Amanda Rodgers, has married her female dog. The dog’s name is Sheba. You know that word that’s used to describe a female dog? Well, Ms. Rodgers proudly uses that word to describe herself, not the dog. “I am Sheba’s”—yes, that word—she says.

This is not a case where rational argument about natural law will do much good. The woman needs therapy. It is bad enough to be insane, but it is still worse to live in a culture that treats your insanity as though it is just another lifestyle choice.

And in case you have not seen it, here is a touching story of the true meaning of marriage, and permanence, and love. It stars a World War II hero, and the widow who waited 68 years to find out what happened to him.

In addition to all the comments I got on my Latin Mass Onlyism post, I have also had a huge upsurge in e-mails from readers. I deeply appreciate all of them, and all the kind words; and if you are reading this please know that I am working to get through them all and reply back to you.

Read more of this week’s quick takes at Conversion Diary. 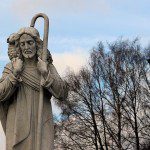 March 11, 2014
Good Shepherd No Different Than Fisher More
Next Post 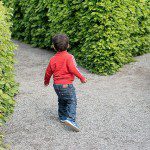 March 18, 2014 The Protestant's Dilemma by Devin Rose: A Review
Browse Our Archives
Related posts from To Give a Defense