Infallibility is true, but (almost) useless. With some words about St. Maria Goretti.

Back in 2015 I wrote an article for Epic Pew on the topic of what infallibility does not mean. I pointed out there that the only real reason for the Church to have a definition of infallibility is to “to distinguish between levels of epistemological certainty and between what is divine revelation and what is not.” It still seems to me that’s true. The definition out of Vatican I possibly is of use to theologians and apologists. But it’s almost useless for anyone else and creates at least as many problems as it solves. It’s a very, very, very limited definition:

We teach and define that it is a dogma Divinely revealed that the Roman pontiff when he speaks ex cathedra, that is when in discharge of the office of pastor and doctor of all Christians, by virtue of his supreme Apostolic authority, he defines a doctrine regarding faith or morals to be held by the universal Church, by the Divine assistance promised to him in Blessed Peter, is possessed of that infallibility with which the Divine Redeemer willed that his Church should be endowed in defining doctrine regarding faith or morals, and that therefore such definitions of the Roman pontiff are of themselves, and not from the consent of the Church, irreformable.

So the pope must

Those are strict limits.

Some Protestant apologists like to complain that it’s so limited one can never know what’s infallible or what is not. But that’s not really the problem. The Assumption is an infallible dogma because it meets the criteria of Vatican I. So does St. John Paul II’s teaching that women may not be ordained. No, the real problems are different.

Here’s one. Too many Catholics use infallibility as a license to reject what they don’t like. If it’s not infallible, I can defy that. But the Church tells us we have no such liberty. The Catechism distinguishes between the infallible Magisterium and the ordinary Magisterium but says that Catholics must still give “religious assent” to the latter. Lumen Gentium, the Profession of Faith, and Canon Law all repeat this teaching.

Here is a second. Too many people imagine that infallibility means nothing in the Church can change. They treat Church teachings or traditions as though they are museum pieces and must be kept in protective glass. It is not thus. The Church may grow in its understanding even of its infallible teachings, such as the Eucharist being the body and blood of Jesus Christ. So when change occurs before our eyes, there are those who panic and speak of crisis. But infallibility is not meant to force the Magisterium into an old wineskin. This is why the Magisterium is living.

And here is a third. Too many people think infallibility or “religious submission” means that Catholics may never question or struggle in public with things the Church has said. This is particularly insidious because it’s a way of shaming a person for thinking, and it also prevents the Church from deepening in its understanding of what it says. If one could never speak publicly of doubt and struggle, there would never be development of doctrine.

For these reasons, I think it’s more important to ask “is that authoritative?” (and just as importantly “in what way?”) than “is that infallible and am I free to reject it? if I like it may I use it as a cudgel against those people?” Asking whether or not something is infallible is just about pointless. There’s always an agenda behind it—almost always.

Which brings me to St. Maria Goretti. Every year on her feast day (July 6), a war opens up between those who say she was a “martyr to chastity” and those who reject this expression. (St. Maria died resisting rape.) Those who reject the words “martyr to chastity” cite the fact that Goretti forgave her attacker. Her forgiveness led Alessandro Serenelli (years later) to repent. Her ability to forgive is a greater sign of holiness than resisting an attack, which is more on the level of human instinct.

Those who defend “martyr to chastity” cite Pius XII’s words when he canonized her. Pius XII called her a “sweet little martyr of purity.” Later, Pope John Paul II said of St. Maria:

She chose death when there was no other way to defend her virginal purity. Maria Goretti’s blood, shed in a sacrifice of total fidelity to God, reminds us that we are also called to offer ourselves to the Father. We are called to fulfill the divine will in order to be found holy and pleasing in His sight.

So see? The popes say it; the Church says it! You can’t argue against that! And—and—and—the entrance antiphonal for St. Maria’s memorial says: “Behold, now she follows the Lamb who was crucified for us, powerful in virginity, modesty her offering, a sacrifice on the altar of chastity.” So you see?

A few points. (By the way, St. John Paul II was writing an article for Osservatore Romano, and popes don’t speak as the teacher of the Church when they do that kind of thing.) Rationales for a canonization are not of themselves infallible, or even authoritative. The canonization is, but not the “why” of it. The canonization is infallible insofar as it is a statement that the person is in heaven and we may ask her to intercede for us. That’s it. Catholics don’t even need to care for Maria Goretti all that much or have any devotion to her at all. That’s true for any other saint. It’s no different than the fact that some Catholics are my friends and others I could care less about or dislike with vehemence. I could, for example, listen to someone—even if it’s the pope—laud and magnify Joe J. Jerkowitz and think, “What a crock.” I’m hearing the pope’s opinion of a person. It’s not infallible, and it’s not even a teaching.

And there are any number of problems with the idea that St. Maria Goretti is a “martyr to chastity.” But I’m going to single out one, and that’s this: You can only be a martyr to something if it’s at stake. Your chastity is never at stake when you’re about to be raped. Never. If Maria had never succeded in fighting off Alessandro—if he had raped her—she would still have been chaste. End stop. Victims are not guilty of a sin against chastity, nor do they lose their chastity.

Fighting off an attacker is an instinct, not a sign of holiness. A person actually has to make an effort to not resist. But forgiveness of someone who’s attacking you and murdering you? That does require a great deal of holiness.

But Alt! You just said that even if a teaching’s not infallible, it’s still authoritative and Catholics may not reject it. So why are you saying “but that’s not infallible” here?

Except that “Maria Goretti is a martyr to chastity” is not a teaching of the Church at all. What is a teaching is that chastity is a virtue, and lack of chastity is a sin. But the idea that she died a “martyr to chastity” is an opinion of a person and an opinion about the meaning of a death. Catholics are not bound to opinions, not even the pope’s opinions. It’s a divine revelation that Maria Goretti is in heaven. It is not a divine revelation what her death means. The Church can’t bind us to make any particular sense of a saint’s death. We may question and argue about this.

A few years ago there was a story that Pope Benedict XVI had expressed some doubts about Humanae Vitae, and the nuance of it is important:

In a new book published in Italy Friday, the retired pontiff says that while he agreed with the conclusions Paul drew in the encyclical Humanae Vitae he had trouble with the argumentation.

“In the situation I was then in, and in the context of theological thinking in which I stood, Humanae Vitae was a difficult text for me,” Benedict says in the book, to be published in the U.S. Nov. 3 by Bloomsbury under the title Last Testament: In His Own Words.

“It was certainly clear that what it said was essentially valid, but the reasoning, for us at that time, and for me too, was not satisfactory,” Benedict states. 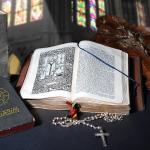 July 6, 2019
Does the Mass "banish the remembrance of Christ's death"? Part 3 of a series on John Calvin's Institutes IV.18.
Next Post 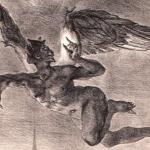 July 8, 2019 Taylor Marshall says: Listen to the demons!
Recent Comments
0 | Leave a Comment
Browse Our Archives
Related posts from To Give a Defense