This week Fred Sanders posted a link to a meditation on Barth and the experience of doubt in the life of a Christian, and especially of a theologian. The article deals with two forms of Christian doubt, one innocuous, one dangerous, but both negative. While this post rightly identifies two ways doubt can go wrong, any student of Pascal will argue that there’s also a way that doubt can go right, acting as a corrective for presumption and pride in the life of a believer.

Barth divides the experience of doubt into two types, which I’ll call intellectual and existential doubt. In the first case, a theologian, because he’s doing analytical (pick apart-y) work on Christian doctrines, reaches a moment where he’s pulled his theology to pieces and isn’t sure how the pieces go back together again. This kind of doubt, Barth says, isn’t something to worry about. It’s a natural consequence of analytical work, and provided we don’t “slack” and fail to put the pieces back together again, we’ll be fine.

When I hear this description, it reminds me of Descartes’ Meditations. Descartes decided that in order to do find out which things he knew for sure, he would take the machete of doubt to all his beliefs, and see which ones were so solid that no amount of doubt could hack them away. In short, Descartes and Barth believed that doubt is a part of analyzing well.

A person who never entertains doubts, even about her most closely held beliefs, cannot really be said to be believing them well. This is why whenever I teach Hume’s Enquiry to my students, I try to make them worried about even the simplest relationships of cause and effect. One of my jobs as a teacher is to move beliefs from the “unreflectively accepted” category to the “thoughtfully concluded” category, as Dewey would have it. A student can only properly believe that there are laws of cause and effect once he has seriously wondered for a moment why he thinks the pen will fall the next time I let go of it.

Barth’s second, existential, doubt occurs when the theologian starts to wonder whether theology is worth doing at all, a doubt that seems more akin to despair than uncertainty. This despair might occur as he becomes overwhelmed with the problems of the world or the brokenness of the church on earth. It also might occur because the theologian is experiencing a disconnect in his personal life, either performing a faith he doesn’t believe, or devoting himself to theology to the point that he is no longer living in the world.

Barth argues that this kind of existential doubt is wholly negative, only, always the work of Satan. This is interesting, given that Barth also advises every theologian to expect exactly this kind of attack. God does not create doubt in the life of the believer, but in every believer—especially every theologian—God allows the satanic temptation to doubt. Again, this message applies to a broader audience. One thing the church has been doing a better job of recently is teaching Christians to expect experiences of doubt.

One thing the church has perhaps been doing poorly, Barth notes, is mistaking confidence for shallowness, and doubt for depth. Kierkegaard talks about this kind of attitude in the introduction to Fear and Trembling, the assumption that doubting is the first step to being a real intellectual. Kierkegaard spends the rest of the book firing back a different message – it’s not doubting faith that’s deep, it’s believing in it. The kind of constant reverent faith we associate with grandmothers isn’t simple, Kierkegaard argues; it’s the hardest thing in the world. Rather than despising it and glorifying our doubts we should stand in awe and wonder at the greatness of that real thing, faith, when we see it.

So, for Barth doubt can be an intellectual tool for examining beliefs carefully, in which case it’s useful. Otherwise, it is an attitude of hopelessness in the light of communal failings or personal hypocrisy, in which case it’s dangerous, especially if the doubter finds her own doubts impressive. I want to suggest that there’s a third type of doubt not mentioned by Barth. This is a type of existential doubt not founded in hypocrisy or despair, but in an accurate understanding of human fallenness, and if used correctly, this doubt can lead us further into knowing God and ourselves.

For Pascal the first rule of human thought or behavior is that we are not what we were meant to be. God did not create us to live lives shrouded by doubt, but sin has distorted even the faculties that give us knowledge. That means that understanding who I am according to the Christian story means understanding that I am, fundamentally, fallible. I know that my desires can distort the way I see the world. I know that my reason can become prideful and dogmatic, and lead me into error. So for Pascal, and here he echoes Augustine, doubting myself is sometimes just good common sense. It’s thinking rightly about my own limitations in light of the distorting effects of sin.

This third type of doubt, if used correctly, can result in two fundamentally Christian virtues: humility and hope. Humility, because I understand that without God redeeming even my reason and my senses, I am always in danger of being deceived and deceiving myself. It’s easy as a Christian intellectual to think that I can secure my faith by constructing a perfect system of proofs and arguments, but ultimately my faith is dependent on God’s faithfulness rather than my cleverness. The right kind of doubt reminds me of this. Secondly, as long as I remember that I need God to know truth, not just generally but at every moment, I can feel firm hope. Because I hope in God, even my doubts lead me to trust him more fully, to recognize my dependence on him, and to believe that through him I am coming to know fully, even as I am fully known. 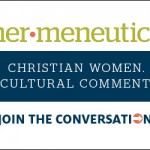