For the next several months a group of writers focused on the issues of boys and men are collaborating through the writing and sharing of blog posts in order to bring greater awareness to the unique challenges boys and men face in the 21st Century.  Twice a month these writers will be posting the same posts on their various media formats to spread the word and to introduce their audiences to the great work of their peers.  Today’s post features Dr. Janet Sasson Edgette, psychologist and author of six books on parenting and counseling kids and teenagers, including The Last Boys Picked: Helping Boys Who Don’t Play Sports Survive Bullies and Boyhood (www.janetedgette.com)

By mistaking unchecked behavior for undeveloped behavior, we allow unacceptable behavior in boys and men to be seen as just another part of “being a guy.” 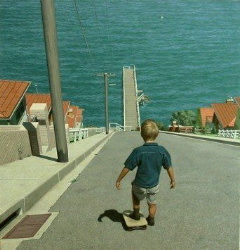 Years ago I knew a mother who had eight kids, the last six of whom were boys. The brothers were energetic, scrappy kids who were polite and rather likable when outside of the home. But inside? Well, let’s just say they fed off each other’s impish troublemaking and made watching over them a virtual nightmare.

This mom believed firmly in teaching kids to be good citizens of their home. Yet she remained unusually accepting of her sons’ casual avoidance of responsibility and their indifference to how their behavior affected the family. “I don’t know what it is with boys and their socks . . .” she’d say, or, “I don’t know why they have to bother their sisters so much whenever it’s time for bed.” I always got the feeling that she spent her evenings picking up stray socks and plates and nipping at her sons’ heels like a border collie, herding them through their showers and into their beds, thinking to herself something along the lines of, They sure run me ragged, these guys, but I guess that’s what boys do.

In most cultures around the world, boys do seem to enjoy a reputation for doing rascally, mischievous things that amuse grown-ups and make them think, Well, there’s a boy for you! It’s gotten to the point where some parents believe the “masculine spirit” is actually endangered if boys are socialized at too early an age. Under the doctrine of “letting boys be boys,” these parents wait too long to teach their sons the difference between being loud and rambunctious, and being loud and rambunctious at times or in places when it bothers other people. They wait too long to teach their sons that being competitive, even aggressively so, is terrific but that it should never become an excuse to make someone else feel diminished. Sometimes, they wait too long to teach their sons that circumspection, empathy, and kindness are not exclusively feminine qualities.

Years ago, author and feminist-critic Christina Hoff Sommers warned us about the dangers of failing to see the difference between boys, and boys who behave badly.  She pointed out that when we don’t take the time to differentiate between the two, we leave room for things like aggressive behavior or personal rights violations to be understood as a natural part of being male, rather than as a red flag. We stop short of looking for other reasons why a boy might be reckless or combative or uncharitable, such as upbringing, emotional problems, socioeconomic factors, or the particular mythology surrounding masculinity to which his parents subscribe.

I recently heard about a study showing that in the United States, girls three to six years of age have a much better ability to regulate their emotions and their behaviors than boys of the same age. Interestingly, this gender difference in self-regulation wasn’t found in any of the three Asian cultures included in the study. The lead author’s take-away was that here in the US, we expect girls to be more self-regulated than boys. Mine is the flip side of the coin: that in the US we don’t expect and therefore don’t teach boys to be as self-regulated as girls. And so—surprise—they’re not. I think it’s not unlike what happens with our teenagers, who don’t really have to be or even want to be all that moody and defiant. It’s just that somewhere along the line, adolescent “Sturm und Drang” morphed from a bio-physiological susceptibility into an assertive, self-fulfilling prophecy-disguised-as-developmental-theory lulling parents into complacency about their teen’s less-than-becoming behaviors. We’ve come to believe they’re hard-wired to act that way, but no—they go there because we let them.

Taken as a group I believe it’s fair to say that boys will always demonstrate more over-the-top, risk-taking, trash-talking behavior than will girls. But respecting the differences between genders shouldn’t mean we offer up exemptions to boys from behaving well. I can see how it might be physically or emotionally harder for a lot of young boys to keep their aggressive or competitive urges in check than it is for young girls, but it doesn’t mean we don’t ask them to do it. It means we help them do it by steadily encouraging and supporting their ability to exert control over their actions, and by getting them to see those actions as a function of the choices they’re making rather than as behaviors they can’t curb.

The “boy as lovable scamp” is an appealing abstraction of young masculinity, but it’s also a seductive one. It dresses up a regressed edition of a male and marches it around as something to be adored. The problem is, little boys with a puckish sense of humor often are adorable; it’s part of what makes the slope between boy behavior and bad behavior so darn slippery.

But with the bigger boys come bigger problems. The romantic veil that gets placed over the careless behavior of young boys can mask more serious transgressions later on, when these young boys become young men. The shrewd ones take advantage of this all the time, oscillating between charismatic confidence and a waggish charm for the audience of females they hope to disarm, and then seduce. This bad-boy-as-sexy-boy creates problems not only for the girls who end up taking these boys at face value, but for the “good” boys too, who, by comparison, come off as lacking in mystery or menace and, in the end, are desexualized.

The wish to protect children from early and unseasonable stress is a longstanding American tradition and many American parents consider it their right. However, when it ushers parents and educators away from holding children accountable for behavior that they could, in fact, control, such protection becomes a disservice. In addition, it communicates the unfortunate message that accountability is something to accept only when it can no longer be avoided. Otherwise, why such resistance to it? I find that an interesting but sad subtext to this conversation about the socialization of young children, because I think what kids need from us is the message that being in control of one’s emotions, actions, and reactions is something that truly empowers. It feels good, not restrictive or burdensome. People who live their days at the mercy of their emotions aren’t happy. They don’t feel free. Things happen to them and they don’t understand why. When we instead help our boys—including our very young ones—gain a sense of mastery over their bodies, and develop an awareness of the impact of their behavior on those around them, we offer them a leg up on the challenges they’ll face in life, and contribute to the raising of great boys who, later on, become great men.

March 7, 2014
Finally: Unmasking the Ultimate Culprit Behind the Boy Crisis
Next Post

March 27, 2014 Putting the "Boy" Back Into Boyhood
Recent Comments
6 Comments | Leave a Comment
"This is a fascinating idea. Having raised boys and a girl, I can promise you ..."
ckahrl It’s Been 50 Years Since a ..."
"Um, Jesus is already famous. This reminds me of the whole "Good News" Christian trope. ..."
Adam King The Purpose of Boys: A Podcast ..."
"So Jesus needs our help in the Name Recognition area? Really???? If he did, he ..."
Jezebel'sOlderSister The Purpose of Boys: A Podcast ..."
"Apparently men also make unevidenced generalizations based on outdated stereotypes."
Adam King Bathrooms, Male Stereotypes, and Granddaughters
Browse Our Archives
get the latest from
Evangelical
Sign up for our newsletter
POPULAR AT PATHEOS Evangelical
1