Dual and multi-faith practice can also bring up questions of membership and identity.

Many people identify as being of a particular religion; but what constitutes membership?  In Christianity, the boundary between membership and identity is fairly blurred – it could be measured by attendance, baptism, belief, or adherence to the Nicene Creed.  Traditionally, Christianity has expected a clearly demarcated religious identity (Thurston, 1994: 177).   In Paganism, identity and membership of the community are largely negotiated at festivals, which people attend both to discover the self and to develop the self (Griffin, 2001: 499).

Peter Chapin-Bishop (2007) is clear that membership in a tradition consists of having received divine communication in that setting.  Liz Opp (2007) writes that identity is a sense of one’s personal values being close to the group identified with, whereas membership is participation in that group, its norms, values and social life.  She adds that identity is the ground of a person’s being, and may come into conflict with membership of a group.  In her formulation, identity seems more important than membership, which might suggest that she is advocating a subjective-life approach rather than a life-as approach; but she also talks about experiencing an inner call.  There is clearly a subtle balance between membership and identity whenever people participate in a group.  Perhaps people join groups because they admire the values of those groups and want to become more like those who are in them.  Perhaps people join because they admire the practices of the group, but then find that the values are different to what they are expecting, or that they are expected to transform their own identity, values and insights to conform with that of the group and its traditions to a degree which violates their identity.  Either way, the formation of a person’s identity happens in a social context (Edwards, 2005: 116), and groups that someone becomes involved in will reflect that identity.

The issue of membership and identity is important in any discussion of a dual or multi-faith practice.  A person may identify with a group, but if the membership requirements of that group are that its members do not belong to other groups perceived to be in conflict with its values or beliefs, can that person be said to be a member of the group?  It could be argued that if a person identifies with a group, the criteria of membership need to expand to include that person; on the other hand, it might be held that the person has to adjust to the mores of the group in order to belong.  However, if the practices of the group contradict its stated ideals and values, perhaps the newcomer is the very person best placed to call attention to that contradiction, since they are bringing a fresh perspective.

The process of “conversion” (a rather loaded term) often plays a part in a change of religious allegiance.  However, if the person finds truth in both their new group and their previous group, and the old group emphasises one thing that the person finds worth in, and the new group another thing, it will be difficult for the person to make a choice to leave the old group and join the new group; indeed, such a choice may not even be considered (C. Chapin-Bishop, 2007).

Lewis Rambo’s (2000) model of conversion is more complex than the “road to Damascus” experience that most people think of when they think about conversion. In phase one, he says, people go through some kind of crisis (which could be dissatisfaction with their current belief system, or a mystical experience). In phase two, they go on a quest to find something that fits their new model of the world. The third phase involves interaction (learning how to do their chosen religious practice). The fourth phase is commitment (“rituals that create a new identity, a new set of relationships, a new set of roles that lead to a new and different kind of life”), and the fifth stage is consequences – the transformation effected by the commitment (which could be lifelong development in the chosen faith, or it could be disillusionment and going back to phase one).

In the case of dual or multi-faith practice, the conversion process may be experienced as an expansion of understanding, rather than a change of direction.  Michelle Guinness (1994: 15), who was brought up Jewish, read the “forbidden bit” of the Bible and decided that Jesus was the Messiah – but when she became a Christian, she introduced many Jewish ideas and practices to her family and her church, feeling incomplete without the Jewish side of herself.  The contrast between the life-affirming Judaism she grew up in and the asceticism of the Christianity she joined was too great; she had to find a compromise.

Cat Chapin-Bishop’s crisis moment was the destruction by terrorists of the World Trade Centre in 2001, when she “knew in my body as well as my mind that deep and absolute conviction that war was just not the answer for anything”. However, the crisis was an occasion for the expansion of her worldview, not a change of direction; she says, “I am still Pagan–my love for the earth and the Old Gods does not change. But other Quaker testimonies and practices have grown in me, about oaths, clergy, simplicity… and they have changed how I worship, if not what or why.”  The quest phase was very short (between 11 September and 12 October), and the commitment phase began when she sought formal membership of the Religious Society of Friends.  The consequences are still being worked out in the internal dialogue of the two faiths.

Christianity and Buddhism have sought to privilege external revelations over the subjective promptings of the body and the inner life (Corless, 1994: 181); Paganisms and Judaism seek to integrate the life of mind, body and spirit by following the round of seasonal festivals (Harvey, 1997: 223).  When someone who follows inner promptings engages in dialogue with someone who follows an external authority such as a tradition or a book, the result is usually mutual incomprehension (King, 1994).  Those who experience an inner guide often relate it to an external entity which can also be found in the depths of the self (Harvey, 1997: 212).

This article was originally published in the Unitarian journal, Faith and Freedom. 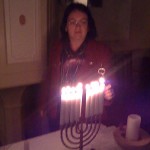 January 22, 2013 Dual-faith practice (part 4 of 4)
Recent Comments
180 Comments | Leave a Comment
Browse Our Archives
get the latest from
Pagan
Sign up for our newsletter
POPULAR AT PATHEOS Pagan
1

5 Ways to Get Off of...
John Beckett
Related posts from Dowsing for Divinity