Theology Is Not Religious Studies

So, let’s revisit: What is theology, particularly in a Pagan context? While I love definitions, I am never content with just one. Let’s look at some definitions from scholarly Pagans.

Yvonne Aburrow defines theology as “reasoning about the Divine… involv[ing] dialogue between different schools of thought. It can include skepticism and non-theism. It does not lay down dogma or doctrine, but is exploratory.”

Sam Webster says that “Theology is God-talk” and “Theology in practice is the engagement with meaning and values with respect to that which we consider the Divine.”

My preferred short definition of theology is “a vocabulary and a framework for thinking about spiritual issues,” although I’ve also defined it elsewhere as “an investigation of the nature of Deity, deities, and divinity; an intellectual framework for religious belief and practice; an organized expression of the meaning of numinous or sacred experiences.”

Theology, by definition, is written by insiders: practitioners of a religion who are articulating their personal religious or spiritual convictions within a like-minded community. These religious convictions are, at their root, unverifiable. Though practitioners may have experiences that support their commitments or beliefs, theology includes issues (such as the nature or existence of deity) that cannot be explored with concrete evidence.

Religious studies is different in a number of ways. Religious studies can be (and often is) written by people who are at least partially “insiders” (in other words, they practice that religion or are at least sympathetic to it). But religious studies scholarship is written to specifically include readers who are “outsiders,” those who have no previous knowledge of or investment in the tradition. Theology assumes a certain baseline of shared beliefs, attitudes, or practices that cannot be completely demonstrated with reason. Religious studies, for the most part, only assumes that the audience is open to being logically persuaded by evidence.

Briefly, then, religious studies is the academic study of religion, in which scholars use evidence from authoritative texts, history, ethnographic or statistical studies, and other concrete sources to make logical arguments. In religious studies, the arguments made about a given religion are designed to convince readers who do not practice that religion. Whether or not a religious studies text is written by an “insider” or an “outsider” (and this is a spectrum, not a black-and-white distinction!), the intended audience always explicitly includes “outsiders” to that religion.

When people are trying to read or write religious studies or theology without understanding the difference between the two, things get sticky. For example, I once co-taught a class on the Bible as literature. Our primary goal for that class was to help students read the Bible as if they had never encountered it before. (Some hadn’t — and in most ways, that was an advantage.) We wanted them to encounter the text, learn about its historical context, and then learn to interpret it using historical evidence and direct quotations.

The students who struggled most in that class were those who had been drilled in confessional (“insider,” or “believer”) biblical interpretation. For eighteen years or more, they had been taught to approach the subject of religion through the theological lens of a particular tradition. Although that lens was probably useful and precious to them as religious practitioners, it was useless for actually reading the words on the page.

One student, I recall, submitted a paper analyzing the Genesis story of the Fall, in which she repeatedly referred to the snake in the garden as “Satan.” When it was pointed out to her that the words “Satan” and “devil” do not appear in the story — in fact, that the text never identifies that entity as anything more than an ordinary snake — she was speechless with confusion. Her church’s theology was such an accustomed lens for approaching the world that she wasn’t even aware it was there. Rather than an interpretive tool, it was simply reality.

It’s possible to make arguments about religious stories without resorting to received dogma. For example, my student could have argued that the snake hurt Eve and Adam by damaging their relationship with God, which they valued: Genesis has evidence that supports that argument. She could even have gone to other parts of the Bible to try to show similarities between the snake and Satan. But because she assumed that the snake *was* the angel called Satan without giving evidence for that connection, her argument was not convincing to anyone who didn’t already share her beliefs.

Unfortunately, even within the much more theologically flexible Pagan community, we encounter similar problems. Pagans sometimes read religious studies books as if they were making theological claims, rather than describing one possible theory about a collection of facts. In some cases, academic historical theories are even read as morality tales on which we should base our lives. Stories of a pacifistic, matriarchal prehistory and of the intact survival of a fully-functioning European indigenous religion, though originally presented in a religious studies framework, have become the basis of new, dogmatic theologies. These theologies, in turn, have led to the widespread misunderstanding of religious studies scholarship, because they are based on inflexible personal convictions rather than openness to new research and evidence.

Sometimes theological readings of religious studies happen because scholars’ personal convictions color their work. Today, it’s accepted that everyone has biases, and the important thing is to identify them openly so the reader can take that bias into account. But in other cases, Pagans and other religious people have misread religious studies scholarship that was never intended as theology. Religious studies constructs theories based on evidence that can verified by others (such as text, historical artifacts, interview data, etc.). Although theology may use this kind of evidence as well, at the root of theology is always personal conviction — a religious commitment that drives the practitioner to passionately advocate for an ultimately unverifiable point of view.

Theology can and should involve logic. Ultimately, however, logic is only a means: theology is religious conviction supported and shaped by reason. Religious studies, on the other hand, must always let reason win. 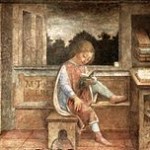 January 5, 2013 Maps and signposts on the journey
Recent Comments
171 Comments | Leave a Comment
"Very well said!"
Ivan Matthews Theology Is Not Religious Studies
"Yes it's very cool that it exists but it's not the only book on the ..."
yewtree Review of Queer Paganism by Jo ..."
"Cool that this exists"
James Review of Queer Paganism by Jo ..."
"Yes, Liz is a friend of mine.I think you need a manual and works of ..."
yewtree Imagining Other Possible Worlds
Browse Our Archives
Related posts from Dowsing for Divinity