Entering the Hall of the Heathens

Entering the Hall of the Heathens May 22, 2014 Sarah Sadie

They eye me warily. It’s a crowded room, filled with the presence of the living in t-shirts or traditional costume, and the shades of the ancestral dead in their own garb, all ranged together along tables and benches. A TV broadcasts the game up in the corner, silent and flickering. I close the door, moving to the fireplace at the far end. I don’t know anyone.

You’re not Asatru. Not Heathen. Not one of us.

No. Maybe not. But I would stay awhile, as guest, if I may.
You value hospitality, I think? It’s cold out there tonight.

A murmur of distrust, but it’s true. Their code of hospitality gives me opportunity to pause here with them a while, to bear witness to their lore and stories, and share my own, and maybe also share a drink or two, if I’m lucky.

What is it to be approached by the voice and figure of a god of a religion not your own? Revelation? Delusion? Conversion…or merely conversation?

Whatever you call it, however you understand it, this was not looked for. I was haunted for months by a vision of fire. And in the firelight, eyes. Who was this? No one I knew. Theology lives at the pulse point. At the library I began reading through the mythology stacks, systematically, searching.

Hephaestus?  …no. Nothing. No buzz of recognition.

Ptah? (also a maker god, also associated with fire).…no. Still blank. Radio silence except for the sound of the crackling flames, and a low chuckle.

My breakthrough came thanks to Facebook. A friend on my feed linked to an article about Paul MacDonald, a swordsmith in Edinburgh looking to take on two apprentices. An internationally known smith, McDonald’s crafted swords for traditional martial artists, but also replica swords from the movies The Highlander, The Princess Bride and, possibly best of all, the He-Man movie and I was halfway through ordering plane tickets to Edinburgh before I remembered myself. I’m married, with two kids. I have no skills with power tools, no mechanical skills at all, really, and probably not enough upper body strength to lift some of the swords he makes, let alone craft them. Why then did this opportunity feel like an answer?

Moving to Scotland to apprentice myself to a swordsmith made sense on the deepest levels, not on the surface of my life. I looked at the picture on the screen again. I thought of the forge, the fire, the laughing eyes, the location.

Wayland Smith? I asked tentatively, not even remembering why or how I knew the name.

Electricity lifted me an inch off my chair. Wayland indeed.

My sisters laugh, terrified
at how I change, crack
open, change and crack again.
A faulty pot, misfired.
No, no, I say. This
is what human looks like, this
closed-off Northern face,
lost and falling, sky-colored
sidewalks, the angular
scrawk of a lone goose, yawn
of traffic over the drawbridge.

I am not Asatru. If I’m Heathen, I’m an “Eclectic  Heathen” at best –which means to many, I’m not Heathen at all.  My allegiance is to my pen. My faith is in the hand that holds the pen and the spaces that it opens, the shapes it makes. The inky blue line on the page, ribboning left to right, is my winding path, how I hear the questions and how I seek the answers. I am in this place, this space, among these gregarious and generous people because there is a story to be told and it has found me. It starts with a smith god, but where it will end  I don’t yet know.

Following Wayland’s lead, I spend a half day attempting the art of blacksmithing at Shake Rag Alley. I make a hook. One hook. I work for over an hour and still my project is incomplete when we bank the forge fire for lunch. Our teacher admits an experienced smith would turn a hook like that out in five minutes.

When I drive back to Madison, Wayland shows up in the passenger seat.

So what did you learn?

I learned I should stick to writing.

Perhaps true. But what did you learn about hammers?

I glance over. I would have thought Thor would teach me that lesson.

A smile. That’s a different matter. Thor’s hammer is his own, and serves him well.
What did you learn of a smith’s hammer?

Let me think about that.

It’s a pretty steep learning curve, to start blogging in the same season you start exploring a whole new family of religions. I don’t know why exactly, but these are the myths and figures I have to tangle with and I’m still figuring out how to make sure my bio appears at the bottom of this post and get the spacing right and then I go try to learn my Rune for the Day and finally I hop over to Facebook and scan through the polytheist groups I’ve joined and figure out the shorthand slang and the interpersonal politics and I’m not even sure I’ll like mead.

Another riff on the definition of poem:
interruption, not illustration. Poem as hammer
to crack the narrative wide, allow blue
springing wet to the page. Kafka said it best:
the ice-axe to break the seas frozen inside our soul.

I search out Wayland the next morning.
A hammer in the hands of a smith brings transformation.
Transformation comes through fire.
Trust to the materials of this good green earth.

These are three lessons I learned.

Hold to those and you’ll be safe enough. My people trust the hammer’s voice.
You travel under my protection, he tells me. I’m not the biggest God in these parts,
he smiles at his own joke, but I am –respected. You will go safely.

The fire pops and crackles. The TV flickers silently up in the corner. Someone nods to the server to bring me a glass, but no one fills it yet.

Writer, do well by us.

I look around at their faces. Part of me, a young part, wants to say, I will, oh I will! I want them to like me. But—what promises can I make that I can be sure of? Honesty and honor count with these folks. I look back at them, each in turn. 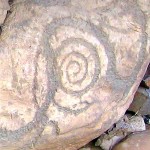 May 26, 2014 Combative Comments Interfere with Readers' Critical Thinking
Recent Comments
197 Comments | Leave a Comment
Browse Our Archives
get the latest from
Pagan
Sign up for our newsletter
POPULAR AT PATHEOS Pagan
1

31 Things To Do Between Now...
Witch, Indeed
Related posts from Dowsing for Divinity

When Is Your Paganism Cultural Appropriation?
It's hard to unpick what is and isn't cultural appropriation but as...
view all Pagan blogs
What Are Your Thoughts?leave a comment
Copyright 2008-2020, Patheos. All rights reserved.