I love Beltane, it is a beautiful festival. The festival of spring, of lovers, of reawakening. The festival of unabashed sexuality, where people dance round a giant flower-bedecked phallic symbol, and leap naked over the Beltane fire, hand in hand with their beloved, or their lover of the moment. Lingering caresses in the woods, under the blossom and the boughs. The firelight playing on ecstatic dancing bodies, lost in the ecstasy of sexual abandon. The contemporary celebration of Beltane seems to have acquired quite a lot of its character from the Roman festival of Floralia (27/28 April), which also celebrated sexual pleasure, as well as flowers.

But spare a thought for those who don’t quite fit into this idyllic picture. What about people who are single? Being single at Beltane is such a downer… hanging around the Beltane fire, hoping that romance will be kindled by the energies of Beltane. Yep, been there, got the T-shirt. What about the widowed?  Those who have loved long and well, and have lost the ones they love? What about the divorced, the abused, and the traumatised? What about asexuals – what are they supposed to do with a festival that harps on and on about sex? And if the focus is mainly or exclusively on cisgender heterosexual lovers, spare a thought for lesbian, gay, bisexual, transgender, and genderqueer people too, and enlarge the focus of the celebration to include same-sex love. What about the frequent portrayal of the God and Goddess of Beltane as white? How about some lovers of colour?   And what about people with disabilities? Other than physical or communication issues, they are no different from the rest of us in their sexual, emotional, and romantic desires.  Beltane, with its themes of excess and wild abandon, can also be difficult for people in recovery, who may feel the need to set boundaries.

This year, I am alone at Beltane. My beloved is 3650 miles away, due to the bureaucratic nightmare of the visa application process. Luckily for us, we can afford flights and administration fees and all the rest of it, and we hope that the situation will be resolved soon. I hope we will be reunited soon, and then it will definitely be Beltane, even if a rather belated one.

I am also very sad because of the number of people who have drowned in the Mediterranean trying to cross from Africa, and angry because their displacement was caused by wars fomented by governments propped up by the West, and angry because so little is being done or planned to save them from drowning. I am gutted because Pinakin Patel, a 33 year old man – a husband – collapsed and died in Yarl’s Wood immigration detention centre on Monday. He was detained there because he and his wife came to England on holiday and the immigration authorities did not believe that they were here on holiday, and carted them off to the detention centre from the airport.

With all this on my mind, it is hard to be all jolly and frolicksome about Beltane. I just can’t manage it. And I don’t suppose for a minute that I am the only one who feels this way. So I give you… Blue Beltane.

I don’t know who it was that came up with the idea of Blue Christmas – an excellent idea, where people who have lost loved ones at Christmas, or who feel excluded in some way from the general jollity of Christmas, can go and sit in a church and quietly share their sorrows.

Well, I feel there needs to be a similar thing at Beltane. Blue Beltane, for people who feel excluded by the general atmosphere of sexual exuberance, for whatever reason they may feel excluded. It might focus on the purificatory aspects of the Beltane fire, as suggested by John Beckett. It might focus on telling each other the stories of why we feel blue at Beltane. It might consist of a ritual to honour the sadness and grief, but gently open us to the possibility of joy – perhaps the walk between two fires suggested by John Beckett would fit this rather well.

One possibility might be building an altar to love, or to the goddesses Flora, Pomona, and/or Maia, or whichever goddesses represent Spring in your tradition. You may want to incorporate a photo of your beloved, or if you are looking for love, something to symbolise your openness to the possibility. (N.B. Love spells directed at a specific person are unethical, because they constrain the will of an individual.)

Another possibility would be to focus on purification and the transition from summer to winter, and moving into a new phase of life. Letting go of attachment to past hurts, and changing perspective. Working through the issues raised by painful experiences, not burying them or denying their importance.

If you are grieving, the grief never entirely diminishes. I read a really helpful thing somewhere, which was the idea that the grief for a lost loved one doesn’t get smaller; rather your soul enlarges to accommodate it.  So I am certainly not suggesting letting go of grief. It is also worth saying that everyone grieves differently. So don’t let anyone else tell you how to grieve, or how long you should grieve.

Of course, Samhain is usually the festival for honouring and connecting with loved ones who have died, so the focus of Beltane should be different, but I think it is no accident that the two festivals are directly opposite each other on the wheel of the year. In a way, they are mirror images of each other. Beltane represents the life force at its strongest, rising to a peak; Samhain represents death. But we cannot have life without death, so in the midst of celebrating the life force, we could also remember that there is a cycle of birth, life, death, and rebirth. Perhaps Samhain is for lingering lovingly with ancestors and the beloved dead, and Beltane is for welcoming new life – but we can still keep the memories of loved ones fresh in our hearts, and remember the happy times we shared with them.

I for one will be lighting a candle for all those whose lives were snuffed out untimely by war, drowning, racism, and injustice, and doing all I can to raise awareness and campaign for a compassionate approach to migration – the movement of people just like you and me, who just want a better life for themselves and their loved ones. 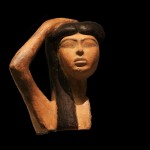 April 27, 2015 A lament
Recent Comments
0 | Leave a Comment
"Very well said!"
Ivan Matthews Theology Is Not Religious Studies
"Yes it's very cool that it exists but it's not the only book on the ..."
yewtree Review of Queer Paganism by Jo ..."
"Cool that this exists"
James Review of Queer Paganism by Jo ..."
"Yes, Liz is a friend of mine.I think you need a manual and works of ..."
yewtree Imagining Other Possible Worlds
Browse Our Archives
Follow Us!

Beyond Binary Witchcraft: Essential Reads for...
Agora
Related posts from Dowsing for Divinity