City of Refuge, by Starhawk (Book Review) May 20, 2016 Christine Kraemer

[Please note: spoilers ahead, especially for the prequel, The Fifth Sacred Thing.] 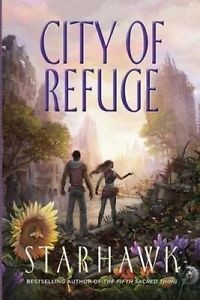 When I bought my copy of City of Refuge, I was trying to have low expectations. I can only imagine that writing a sequel to a well-received, bestselling book like The Fifth Sacred Thing more than twenty years after its initial publication must have been an intimidating task. Would the sequel remain true to the characters we loved the first time around? Would the story still resonate despite changes in our political climate? Would the book simply come off as too idealistic for me—now twenty years older myself—to take it seriously?

Well, I lost a lot of sleep the week I read it. I didn’t stay up all night, because I am the parent of a toddler and I value my sanity; but I stayed up till the wee hours four nights in a row because I was desperate to learn what happened next. Dare I say it? I could barely put it down.

Now, I’ll admit that neither City of Refuge nor The Fifth Sacred Thing is going to win prizes as literary fiction. The Fifth Sacred Thing suffers from the didactic, “teachy/preachy” quality that’s typical of utopian/dystopia sci-fi. The book’s setting is drawn in broad strokes: the United States government has collapsed and its remnants are controlled by a corrupt, fundamentalist, militaristic Christian sect. The land once known as California is in severe drought, and water is a scarce resource. But within the border of the former San Francisco, witches and other community-oriented, earth-loving people have formed a lovely but fragile consensus-based society that is harmoniously integrated into the local ecosystem.

Starhawk uses the metaphor of homeopathy to suggest that a tiny, representative fragment of a just society, when inserted into an unhealthy society at the right place and time, can have a healing effect that ripples out from the point of contact. In The Fifth Sacred Thing, this principle describes how the peaceful people of former San Francisco survive an army invasion and, after terrible and bloody loss of life through nonviolence resistance, convert the ill-treated soldiers to their side. In City of Refuge, this metaphor continues as main characters Bird and Madrone travel to the crumbling metropolis of former Los Angeles. There, while the converted army turns and marches on its former masters, they attempt to set up a safe place for refugees from the city who would otherwise be executed or slain.

City of Refuge is still a utopian/dystopian novel. It has parts where characters lecture each other in order to get across important background information about economics, permaculture, pedagogy, and other issues. Yet it does its teaching more smoothly and with more self-awareness than The Fifth Sacred Thing. The Fifth Sacred Thing was written by an activist in her forties whose daily work included regular direct action—no doubt an intense and polarizing place from which to write. City of Refuge was written by that same activist in her sixties, and seemingly from a place of greater reflection and humility.

At an American Academy of Religion conference I attended about five years ago, Starhawk spoke about her work with the Occupy movement. She remarked on the potentially insurmountable challenges that Occupy faced in its attempt to exclusively use a consensus-based decision-making process. As she wrote in her blog around the same time:

Sitting down in the public square to Occupy and protest an unjust system attracted the very people most impacted by the injustice, some of whom are badly wounded in ways that make it very hard to organize and live together.  When your own needs are overwhelming, and unfulfilled, it’s hard to see that other people might also have needs.  When you’ve had no voice, and somebody offers you a platform to speak and an audience, it can be hard to step back after your allotted two minutes and let others speak.  When you’ve dulled your pain for years with drink or drugs, you can’t easily go cold turkey and stop using. […Consensus] requires someone with a linear thinking mind to facilitate, who can keep a kind of outline in their head of topics, subtopics, points A B C and D.  When people come to it with the pent-up anger of years of disempowerment, it can simply compound frustration.  When the voices in your head compel you to tell the world about the impending arrival of the Space Brothers with the Mysterious Blue Geodes and you theory about how it all relates to the Mayan Calendar, being told you’re off topic just doesn’t cut it.

The idealism of City of Refuge is noticeably tempered with real-world experience. Consensus works pretty well in a well-fed group of people who have been trained their whole lives to use it; but what about on the streets with a group of starving strangers, some of whom are in poor mental and physical health and all of whom are scared and angry? There are moments when Bird and Madrone’s project simply goes off the rails, and there is no magical solution, no deus ex machina to make things right.

People die a lot in City of Refuge: adults and teenagers and children. The book presents problems to which there are no solutions, at least not in this storyline. And although there are moments of hope—perhaps even a “happy” ending—some threads are simply left unraveled.

The book also has moments of black humor that warn the audience against reading it or its prequels as strictly ideological. The Fifth Sacred Thing used nonviolent resistance as a central plot point, and many readers have assumed that Starhawk is rigidly committed to nonviolent protest. In City of Refuge, however, Maya—the character whose life story most resembles Starhawk’s—states firmly that she was never a pacifist. When challenged on her past advocacy for nonviolence as a response to invasion, she snaps, “That was a vision. I never claimed it was dogma for all occasions.”

Later, when a group of enslaved farmers is being liberated, we have what initially looks like a stereotypical utopian/dystopian teaching moment: a farmer asks how they will run the farm without hierarchy, and a member of the liberating army launches into an explanation of collective ownership. Rather than listening avidly, however—as one would expect if this were a typical scene in the genre—the starving, exhausted farmers talk amongst themselves, cry, or stare off into space in total shock. The lecture falls on deaf ears—a lesson, perhaps, in the need to give ideology second place behind compassionate response to human need.

This is what I mean when I say that City of Refuge is humble. It is not a book that present itself as knowing the answers to climate change, racism, classism, sexism, religious intolerance, or economic exploitation. Its beautiful witch heroes are compelling, but they are also sometimes naïve, wrong, or just plain foolish. Its villains, in turn, are not wholly evil, though some are quite bad; in fact, some apparent villains turn out to be needed allies for the liberating army. City of Refuge does not present situations or people in black and white terms. It acknowledges brokenness and does not always insist that that brokenness be fixed. Instead, it allows for love, and for uncertainty.

City of Refuge portrays earth-based spirituality, permaculture, sacred sexuality, nonhierarchical decision-making, collective ownership, and other politically-charged concepts. As an engaging novel, it is an enjoyable way to introduce yourself or a loved one to these ideas—and in that way, it serves an ideological purpose. However—and this is what makes City of Refuge so much better than many utopian/dystopian novels—it refuses to present these ideas rigidly or dogmatically. City of Refuge is deeper than a simple dramatization of Starhawk’s politics. For that reason, this book belongs not just in the hands of Pagans or activists, but in the hands of any reader who is struggling with the realities of this frightening historical moment. Humbly, City of Refuge offers us not simple answers, but instead a variety of ways forward to explore and perhaps make our own. 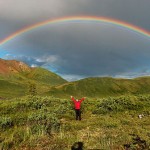 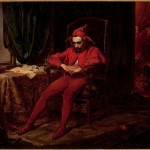 May 24, 2016 The Sacred Fool
Recent Comments
0 | Leave a Comment
Browse Our Archives
get the latest from
Pagan
Sign up for our newsletter
POPULAR AT PATHEOS Pagan
1

WitchCraft Cocktails: Persephone's Descent
Through the Grapevine
Related posts from Dowsing for Divinity