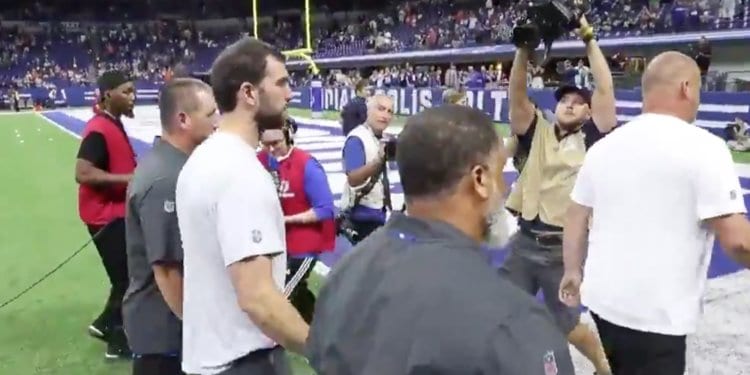 I don’t normally write about sports here, but this goes far beyond sports.

When Andrew Luck decided to retire at the age of 29, after just 7 years in the NFL, it instantly became the biggest story in sports. It was one of the most shocking announcements the sporting world has heard in quite some time. I live in Indianapolis, I am a Colts season ticket holder. I can tell you that on Saturday night, August 24th, when the story broke right in the middle of the Colts third preseason game, I was as shocked as I have been in recent memory. In the week that has passed since that shock, I’ve been following the local and national reaction to Luck’s announcement, and the reactions to the reactions. What I have noticed is this story has offered us a microcosm of one of America’s biggest problems; we are extremely reactionary and sorely lacking in empathy.

As with all things, I want to examine this from multiple perspectives. Let’s first dissect the immediate reaction to the news that happened right there in Lucas Oil Stadium that night. ESPN reporter, Adam Schefter, broke the story that Luck was retiring and that the Colts were planning to have a press conference the next day to reveal the news. Schefter tweeted this out right in the middle of the game. Since no starters were even playing for the Colts that night, the crowd, as preseason crowds normally do, were keeping one eye on the rather boring game and another on their phones. Luck, who had not played or practiced during the preseason due to a nagging and rather mysterious lower leg injury, was sitting on the Colts bench watching the game. No one in the Colts organization expected this story to be broken during this game. When the game ended, some of what was left of the Colts crowd saw Luck walking off the field surrounded by security and photographers. In the heat of that moment, quite a few boos were showered down upon the face of the Colts’ franchise and, frankly, one of the faces of the city of Indianapolis. This was a bad look for Colts fans and the national media was quick to pounce on that aspect of the story and eager to call out the fans in Indianapolis for their ignorance and cruelty. If you’ll indulge me, I’d like to stand up for the Colts fans for just a minute. Please hear me out.

The Colts fans have been asked to be patient a lot over the last decade. When the legendary Peyton Manning was allowed to get away after it looked like his career might be ending due to a neck injury, it caused a lot of bitterness among Colts fans who, understandably, didn’t want to let one of the all-time-greats just walk away. Under Manning, the Colts had experienced tremendous and consistent success, including two Super Bowl appearances and one championship. Manning’s absence meant an almost certain end to that tremendous era for the franchise. The next season was an abysmal failure, except for the fact that finishing with the worst record in the league gave the Colts the top draft pick for the next year. Enter Andrew Luck. A football prodigy, it was obvious from day one that Andrew Luck was a generational talent. The Colts organization was poised for another successful era with an elite quarterback. Under Luck, the Colts were immediately back to the playoffs and seemed to be steadily working their way back to Super Bowl contenders. But all was not rosy. The Colts offensive line, during Luck’s first several years, did not do a good job of protecting him. Even though he was putting up great numbers and getting wins, he was taking more hits than any other quarterback in the league and the injuries began to mount. The following is a list of the injuries Luck sustained in his seven years in the league:

That list should give you plenty of reasons to feel empathy for Andrew Luck and, admittedly, it should have been the same for the Colts fans who booed that night, but let’s look from their perspective.

The Colts never were very forthcoming with the details of any of Luck’s injuries. Colts fans were given dozens of assurances that he wouldn’t be sidelined too long over the years. Eventually, those assurances were proven to be useless. Luck had to sit out the entire season in 2017. During that season, they only won 4 games. Luck finally returned to action last season and the Colts’ fortunes were immediately turned around. And, what’s more, the offensive line problems were finally being addressed and Luck took far fewer sacks and hits last season than ever before. During the offseason, the Colts made great improvements to the team and Colts fans were licking their chops to see a healthy Andrew Luck with a ton of weapons at his disposal. Many prognosticators had the Colts as one of the favorites to make it to the Super Bowl. But it turned out Luck was not healthy. Fans were told there was a calf injury that was keeping him from practicing in the preseason, but it was nothing that would keep him from playing when the games started. Then the preseason games began and still no Luck. Then Colts fans were told that it wasn’t a calf injury it was a bone issue in his high ankle area. Still, the assumption was that he’d be ready to play by the regular season. Then video was released of Luck going through some throwing drills in practice and he looked sharp. That was just before the bombshell fell. So, that is the backstory behind those boos on Saturday night. Those fans were just experiencing the stages of grief. The first stage came when the first tweet reached them–DENIAL–no way this report can be accurate, Luck is sitting down there on the bench right now. Then as more and more updates came out to verify the initial report, it all seemed to be shockingly real. By the end of the game, as Luck was being escorted off the field with a security guard on each side and a bunch of photographers snapping his picture, it was obvious that there was something to this story–this was really happening. Then came stage two of the grieving process–ANGER–after all this, your leaving us? What about all the things we’ve been told? The season is about to start! How can you do this to us? We could have been contenders! BOOOOOO!!!!

It’s was not at all kind or warranted, but it was human nature. The fans had no time to digest this information. It was dropped like an A-bomb straight through the open roof of Lucas Oil Stadium and right into their laps. Certainly a less than ideal situation (thanks a lot, Adam Schefter, great timing, buddy). Truth be told, the Colts organization didn’t handle that night very well either. The moment the story broke, Andrew Luck should have been discreetly taken off the field. Having him walk off the field at the end of the game was just asking for emotions to get the better of everyone. Bad form all around.

So the national media reaction to the reaction of the Colts fans that night was every bit as reactionary and lacking in empathy as the Colts fans reaction to Luck walking off the field. Everyone pointing fingers and slinging blame without considering the whole story.

But the Colts fans were, indeed, in the wrong as well. They knew Luck’s injury history. They knew the emotional and psychological toll the shoulder injury, in particular, had taken on Luck. They also knew how he put his well-being on the line for fans, the franchise, and the city of Indianapolis. He gave everything he had to give the fans something they could be proud of. But the fans briefly lost sight of that in the shock of the moment and lashed out in emotion and anger. That moment of weakness can’t be taken back and that’s unfortunate.

And to those talking heads who’ve called Andrew Luck a soft millennial for taking his money and going home when the going got tough, shame on you (I’m pointing at you in particular, Dan Dakich). Andrew Luck is not yet 30. He is financially set for life. He is a newlywed who is ready to start a family. He is legitimately concerned that his body won’t be able to continue to take the abuse. With all that to consider, he was man enough to admit that his whole heart was no longer in the game. He couldn’t, in good conscience, face his teammates and ask them to be all in if he couldn’t be all in himself. That’s not weakness, that is strength.

This whole story should be a lesson to all of us that everyone is battling things within them that nobody else can see. We all owe each other some empathy at the very least.

August 27, 2019
The Biblical and "Family" Roots of Conservative Christian Whataboutism
Next Post

September 3, 2019 The Christian Right is Attacking the Very Thing that Allows Them the Freedom to Their Own Bigotry
Recent Comments
0 | Leave a Comment
Browse Our Archives
Follow Us!