The Biblical and “Family” Roots of Conservative Christian Whataboutism 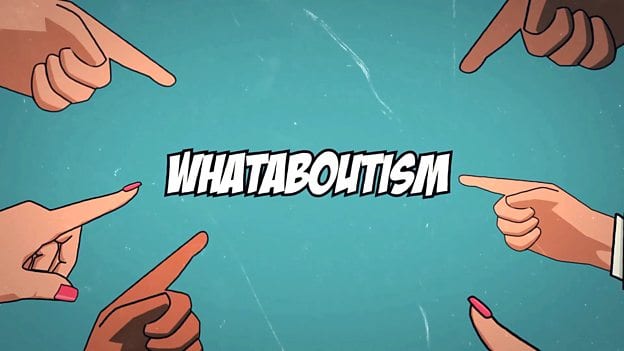 I’ve been watching the new Netflix documentary series, The Family, this week. If you are not familiar with it, you should check it out. The series is produced by Jeff Sharlet and is based upon his books about the very secretive conservative Christian organization known as The Family. The Family, also known as The Fellowship, is a US based political organization which was started in the 1930s by Abraham Vereide. The mission of the organization, which goes out of its way to remain very much under the radar, is to provide a fellowship forum for political leaders who meet regularly for Bible studies and prayer meetings. It is also the organization that is completely responsible for the annual National Prayer Breakfast, which began during Eisenhower’s presidency and has been attended, at least once, by every sitting president since. The stated purpose, though obviously treading along the line of separation of Church and State, seems benign enough. But as one learns more about the depth to which they pull the strings in Washington, it becomes chilling to say the least.

The de facto leader of The Family for most of the last four decades (until his death in 2017) was Douglas Coe. On the surface, Coe seemed to be a real man of God. He appeared to have been almost universally admired by leaders from both sides of the political aisle. Republican and Democratic presidents alike praised him. But below the surface, there was something odd about Coe and his clandestine “non-organization.” That’s where Jeff Sharlet comes in. Sharlet, in his twenties, became a part of The Family. He was accepted into a group of young, up and coming men who were used as workers for The Family. They were being mentored to become future leaders in The Family. They lived together in a beautiful mansion in the DC area. It was like a frat house with none of the shenanigans. While living among the other young family members, the budding journalist in Sharlet began to emerge. The more he dug into The Family, the more disturbing the story became.

The Family is mixed deeply into the troubling ties between the Religious Right and Russia, for instance. I won’t go into that part of the story here, you can watch for yourself to get more on that. I’m more interested in what was revealed about The Family’s influence on how conservative Christians justify the actions of their political leadership. It was The Family which supplied the housing for the Christian congressmen at the infamous C Street building in DC. It was also The Family which is responsible for the cover up and damage control of the sex scandals of congressmen who lived there. It was during this part of the story that I realized how this all connects to the rampant “whataboutism” within conservative Christians.

The Family insists it’s a fact that God chooses certain men to be in power. That power is to be held sacred at all cost, even when the men “God chooses” act illegally or immorally. When these actions go public, The Family have a very set protocol for damage control. It involves the “God chosen” leader humbling himself before the press, claiming repentance, and citing the story of King David. When I saw this, everything clicked. I’ve heard King David invoked by countless conservative Christians to justify their support of Donald Trump. It all began to make sense; the influence of The Family goes back more than 80 years and it is wide-spread and pervasive.

God uses flawed people, we are told. Obviously, assuming that you believe in God, that’s true on some level, since none of us are without flaws. But the extent to which conservative Christians are willing to extend this excuse goes beyond reason and into the depths of evil.

King David lusted for Bathsheba, another man’s wife, as he saw her bathing. That other man was a friend of David’s and one of his generals. David had to have Bathsheba, so he did. To avoid the awkward conflict, he sent his general friend to the very front lines of battle, practically ensuring his death. And so it went. Yet, God continued to use King David, and that, apparently, is good enough for conservative Christians as far as Donald Trump goes.

One obvious flaw in this position is, of course, that conservative Christians only extend this luxury to presidents who carry out their agenda to run the nation with their bigoted version of Christianity. They claim to love the Constitution, but they don’t understand (or care about) one of its foundational principles; separation of church and state. Despite the fact that our nation is anything but a Christian nation (it is a Christian nation only to the extent that it is a Jewish, Muslim, Buddhist, or Pastafarian nation), conservative Christians won’t rest until Christianity is the only religion permitted. They want it in our government, they want it in our schools, and they want it in our bedrooms–but only under the specific guidelines of their own narrow interpretation.

Thanks to The Family, we haven’t had real separation of Church and State for the better part of a century. And thanks to King David, conservative Christians have a built-in justification for just about anything Trump does.

August 29, 2019 The Andrew Luck Saga Shines a Bright Light on America's Lack of Empathy
Recent Comments
0 | Leave a Comment
""The maxim is 'Qui tacet consentire'; the maxim of the law is 'Silence gives consent'." ..."
Desperate Ambrose Appalling Silence
"I share your feelings. I find myself in the same situation as you with my ..."
Christian_Prophet Christian Trump Supporter, You Won’t Steal ..."
"Nice."
Pennybird Appalling Silence
"Bonnie. Your "itching ears" (2Timothy 4:3,4) for the worldly political propaganda from your Progressive Left ..."
notpc Christian Trump Supporter, You Won’t Steal ..."
Browse Our Archives
Follow Us!