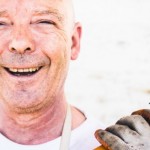 God’s Friend Request: the Extraordinary Invitation of the...
God has sent you and I a friend request. It’s extraordinary, really....
view all Evangelical blogs
Copyright 2008-2021, Patheos. All rights reserved.
Close Ad