There has always been something unappealingly puritanical to me about getting up early. It’s so Midwestern. I’m a native of a strange territory, Southeastern Louisiana, where people like to stay up late and sleep past sunrise. Like my mother, I thrive in the late night and need a good 10 hours of unbroken sleep to function. Of course, I haven’t slept like that in the 10.5 years since my daughter was born. Mornings in our house are a horror show of kids stealing my phone and yelling at each other and dumping milk on the floor and jumping on my bed. I get up reluctantly.

But the morning of my daughter’s First Confession, I was determined to be the first one up. I wanted to make the day special for her by doing what I wish I could do every morning—getting up first, making tea and breakfast and setting the table with a beautiful cloth and candles, waking her with sweet words and kisses instead of running around yelling and digging in the dirty laundry for something clean enough to wear.

I did it. Our morning was as peaceful and joyous as I’d hoped, and that evening, her First Reconciliation was exactly the momentous occasion I wanted it to be, even in our little dog of a parish church.

Charlotte was just as restless and bored and ornery as ever during the Liturgy of the Word and the homily. I took a picture of her standing outside the confessional, striking a hideous pose. It was dinnertime, she was tired, and more than anything, she was sick to death of me making such a big deal out of everything.

But then the door opened, and it was her turn, and the evening sun streamed through the windows like the very light of heaven around her, and she froze in her tracks. She turned back to me for reassurance, looking every bit the sweet and credulous child she is, and I said, “Go on. It’s okay.”

She walked cautiously into the light and shut the door behind her.

She was in there for so long I started to feel a little awkward, because all the other parents were looking at me like, who’s the mother of this champion sinner? (Of course, I thought to myself, confession will be this child’s favorite sacrament: she’s a talker, and I’ve given her a captive audience.) When she emerged she had that look one has after confession—a look of lightness, a buoyancy that comes with forgiveness and the promise of reform. She was even eager for her penance.

I went next and then afterwards we gorged on ice cream in a fit of triumphalism. The spirit is willing, but the flesh is weak.

Later, looking at that picture of her slumped over with her tongue out, eyes rolled up to heaven, I thought it was perfect. This is all of us, or at least it’s me: tired, hungry, disheveled, bored, slumping my way to the altar, sometimes completely unable to treat serious matters with any seriousness at all.

As Catholics we’re taught that the body is sacred but I’m finding it harder each year to conceive of it as such, or to see in it the image and the likeness. My body is able enough, but it’s as wayward as my will. I’m a glutton. I have almost no willpower and little self control. I’m shockingly clumsy, six feet tall with a tendency to slouch. (My high school soccer coach often marveled at my “odd gait” and was relieved when I became the team photographer.) I also have an autoimmune disorder and am prone to illness. My body seems to go out of its way to prove its ingloriousness.

There’s nothing wrong with early rising, of course, and I’m only indulging my contrariness when I say otherwise. My derision of early risers is absurd, I know, but there’s something real lurking there behind it, a memory of my stepmom’s mother, Maw-Maw Pinkie, sitting on the balcony of our vacation condo with her faux-leather NIV, getting “a good word,” while my dad listened to worship music behind his closed bedroom door. Meanwhile our family was falling apart. The whole scene made my hair stand on end, but my fuming only proved to them the devil’s firm grip on my soul and the heresy of the Catholic Church, which I’d stubbornly, rebelliously refused to abandon when my dad remarried.

I don’t know that I’ve ever felt so alone. I wasn’t like them—the Bible in my hand was just that, not “a good word” and not a comfort, especially not then when I’d so recently watched my mother die and the world fall away beneath my feet. The scriptures remained distant without candles and incense and sore knees before a body on a cross. Without flesh, they were just words, words for other people in another time, but not for me. In a family of recently born-agains, that felt like failure and even sin.

Maybe it is a failure of a kind, but I’m no longer ashamed of what my weak flesh needs to live a life of faith. Any lasting reform will require more than endless resolutions, more than sweet words, even The Word. I need physical intervention—strong coffee and kids jumping on the bed. I need sacraments, made like me and for me, both spirit and matter.

Catholics call confession the sacrament of conversion, of turning around, and it’s there, in the little room in our ugly church, that I wrench my wayfaring body back in the right direction and my soul back to belief. 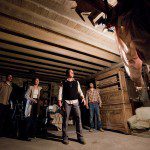 June 19, 2016
Weird Things Happened on the Set of The Conjuring
Next Post 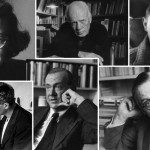 June 26, 2016 Destroy the Walls: Modest Proposals for a Renewed Catholic (and Christian) Literary Imagination
Recent Comments
0 | Leave a Comment
Browse Our Archives
get the latest from
Sick Pilgrim
Sign up for our newsletter
POPULAR AT PATHEOS Catholic
1

St. Mary Magdalene Was Not a...
Femina Ferox
Related posts from Sick Pilgrim