I still remember the first time I read The Chronicles of Narnia, about 10 years ago, and encountered the following passage:

“He’ll be coming and going” he had said. “One day you’ll see him and another you won’t. He doesn’t like being tied down–and of course he has other countries to attend to. It’s quite all right. He’ll often drop in. Only you mustn’t press him. He’s wild, you know. Not like a tame lion.”

One might say that was the catalyst of the realization that God was unpredictable. I am convinced that this conclusion can be appreciated by several people. However, in my case, it did nothing but worsen my chronic anxiety. The lion is not tamed, and that means something very simple: there are no gestures, phrases or emotions that can make it behave in a way rather than in another; he can react to your actions as he prefers; he may devour you or ignore you. But in the end it can not be controlled.

In the same way: following the commandments perfectly, abstaining from premarital sex, praying incessantly, all those things are great, but they will not necessarily bring God to your side, making your life simpler and less painful; because the relationship with God is not the same thing as having a rich and powerful friend we try to bribe by doing what he tells us in the hope of spending summer holidays on his luxurious yacht. It’s not the same, because God is not a rich and powerful human, but a divine LORD.

I still struggle to come to terms with this harsh reality, but I know that I’m in good company because in Jesus’ time the people were full of admiration, but also full of anxiety because Jesus’ way of doing things did not correspond to certain patterns within which the image of the Messiah expected by Israel had crystallized. So, alongside the first spontaneous and enthusiastic affirmations: “No one can make the signs that you do … A great prophet has risen between us … He taught them as one who has authority …” other questions were also raised:

Some look at Jesus with suspicion: “This man drives out demons only by the power of Beelzebul, the prince of demons…”; Some abandon him: “This language is hard, who can understand it?” But Peter makes an act of trust that is already a profession of faith: “Master, to whom shall we go? You have the words of eternal life. We have come to believe and are convinced that you are the Holy One of God.” [Jn 6, 68-69].

Peter acknowledges in Jesus the Messiah and the Son of God, and Jesus confirms that the confession of Peter is not a revelation of flesh or blood–that is, not the fruit of consideration of the fragile and helpless man in the face of the mystery of God–but a gift of the Father. In this way, Jesus refuses the messianic conception of the Pharisees and the Sadducees. He corrects and purifies the conception of the disciples and accepts that his messianicity manifests itself in the suffering of the cross, the obligatory passage to the glory of the resurrection.

This is what theology teaches us.

What it does not tell us, however, is what would happen if we were in Peter’s place and we had to respond to that question. Everyone here has to deal with himself. In my case, I might have said the same words as Peter. But I’m not sure Jesus would have given me the same answer: Peter’s response originates from the intertwining of his personal experience and divine grace, but my answer stems from the fear of saying something wrong. I would have used my knowledge to defend myself, to try to do something that would give me an asset.

I would have tried to control the uncontrollable.

The day I learn to trust, the day I stop wishing to defend myself, the day when the causes of my anxiety will be healed, I will learn that the lion does not want to devour me,  but let me caress his soft mane.

Andrea Ciceri is an RPG and videogame geek who also happens to have a PhD in Philosophy of Religion. Married, father of one son, he loves to cook for his family and friends. He is the proud owner of his family bookshop in Italy. 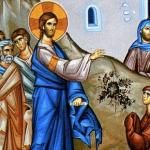 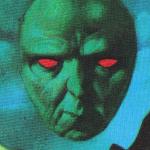 August 28, 2017 Narcissism, Exorcism, and the True Nature of Evil
Recent Comments
0 | Leave a Comment
Browse Our Archives
get the latest from
Sick Pilgrim
Sign up for our newsletter
POPULAR AT PATHEOS Catholic
1