Dark Devotional: The Firelight of Life 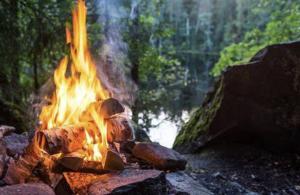 Walking along the dark path through the campground, I kept looking for the next fire, hoping it would signal that I’d found where my group had pitched their tents for the youth jamboree our church had sponsored. But there were no more campfires, it was pitch dark, and the dirt path led deeper into the mountain forest.

I was ten years old and a few steps away from becoming hopelessly lost in the woods. How did I end up wandering in the dark, searching for firelight?

After the praise and worship program that night, I told myself to stick close to the adult chaperones, warned myself that it would be very easy to get lost. But I ended up separated from my group leaders in the huge crowds of people (huge in the eyes of a ten-year-old anyway) and the evening twilight. I knew that there was a main “road” through the campgrounds, that other youth groups from our church’s denomination had set up their campsites on either side of that road. So, I found the road and started walking.

I wasn’t frightened, at least not at first. I’d been down this road earlier in the day. Our group had chosen to go rock climbing, but I’d become scared at that and one of the adults took me back to our camp. We ended up going on a nature walk through the campgrounds and out into the woods.

I knew my way around, I told myself. I didn’t need to approach another group, admit I’d become lost, and ask for help. I’d find my own way back to our site and no one would know I’d ever been missing.

But there were no more campfires, and I was starting to doubt there’d be another “just up ahead.” I paused, looked around. Then I gulped. I recognized the scenery now, even in the dark. I’d gone out beyond the boundaries of the campgrounds and was headed into the woods. The road that I’d been using was nearly gone. Had I walked on for even five more minutes, I might not have been able to find it again without a flashlight.

I turned around and retraced my steps, stopped at the first campfire I found, and asked for help. I was back at my own campsite a few minutes later. And, since this was the early 1980s, no one noticed I’d been missing and shrugged off the fact that they’d nearly lost one of their child campers on a very cold night in the Southern California mountains.

I think about that night every so often, and it’s become something of a personal parable. The unplanned nature walk that familiarized me with the layout of the camp—and that happened because I was suddenly struck by a panic attack at the thought of climbing rocks—taught me that it’s important to listen to the fears of children and accommodate them. My prescience that I could become lost, which had me on alert from the moment the meeting broke, helped me understand that I could trust my instincts (sometimes).

And while I was foolish not to ask for help right away, I did learn the importance of asking for help before it was too late.

Recently I thought of my childhood misadventure again when ruminating on what it means to be a pro-life Catholic.

I’ve considered myself pro-life since I was a teenager, long before I even thought of becoming Catholic. I grew up in the era of sit-ins at clinics, which pro-lifers liked to call “rescues.” I never attended any “rescues” myself, being too shy to join up with strangers without family support. (My parents leaned conservative but were politically apathetic, and weren’t about to waste their weekends ferrying me to sit-ins and potentially bailing me out of jail.) But I admired the rescuers, and wrote defenses of the anti-abortion movement for high school English class assignments.

After I became Catholic in the mid-1990s, my anti-abortion convictions were bolstered by the Church’s position on abortion. I was delighted to discover later that I’d first approached a local parish about the possibility of becoming Catholic the very week John Paul II promulgated Evangelium Vitae, his encyclical on the gospel of life. (Yes, in retrospect, that sounds superstitious, and perhaps it was. I still like to think it was my inner INFJ enjoying having made a “hidden connection” between my conversion and events in the wider Catholic world.)

In any event, after I became a professional Catholic apologist, I thought I’d found my purpose as a pro-lifer. I’ve never been the type who can walk up to someone and attempt to counsel her out of an abortion. But I was happy with the opportunity to explain the Church’s teaching on the life issues to clients, hoping I was helping them develop the knowledge they’d need to help women in crisis pregnancies.

In the last few years though, I’ve become more and more disheartened with identifying as pro-life. These days, the word pro-life brings to my mind the conservative politicians and fundamentalist Catholics (and other Christians) who are using their positions of power to force women to give birth, even if it means forcing those women to die in the attempt. I’m reminded of the colleague who snapped at me for suggesting he should have included more women writers in the anthology he’d shepherded to print in honor of the fiftieth anniversary of Humanae Vitae.

And I remember how I lost so many friends, mentors, and heroes when they tossed away whatever reservations they had about Donald Trump, becoming fanatic Red Hats in their determination to elect a failed businessman who had bragged openly about assaulting women—merely because he claimed to have had a pro-life “conversion.”

Is this what it meant to be “pro-life”? If so, I wanted nothing to do with it. But what if there was another way to be pro-life? What if being pro-life meant shining a light in the darkness so that those who freely choose to approach for help and comfort could find their way to safety?

It’s not easy to be a quiet place of refuge for people who may be wandering through. So much easier to call out from the side of the road, “Hey, over here! We’ll help you! We love you and your baby!” Of course, the implication is that the people wandering through require help. Perhaps they know what they’re doing and just want to be left alone. How much harder is it to trust that some of them may turn around and come back if they know they won’t be judged for wandering along on their own for a little while longer.

I’m sometimes asked how I can now call myself both “pro-life” and “pro-choice.” I see it as standing firm for what I believe is true about the dignity of the human person—while respecting each and every person’s free will to choose to do good as they understand it. If they need my input into the choices they are making, they’ll ask.

They can find me at the first campfire on the road back from the woods. 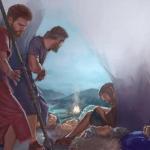 February 17, 2022
Dark Devotional: Let Me Smite Him
Next Post 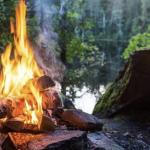 February 25, 2022
Recent Comments
0 | Leave a Comment
"https://www.youtube.com/wat..."
Theodore Seeber How Blogs Hurt (and Help) the ..."
"I agree with Jacobs. Our writer could have bowed to the altar in the Episcopalian ..."
edlondinium Dark Devotional: The Case of the ..."
"Oh dear. Shades of Pascal's wager. What I choose to do with my life is ..."
Linguagroover Dark Devotional: On the Outside with ..."
"A serious study of Catholicism will show that Jesus' Gospel message was and is a ..."
Jo Ann Elder-Nativity Dark Devotional: On the Outside with ..."
Browse Our Archives
Related posts from Sick Pilgrim