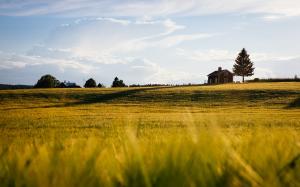 “The great wisdom teachers and mystics say in various ways that you cannot truly see or understand anything if you begin with a no.” Richard Rohr, The Sacred Now

My husband, a lapsed Catholic who began attending church again once we had small children, describes his entrance into ministry as beginning with “yes.” One morning, someone asked if he could teach Youth Sunday School. As often happens in churches, that morning slipped into weeks, then months, then years, until eventually he was drawn into full time leadership. This eventually led to a realization of his call, and pursuit of ordained ministry. This meant moving to a new state, attending seminary and pastoring a small, rural church.

For the past three weeks we’ve taken our dog for late afternoon walks in our new location, on slate stone roads with yellow weeds sprouting from the center, woods to one side, rows of corn to the other. The sun filters through the oak, pine, and poplar branches and simmers like an egg yolk on the road rising ahead of us.

One evening we walked down a street past a home where two dogs ran out to growl and bare their teeth, pacing around our dog in a circle. The owners came out, and the man spoke. “I’d appreciate it if you’d keep your dog off this road.” No problem. We turned and walked away from their house as quickly as possible. I thought to myself, This move was a mistake. The people here are crazy!

I can be quick to judge and categorize — as a young girl who moved frequently I formed quick decisions of who was “safe” or “not safe.” Who was friendly, who was open, who might accept me, who I could be friends with. It seemed to serve me well back then, testing the boundaries of each new place, but not so much today.

In retrospect, I wonder if I inherited this quick assessment of others from my rather rigid grandmother, a second generation immigrant, whose constricted way of viewing the world not only affected her social interactions but also affected how she raised her children. When it was suggested that my mother skip a grade or join a gifted program my grandmother insisted on holding her back. “She was the kind of mother whose first answer was always no,” my mom says. No to her children folk dancing in school, no to my mother having a friend over after church, no to her sitting with friends during church, no to allowing her to shave her legs, clearly a vanity, so that my mother was teased relentlessly in middle school. As a pastor’s wife, my grandmother moved often —  from the prairies of the Midwest to the Pacific Coast, and then to the wide open space of the desert. Arizona is where my memories of her begin, of myself, floating in a fiery pink inflatable ring, slathered in Coppertone. I wonder what she might have had to leave behind in her moves to each parish, what private sorrows or issues of control may have caused her to fortress herself and her children the way she did.

I want to think that it was pain or loss that caused her to be so harsh. Was her own childhood on a Minnesota farm too much for her temperament? She always told me that she hated farm life, especially feeding the chickens each morning, as they chased and pecked at her bare legs under her nightgown. Not one of her children can say that she was nurturing or supportive. In an old black and white photo I found, her hands rest on my mother’s shoulders. When I show this to my mom she is amazed and says, “I don’t remember her ever holding me.”

I want to believe that some kind of inner disarray caused the cruelty in her mothering and behavior. I want to think that it was not just orthodoxy, so that I can understand the person she was apart from her religion. I want to make excuses for this woman who could keep a perfect house and recite so many scriptures but had a hard showing kindness or allowing her children space to grow. My parents say that my grandmother helped raise me, as I spent weeks at her home while my mother finished graduate school. These were mostly happy times. But at some point, her religiosity and harshness become so entangled with church attendance that it caused a spiritual shut-down in me – a self-preservative resistance. Only by walking away from church for a time was I able to re-enter, and find my way back.

Today, our “yes” has meant moving into a brick parsonage with blue shutters in the heart of North Carolina. In the mornings we’ve seen deer, wild rabbits, and a groundhog in our unfenced backyard. But at times, I miss touching my daughter-in-laws hair and the sound of my sons’ voices so badly. It becomes a physical ache. As we drove north in our rented U-Haul, I thought of a Bible story I find particularly harsh, in which Elisha slaughters his oxen and burns his plowing equipment. He cooks meat for his people before leaving to pursue his call and follow Elijah. Is this really how God asks us to walk away from the places we’ve laid claim to, and our comforts? Burn your plow, leave your old life behind and follow? Lot’s wife turned to a pillar of salt for looking back at Sodom, but as humans aren’t we made to look back and remember? A portrait of my grandmother sits on the dresser next to my bed. There is something about her that I’ve needed to keep close to me. In the past year we’ve said goodbye to the house in Florida where we raised our children, and stumbled painfully through three consecutive moves, yet in three weeks our dog has gone from cowering at the back door, nervous of the electric buzz of the cicadas, to bounding past the edge of the woods so that we have to run and call her back.

This evening on our walk, as I scratched the fresh insect bites on my ankles, a doe and her fawn rustled from the trees on our left, then sprang across the road only to disappear into the cornfield. Our dog, usually calm and quiet, struggled on the leash, tumbling over in excitement to try and chase after them. I wonder if my grandma would have liked this place.

It smells of pine here. I’ve picked and eaten blueberries off the bush, tried collard greens, pimento cheese, and buttermilk pie. I’ve heard the scattered songs of birds in the persimmon tree, and felt the vibration in my ears and throat. I’ve tweezed two black ticks off the dog’s ears, and watched children jump from hay bales and slide on tarps down a hillside. Some days I wonder if the skies are a clearer blue than any I have seen before. Today, I am grateful to have so much space to say “yes” to a new adventure. Such a wide, open field. 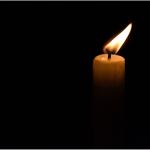 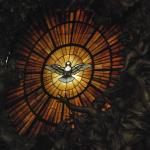 June 7, 2019 Dark Devotional: A Pentecost Meditation for the Anxious, the Pregnant, and the Judgy
Recent Comments
0 | Leave a Comment
"https://www.youtube.com/wat..."
Theodore Seeber How Blogs Hurt (and Help) the ..."
"I agree with Jacobs. Our writer could have bowed to the altar in the Episcopalian ..."
edlondinium Dark Devotional: The Case of the ..."
"Oh dear. Shades of Pascal's wager. What I choose to do with my life is ..."
Linguagroover Dark Devotional: On the Outside with ..."
"A serious study of Catholicism will show that Jesus' Gospel message was and is a ..."
Jo Ann Elder-Nativity Dark Devotional: On the Outside with ..."
Browse Our Archives
get the latest from
Sick Pilgrim
Sign up for our newsletter
POPULAR AT PATHEOS Catholic
1