When I was a freshman in parochial high school, the nun I had as a French teacher deadpanned that the French are the worst Catholics in the world. The idea of being on their best behavior for the 40 days of Lent was too much to bear, so they invented Mardi Gras (Fat Tuesday) to tide them over. Given that this particular Sister of Mercy was herself of French descent, we all knew it was tongue-in-cheek. She clearly was not disapproving of Mardi Gras, and we all laughed.

I am sure to offend my dear friends from Louisiana by daring to write as if I have any business at all going there, but I am going there–the Cajuns aren’t the only ones who know how to let the good times roll. See, I have long lived in a community that has such deep ties to Quebec that public schools taught half the day in French as late as the 1970s.  Our region has been celebrating Mardi Gras for generations, too.

For the weeks between Epiphany and Ash Wednesday, the local weekly paper publishes clues to the identity of the Mardi Gras King—King Jace (because decades ago, the Mardi Gras events were hosted by the local Jaycees)—while women compete to be the Mardi Gras Queen by selling the most tickets to a charity ball. The weekend before Mardi Gras, there is a masquerade party, great children’s events, and themed Mardi Gras balls that run simultaneously, so that you can revel your way across the region.

I’ll have you know that I even “ran” for Mardi Gras Queen one time back in the 90s. I lost to the sweetest Mémère (pronounced around here as “Mem-May,” meaning “grandma”) who had her parish, the senior center, and the Rotary Club behind her. I never stood a chance. Seeing her in her crown and robes, making the rounds of all the balls, escorted by King Jace was pretty great. I tell you what, she could dance!

In that dark stretch of a long New England winter, the Mardi Gras celebration is something special to look forward to every year. When, thanks to Covid-19, almost all of the events were cancelled this year, my heart sunk. When I heard the news, I realized that maybe my French teacher was onto something. Maybe forty days (or eleven months in pandemic shut-down) is too long to bear alone. There is a time for everything in its season, right? Aren’t we admonished to eat, drink, and be merry?  Could it be that we are supposed to have seasons of celebration, that they are as much a part of our spiritual journey as our seasons of sorrow?

I think that the same Almighty who leads us into Lenten seasons of repentance and preparation also brings us together to rejoice. So, for my Cajun friends who are driving around looking at “House Floats” instead of lining the streets for the parades this year, and for my French Canadian neighbors who are baking meat pies at home, instead of dressing up for the balls, know that Easter is coming. We will rejoice together again soon.

February 15, 2021
TKUG: Rolling Up on Lent Edition
Next Post 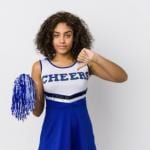 February 17, 2021 Yippee, It's Lent. Again.
Recent Comments
0 | Leave a Comment
"https://www.youtube.com/wat..."
Theodore Seeber How Blogs Hurt (and Help) the ..."
"I agree with Jacobs. Our writer could have bowed to the altar in the Episcopalian ..."
edlondinium Dark Devotional: The Case of the ..."
"Oh dear. Shades of Pascal's wager. What I choose to do with my life is ..."
Linguagroover Dark Devotional: On the Outside with ..."
"A serious study of Catholicism will show that Jesus' Gospel message was and is a ..."
Jo Ann Elder-Nativity Dark Devotional: On the Outside with ..."
Browse Our Archives
Related posts from Sick Pilgrim