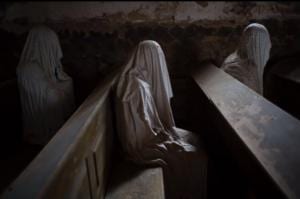 Four years ago, I parked my wheelchair behind the rows of pews in the mostly empty church before the baptism of one of my nieces. I bent my head in silent meditation, so it seemed to any on-lookers that I was lost in prayer. Was I though?

I don’t think at that time I’d prayed in a while, at least not to Anyone I thought was listening.

This church with its gothic architecture, marbled columns, and high-vaulted ceilings was within walking distance of my Catholic high school. It felt like home. Echoes of who I was filled this place. The pious little Catholic kid. But I’m not that kid anymore, I thought, sitting back there behind the pews…

I looked at the wooden bench in front of me, nostalgic for the days I was able to sit on a pew’s uncomfortable seat, hold my knees on the cushioned kneelers, and stand at attention for the reading of the gospel.

I hadn’t always been confined to a wheelchair. I used to do all the proper maneuvers.

I was very familiar with the aerobic exercise of Catholic Mass, especially here at this church. The stained glass windows, pious Virgin Mary statue, and welcoming Jesus sculpture, with embracing arms, an exposed heart, and peach-colored skin, are all visible from every pew.

A random memory of playing a game during Mass reignited. We’d grip our buddies’ hands so tightly during the “Our Father” that we hoped to make them wince.

Now I was the one who winced. I shook my head and clinched my eyes shut.

I missed those days, in a way.
But I reminded myself not to dwell on the past.

Behind my wheelchair, I turned my head to see the choir loft, reached by green-carpeted stairs in a closet out of sight. Up there, I’d sing to the Lord whenever it was my grade-level’s turn to sing for school Masses. We’d belt out awful renditions of “America the Beautiful” and “On Eagle’s Wings,” unaware of our terrible singing, but we didn’t care. Being able to carry a tune was never a priority for our mandatory choir.

Nearly forgotten echoes of our janky hymns reverberated as my eyes trailed the long center aisle from the back of the church.

Near the back entrance of the church, I recalled the ghosts of the high school class of 2004, gathered there before filing up the long aisle for my graduation. I dreaded taking this walk.

Since I was diagnosed with Friedreich’s ataxia in my childhood, I wasn’t able to walk well at the time of my graduation, at 18. So I was terrified to walk down this center aisle.

Too proud to get a walking aid, even though I needed one, I expected the God of my childhood to take care of me.

Still, I imagined myself losing my balance before all the proud parents, snapping pictures and taking videos of this important day in their children’s lives.

“Help me make it,” I had prayed silently, desperately, when it was my turn to march up the aisle.

My cousin Mallie noticed my fear, and swiftly took me by the arm, without even asking. We walked down this church aisle together, like young members of a wedding party.

I don’t think I even thanked her. But because of my cousin Mallie’s help, I walked to the front of the church.

That day I learned that Jesus would not part the heavens and come to my rescue with a climactic miracle. I learned that it’s okay to get help from others. Help doesn’t come in a chorus of heavenly trumpets. Sometimes help can come in the form of your cousin.

Or, as I realize now, help can even come in the form of a wheelchair.

My eyes followed the long aisle to the elevated stage in front of the church. There, a round sculpted altar draped with a purple cloth stands–and behind the altar, a white statue of a somber and muscular Jesus, hanging on a cross with dogged acceptance in His eyes. Even regal during his execution, He is the king of this castle.

What does this altar and the statue overlooking it mean to me now? I wondered.

My relationship to God/Jesus in my teenage years was stronger than the way most kids related to Him. This was probably due to Friedreich’s ataxia, sapping more of my abilities the older I became. So as I grew and learned to trust in my own capabilities less, I saw much truth and relief in relying on a God much greater than I–One who looks regal and welcoming in spite of suffering.

I loved the white stony expression on Jesus’ face. He endured his crucifixion peacefully, even nobly. I vowed to do the same.

One of the highlights of my faith journey was when I was asked to portray Jesus Himself in a skit for a retreat in high school. This was one of the greatest honors for a Catholic high school senior, especially for me.

During the skit, the devil-character saw a handful of worshippers seated blissfully at Jesus’ feet, then led them away one by one to introduce them to things like alcohol and drugs. Then Jesus heroically sought out his flock and invited them back to blissfully worship at His feet. The skit ended with the group almost entirely back around Jesus, except one lost soul who rejected Jesus’ attempts to welcome her into the fold again.

Jesus sorrowfully returned to his group of worshipers as the song that silly skit was set to ended with “Could you tell me how could it be any better than this?”

Pop Christianity at its finest.

I doubt that skit saved any souls, but that background song haunts me to this day.

“You are the strength that keeps me walking,”  was the line in that song that pierced me to my soul. Since walking was becoming increasingly difficult for me, I’d sing this line to myself many times. It became my mantra, and I formed a prayer from it that was related and even simpler.

I’d say this prayer to myself whenever I’d have to walk some distance. I said this prayer more and more as my ability to walk kept regressing–from walking independently to having trouble maneuvering stairs to being unable to run, and finally, to needing support to walk after high school graduation.

Even after my fervent prayer the night of graduation, God didn’t send me a miracle.

My thoughts were interrupted as the door next the altar opened, a jarring boom in the hushed place. The priest, bedecked in a red and white cassock, marched to the back of the church, near my gathered family. My niece’s baptism was about to begin.

My quiet time was over. No untrained choir nor lyrics from cheesy skits lingered in the air. No more memories to get lost in. Just me and my wheelchair, alone behind a pew.

I’ve been in a wheelchair for over a decade now. My prayer, “keep me up,” went unanswered.

Maybe my doubts that sprung up because of that aren’t evil, aren’t even unchristian.

Maybe they keep me authentic.

I raised my head and wheeled myself over to my family.

For most of my life I believed wholeheartedly and completely in everything Catholic. Believing so devoutly, and clinging to God for comfort, never allowed me to honestly question His existence.

Even if He doesn’t give me the miracle I wanted, or show up in cracks of thunder exterminating my doubts…

Was He there? In the choir’s shitty songs, watching the skit where I played Him, somewhere in the love and willingness of my cousin to help me walk?

Or am I giving credit to a myth?

I’m not sure. Even though I doubt God, I believe very much in his echoes. Things like

honesty, fairness, nobility, and above all else, the good.

So I guess the shift from a Catholic schoolboy’s beliefs to the beliefs I have now isn’t that contradictory.

Life in the years since high school has been a gradual acceptance of more disability. I held onto my faith strongly at first, but piety began to taper. If you look at all of my past writings on Sick Pilgrim, you will see a guy ceaselessly haunted by God.

And my hope is that you see authenticity too.

So God, if you exist,  you and I are going to have a long talk one day.

Matthew Lafleur is former Cajun correspondent and first Horsemen of the apocalypse, Pestilence, for Sick Pilgrim. These days, he writes less about faith and more about striving for a good life, especially while diagnosed with a rare, debilitating condition. You can check out his blog here, though he may pop up every now and then with a gift contribution to Sick Pilgrim, If the current authorities allow.

January 20, 2021
Prayers of the Faithful on Inauguration Day
Next Post