“Habits are the new radical.”

I just heard this remarkably positive story on NPR’s All Things Considered, about a vocation boom for young Dominican sisters in Tennessee. 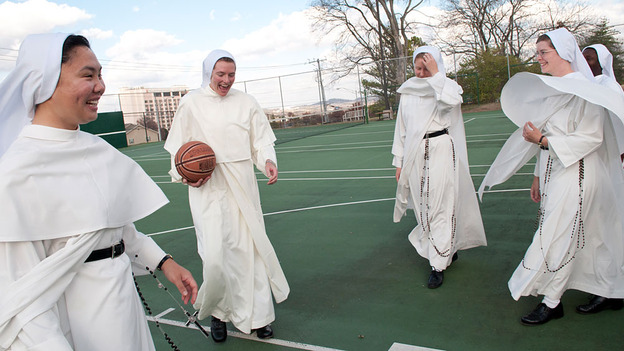 I almost never come into contact with sisters or nuns, and kind of forget they exist, to be honest, so I’m not automatically interested in stories about them.  But I defy you to listen to this story without feeling refreshed.

The story is a good read, and has accurate information that you rarely hear from secular sources — but it’s really worthwhile to listen to the audio:  Even to hear anyone speaking with such evident joy about their lives is a restorative experience — but to hear it on NPR!   An excerpt:

It’s a mysterious call to what they describe as a love relationship with Jesus. And for them it is literal: They consider the white habit a wedding gown.

“It’s beautiful, and it’s a reminder that you are a spouse of Christ,” says Sister Mara Rose McDonnell. But it’s more than that.

“It tells others that there’s a reality beyond this world. There’s heaven. We’re all orienting ourselves towards heaven,” she says.

To the world, the habit is the most visible symbol of their commitment — one they all acknowledge exacts a price.

Sister Beatrice Clark trained as a litigator before entering the convent five years ago.

“Yeah, like motherhood and children, that’s the desire of a woman’s heart,” says Liederbach. “And being desired, and pursued by a man, that’s something for sure that’s a real sacrifice.”

But Sister Anna Joseph Van Acker says she’s weary of shallow relationships rooted in texting and Twitter — and finds the depth she’s looking for in God. “He has the love you don’t find by someone leaving a message on your Facebook wall,” she says. “It’s way better than someone saying, ‘I’m eating pizza for dinner right now,’ or whatever your Facebook status says right now. You don’t get fulfilled by that. Ultimately, all you want is more. And here, we’re thirsting for more, but we’re constantly receiving more as well.”

December 24, 2010 Divinum Mysterium
Recent Comments
0 | Leave a Comment
Browse Our Archives
get the latest from
Catholic
Sign up for our newsletter
POPULAR AT PATHEOS Catholic
1

How White Men Lost the Meaning...
suspended in her jar
Related posts from I Have to Sit Down