Just enough Gores and Gateses; too many Africans

In the interest of environmental responsibility, Al Gore suggests that all African women should bear four children.

This is, at least, what Al Gore surely anticipates when he speaks of “making fertility management ubiquitously available” to African women.  He says that “If you get the health improved, if you get the availability of contraceptives, then families will voluntarily choose to have less children.”  Surely he and Tipper had good health and access to contraception when they bore their four children.

Following Gore’s example, African women should also, presumably, voluntarily choose to live in a 20-room, 10,000 square foot mansion that uses approximately four times more energy than the typical home in the neighborhood.  In addition, each African mother should maintain a luxury apartment in San Francisco. In order to save the environment, Mr. Gore encourages all African women to take several plane trips every year, and only to charter a private jet “when necessary.”

PIC African woman carrying baby and firewood “And don’t forget to buy some carbon offsets to make up for that cooking fire you’re planning, missy.”

Oh, pish tush, you will say. Al Gore’s racist hypocrisy is old news, low-hanging fruit, as it were.  It’s easy to pick on a bloated lout like him; but his point still stands, yes?  Even if the first world did their fair share to reduce environmental costs, rather than palming it off on impoverished villages on the other side of the world, those third world women would be better off if they’d just put a cork in their outrageous, unthinking fertility.  They’d be healthier, wealthier.  They’d be happier.  Why not flood them with contraception?

Here’s why, according to Obianuju Ekeocha, a Nigerian woman who actually lived in one of those impoverished African villages —  and who actually knows what it’s like to see the kind of aid that Westerners want them to have.  Her open letter to Melinda Gates is from 2012, but it deserves to be read over and over again.  She says:

Please Melinda, listen to the heart-felt cry of an African woman and mercifully channel your funds to pay for what we REALLY need.

She then goes on to describe the true needs of African families.  And here is Ekoeocha’s follow-up from August of 2013.  She explains:

[M]ore educated African women almost always choose to have fewer children (but mostly by natural methods rather than artificial contraceptives). So rather than fill our defenceless under-aged brides with Depo-Provera — which is more like a general anaesthesia that will numb them to the brutality of their reality — we can better empower them by giving them an education, which becomes the lifeline by which they can climb out of poverty one girl at a time.

Is that what the likes of Gore and Melinda Gates really want — truly educated girls?  Do they respect African women and African culture enough to help them make their own choices?  Or is that too much trouble to go to for a bunch of dark-skinned global parasites?  Do Gates and Gore and their ilk show any interest in listening to the true concerns of actual African families?  Or is all their wealth just funding another chapter in Western imperialism, where, rather than exterminating Africans directly, we brainwash them into exterminating themselves? 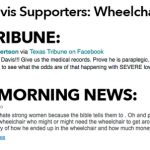 January 28, 2014 At the Register: Are You Raising Your Kids?
Recent Comments
6 Comments | Leave a Comment
Browse Our Archives
Related posts from I Have to Sit Down