Okay, this is stupid, but so many people (3) had nice things to say about the shoes that just barely appeared in my Why I Don’t Do WIWS post that I thought it would be fun to rerun this post from 2010, in which I debut my extremely cute white shoes, which I  bought on clearance at Target, and which I just wore this morning for this morning’s well dog excursion to the poop part of the yard.

I am not great with clothes shopping.  As I have mentioned before, shopping bundles together being fat and being old and being cheap into a tense, ugly ball of being miserable, effectively blotting out the pleasure of getting new stuff.

You’d think shoe shopping would be different–easier, simpler, less emotionally fraught.   You don’t even have to look in the mirror.  But somehow, I make it difficult.  I don’t know how it is, but all the shoes I come home with are just so dang stupid.

The one exception is what I was wearing today, when I took three kids for their well-child check ups.  I then drove three kids right back home again when seemingly-well child #3 threw up on previously-well children numbers 1 and 2 in the doctor’s parking lot.  Then I went to the supermarket to pick up something nice and bland for supper.  So here’s those shoes: 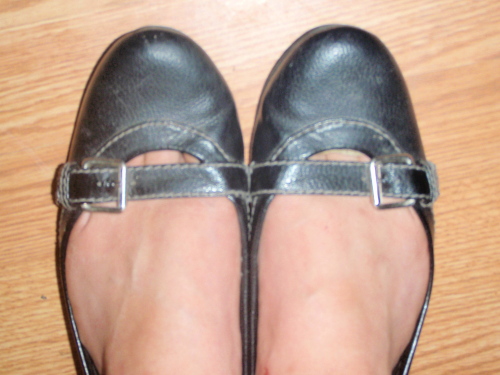 Moderately cute, aren’t they?  They’re fairly comfortable, they go click-click-click, which makes me feel brisk and capable, and they were only $3 at Target.  Believe it or not, these are my dressiest dress shoes, as well as my go-to footwear when dragging nauseated children around town.

Next, I present the shoes I actually squealed about (in my head) when I found that they were my size. They cost ten whole dollars.  For someone who generally shops at stores called things like “Ye Kingdom of Consign-a-lot,” these were a downright frivolous purchase. 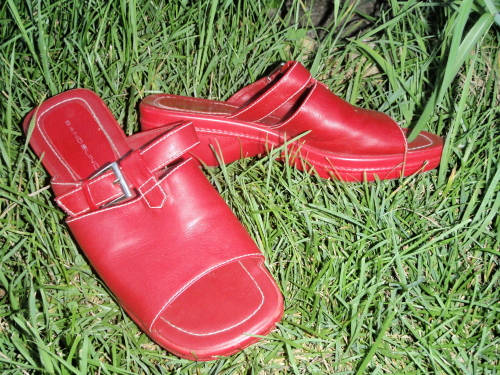 Especially when I got home and remembered that I recently made another frivolous purchase:  a bright green purse.  To go with my bright red shoes.  Fa la la la la!

Next:  my comfortable, expensive sandals which do a good shoe’s job of making me forget that I’m wearing them:  my trusty old non-deluxe Tevas. 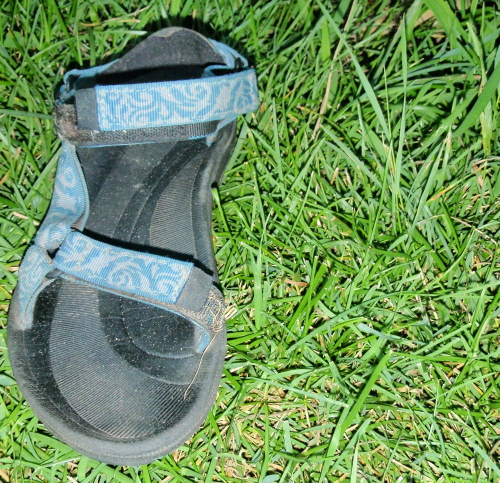 Or Teva, because I can only find one.

These next ones are the shoes I wore on my recent one-day hiking spree, because I couldn’t find my other Teva: 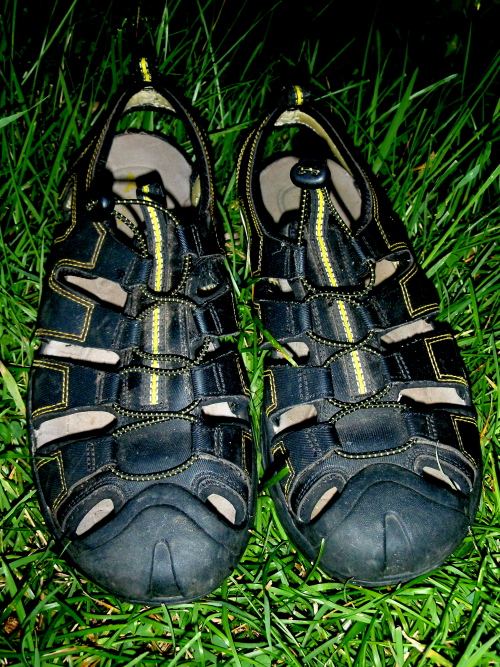 Can’t you see how malevolent they are?  I don’t know how they got into my house, but when I put them on, it looks like someone was angry at my feet.  “Take that!   Grrrrrrr, here’s some webbing with big, ugly stictching, and arrrrrr, here’s some rigid hunks of rubber.  I’ll teach you to have ten little toes and flexible skin!”  Worst blisters ever.  Seriously, they even made my eight-year-old son avert his eyes, and he really, really likes gross stuff.

Here is another shoe of mine.  I think you can see why it’s single: 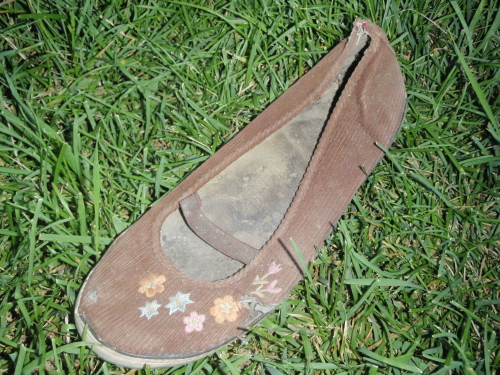 I bet her partner never even took the time to see if she has a great personality.  Poor dear.  Now she’ll have to go join the shoe convent on the porch, where spinsters spend their lives praying for the soles of others. 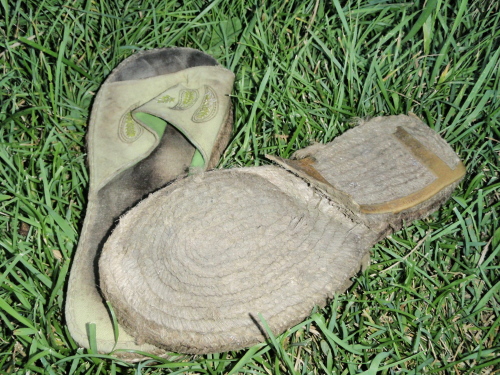 I guess these are shoes?  I don’t know.  Where did they come from, and how did they get so dirty?

My husband thinks I should also talk about my boots.  He doesn’t mean the black Gloria Vanderbilt shoe-boots I bought with a gift certificate 12 years ago. They look something like this: 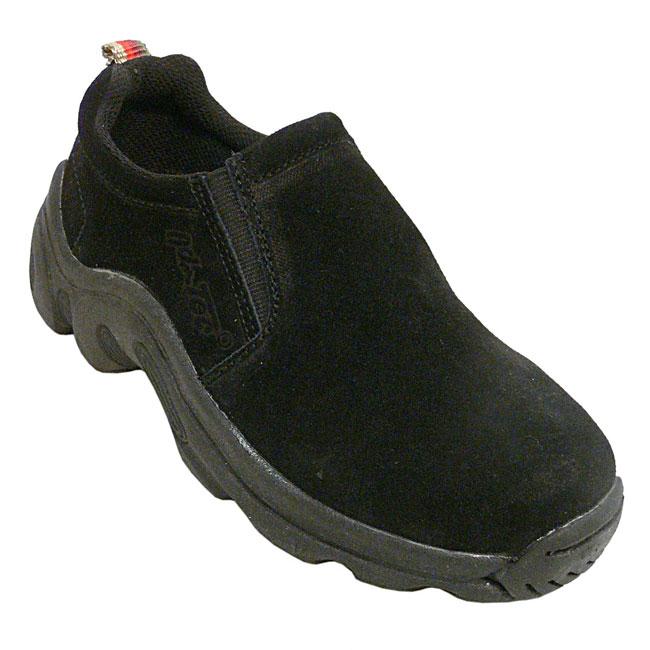 except they have crescent-shaped toenail holes in the tops, because I can never find socks, and they are shaped less like footware and more like a pair of venerable potholders.  I like them because they are black.  Also, there are two of them, which matches my feet.

But it turns out my husband meant something he laughingly referred to as my “work boots.”  I don’t know what’s so damn funny about that.  I can’t take a picture of them, because I put them in a bag marked “Salv Army,” and I have to leave them in the back of the car for a few years before I can take them out and wear them again.

But you know what?  I have a problem here.  I bought a pair of shoes.  They are SO CUTE.  They are the cutiest, wootiest shoes you ever saw.  I wear them a lot, and they fit, they’re in season . . . I don’t know.  For some reason, I guess I halfway expect people to burst into applause whenever I walk up in them.  I mean, they have silver wingtip-style toe caps!  But, at the same time, they’re heelless for that carefree spring in your step in the happy, happy springtime!  But they have a nice big elastic band so they don’t fall off!  They are the perfect shoe.  Actually, they slide around a bit, but that is totally my fault, not the shoes’ fault.  My fault.

Just look at these shoes! 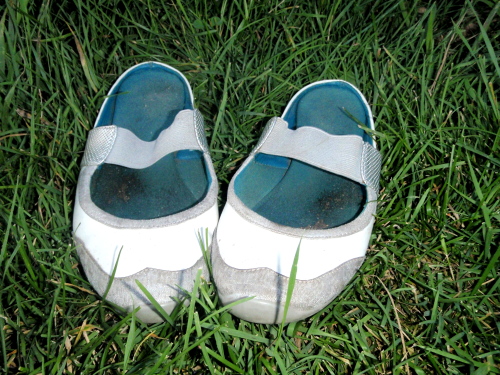 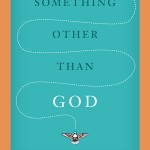 April 29, 2014 At the Register: Something Other than God: Jennifer Fulwiler's New Memoir
Recent Comments
8 Comments | Leave a Comment
"Can The Jerk have this space now that you're done with it? I mean, it's ..."
Josh I’m moving!
"Thank you."
JohnHoward The hardest part of being a ..."
"[It isn't wrong.]Prove it."
Proud Amelekite The hardest part of being a ..."
"Wonderful Ideas for newborn baby and their parents also, its good to give them handmade ..."
Jeff Mccoy Welcome, baby! 12 gifts that new ..."
Browse Our Archives
Follow Us!

Movieguide Awards: 'The Chosen' Star Jonathan...
Kate O'Hare's Pax Culturati
Related posts from I Have to Sit Down