through the lenses of Scripture, Theology and Ecclesiology, Culture, and Spirituality

Over the last year or so I prepared these lists for the  Religious Formation Conference  at the request of  Yvonne DeBruin, the very talented program director for the RFC.

You can find information about these films at the Internet Movie Database. Most of these films are available on DVD or streaming from Amazon.  You can purchase very good used copies of the DVDs from Amazon or eBay. (If they are defective in any way returns and credit are assured if you follow the protocol.)

I recommend seeing the film before you show it to any group. As the facilitator you will want to be comfortable with the film, perhaps create some questions to facilitate the conversation, and prepare for different ways the conversation might go. Some of the movies present difficult scenarios. Please note, however, that the films are listed here because to me they “speak” to the topic and present a table around which we, as religious, can gather to talk about things that matter. What is important is the context of the story and what it means rather than content analysis; looking for story and symbolic themes rather than messages. What is the movie about?

Using a narrative film or a documentary provides a pedagogically sound way to create a safe space, aside from one’s everyday and personal reality, to talk about ideas, themes, and issues that otherwise might be challenging to consider or to talk about directly. Unexpected issues may also arise. Though everyone may be looking at the same thing each one will experience it, and make meaning from it, in very different ways. This is because each person’s life experience, education, and moral, social, and faith development, are different.

A list of films dealing with prayer will be coming. You will note that many of these already deal with community, spirituality, and prayer.

Total self-giving to Christ and others in love, awareness, humility, dependence on God, not running from something but towards Someone. How do we live the vow of chastity today?

The Trouble with Angels

Green Dolphin Street – if you can get the original

This House of Brede (the book is better but…)

Lilies of the Field

The Song of Bernadette

The Seventh Chamber of Edith Stein

Dependence on God, enoughness, stewardship. and justice: how do we live the vow of poverty today?

These films refer to the question of evangelical poverty as virtue; some are about the struggle to live mindfully through ‘enoughness’, that includes a preferential option for the poor some only refer to the struggle; others are about discernment, commitment, and often, community.

Diary of a Country Priest

Life as a House

Things We Lost in the Fire

End of the Spear

Lilies of the Field

Places in the Heart

Freedom and Responsibility: How do we Live the Vow of Obedience Today?

The Sound of Music

In this House of Brede

The Keys of the Kingdom

The Year of Living Dangerously

Lord of the Rings

Fiddler on the Roof

Alvin and the Chipmunks: Chipwrecked!

The Keys of the Kingdom

The End of the Spear + Beyond the Gates of Splendor

To End All Wars

Diary of a Country Priest

Scarlet and the Black

The Inn of the Sixth Happiness

To Kill a Mockingbird

One Hundred Steps (I Cento Passi)

The Cross and the Switchblade

The Garden at the End of the World

Mother Teresa: In the Name of God’s Poor

At Play in the Fields of the Lord

A Time for Miracles

Joan of Arc (many versions)

The Book of Eli

Cinema of Communion and Community 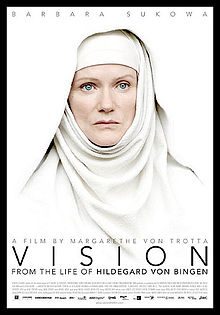 Vision – St. Hildegard of Bingen started as an anchoress and became the leader of Benedictine monasticism for women (See my review and blog post Hildegarde of Bingen: Prayer, Supper and a Movie with a Saint

Into Great Silence – Is there any value to Carthusian monasticism where members only converse on one day a year?

Keys of the Kingdom – A Scottish priest is a missionary to China; he is sent from one community, forms a new one, and returns again.

The Nun’s Story – Gabrielle becomes a religious and a missionary but does she ever feel a sense of belonging to her community, congregation?

Sister Act  – Despite its many flaws, this comedy witnesses to communion/community in authentic ways

Black Narcissus – Why is community not enough for all the sisters at their new convent in the Himalayas?  How could things have been different if the sisters had done differently?

God’s Mighty Servant – Sister Pascalina Lehnert, Secretary of Pius XII – While we can admire Sister Pascalina’s special charism and be genuinely shocked at the actions of her superior, I still wonder about the challenge that Pascalina must have been to any sisters sent to live with her and the place of her community’s charism and in her own life.

At Play in the Fields of the Lord – Protestant missionaries to Latin America clash with each other, the Catholics, and the indigenous people and culture they have come to convert. Is community even possible?

The Assisi Underground –  Based on a true story, a priest successfully hides Jewish people in a monastery and convent in Assisi during World War II requiring a deep level of communion and community among all involved.

Babette’s Feast – A French chef takes refuge from the revolution on a remote island among people of a strict Protestant sect, a community. What does Babette help them to see about who the center of their community really is?

Diary of a Country Priest – How difficult it is to be alone, yet even this sick and lonely priest takes and keeps his place in the communion of the church. The authorities ignore him but he finds welcome among the outcasts of Christ’s poor.

On the Waterfront – A community of workers seeks justice, led by a Christ-figure.

Schindler’s List – A flawed Catholic enlarges the folds of his tent to sustain and protect a community of Jewish people, hidden in plain sight from the Nazis.

Molokai: The Story of Fr. Damien – Damien chose exile to serve the lepers and went to heroic measures to maintain bonds with his spiritual community, the Church, and his parish, his community of lepers, becoming one with them.

Miracle at Moreaux – A Catholic boarding school takes in Jewish refugee children and the students come to understand one another to resist the Nazi threat. Based on a novel.

Au revoir les enfants – Based on a true story about French priests who hide a young Jewish boy among the students in their boarding school, rivalry between students subsides in the face of Nazi interrogation.

Chocolat – A young woman and her daughter, who seem oblivious to the rules but alive to charity, challenge the people of a small French town, who are complacent in their Lenten observance.

Jesus of Montreal –  When a group of young actors come together to create a contemporary version of a Passion Play, the church authorities are outraged but the actors try to become the characters they represent.

Remember the Titans – Sports stories are often metaphors for life and here team members must change, grow, to become a community that can win games but more than anything become their best selves for the sake of the whole.

Hotel Rwanda – A hotel manager in Rwanda rescues 1,000 people in the hotel he manages; everyone must work together.

Pay It Forward –  A young teen creates a network of charity by paying forward good actions, even as he sacrifices his life.

Amish Grace – A community is transgressed, grieves, and forgives in this delicately produced film about the killings at an Amish schoolhouse in Pennsylvania in 2006.

Witness – A contrast between a culture of violence and the Amish community is told in meaningful ways in this fictional story. Guns do not save the family; community does.

Mother Teresa  – Mother Teresa begins a community to be the face of Jesus to the poor. This is a rather drama-free account of M. Teresa’s story but covers all the key moments in her life, her witness and that of her sisters.