In Luke’s gospel we read:

“At that very time, there were some present that told him about the Galileans, whose blood Pilate had mingled with their sacrifices. He asked them, ‘Do you think that because these Galileans suffered in this way they were worse sinners than all other Galileans? No, I tell you; but unless you repent, you will all perish as they did. Or those eighteen who were killed when the tower of Siloam fell on them—do you think that they were worse offenders than all the others living in Jerusalem? No, I tell you; but unless you repent, you will all perish just as they did. Then he told this parable: A man had a fig tree planted in his vineyard; and he came looking for fruit on it and found none. So he said to the gardener, ‘See here! For three years I have come looking for fruit on this fig tree, and still I find none. Cut it down! Why should it be wasting the soil?’ He replied, ‘Sir, let it alone for one more year, until I dig around it and put manure on it. If it bears fruit next year, well and good; but if not, you can cut it down.’” (Luke 13:1-9)

As we discussed in A Gospel for the Earth, Jesus had called the elites in his audience to make reparations to exploited and marginalized people in their society before the response to their exploitation escalated out of control (see Luke 12:58). In our passage today, some in his audience respond by raising Pilate’s slaying Galilean rebels. Did they bring up this incident as a rebuttal to Jesus’ call for reparations in a society on the verge of rebellion?

Rome very carefully watched when any of its subservient people congregated, but it especially watched those with subversive tendencies leaning toward revolt. The Galilean Jews certainly fit this description. Being exploited nationally by Rome and economically by Jewish elites cooperating with Rome left some on the edge of rebellion, ready to throw off the yoke of Roman oppression by any means necessary. One of the ways the elite responded was to accuse the exploited rebels who hungered and thirsted for things to be put right (see Matthew 5:6) of being “sinners” getting what they deserved. Jesus called them blessed.

The elites were victim-blaming. The oppressed class’s failure to put things right was not because they lacked moral uprightness. It was the result of an almost insurmountably heavy system that had been designed to work against them, violently if need be.

As we all respond to COVID-19 now, where do you see injustices in our society being laid bare, amplified, and pushed to a breaking point? Are you seeing those most vulnerable being blamed today? Who is defending the system now? Who is calling repeatedly for change?

There are some parallels between Jesus’ context and our own economic and political breaking point. The story in Luke invites us to ask: how can we stand in solidarity with vulnerable people who are hungering for things to be put right, right now?

May 13, 2020 Growth For Growth’s Sake (Part 2 of 3)
Browse Our Archives
Related posts from Social Jesus 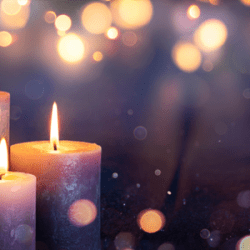