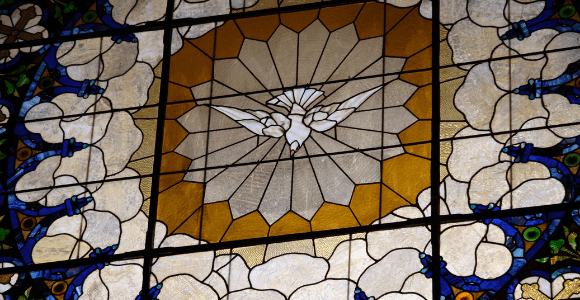 What I now understand (and love) is the fact that the early Jesus community was comprised of those on the undersides and margins of their society who were in deep need of advocacy or justice socially, politically, and economically within their own societal structures.  This is the context in which I understand the work of the Spirit as Advocate to bear the most life-giving fruit.

One of the social issues facing Jesus followers in the book of John was being removed from the synagogue. This is a large topic which space does not allow for here.  But I do question whether this actually ever happened. Much of the history between Judaism and Christianity is not characterized by Jews persecuting Christians but Christians persecuting Jews. This was written during a time when Gentile Christians were wanting to distance themselves from their Jewish siblings under the Roman Empire. What better way to do so than to villainize them. The following passages include anti-semitic language. We must be honest about this. My purpose in sharing it is to illustrate that John’s idea of the Spirit as an Advocate was as an advocate between humans in matters of justice not between humans and the divine in matters of sinfulness and holiness.

Consider the following passages in John’s version of the Jesus story where being removed from the synagogue is a penalty for Jewish people who follow Jesus.

“His parents said this because they were afraid of the Jews; for the Jews had already agreed that anyone who confessed Jesus to be the Anointed would be put out of the synagogue.” (John 9:22)

“Nevertheless many, even of the authorities, believed in him. But because of the Pharisees they did not confess it, for fear that they would be put out of the synagogue.” (John 12:42)

For that first audience, “advocate” would have called to mind actual legal proceedings Jewish leaders initated against Jesus’ followers. The theme of being brought to trial appears in the early synoptic gospels as well:

“When they bring you to trial and hand you over, do not worry beforehand about what you are to say; but say whatever is given you at that time, for it is not you who speak, but the Holy Spirit.” (Mark 13:11)

“So make up your minds not to prepare your defense in advance; for I will give you words and a wisdom that none of your opponents will be able to withstand or contradict.” (Luke 21:14-15)

“When they bring you before the synagogues, the rulers, and the authorities, do not worry about how you are to defend yourselves or what you are to say; for the Holy Spirit will teach you at that very hour what you ought to say.” (Luke 12:11-12)

The Spirit as Advocate would have first and foremost been heard by John’s original audience as an advocate in matters pertaining to this life.  Early Christians were not concerned with saving people from post-mortem realities as much as they were focused on caring about people’s social condition in the here and now.

We have confirmation of the spirt as an advocate in the context of people’s social conditions in the very beginning of Jesus ministry in Luke’s version of the story.

We’ll unpack that and how this might apply to us today in our final installment.

May 19, 2022 Social Advocacy (Part 3 of 3)
Browse Our Archives
Related posts from Social Jesus